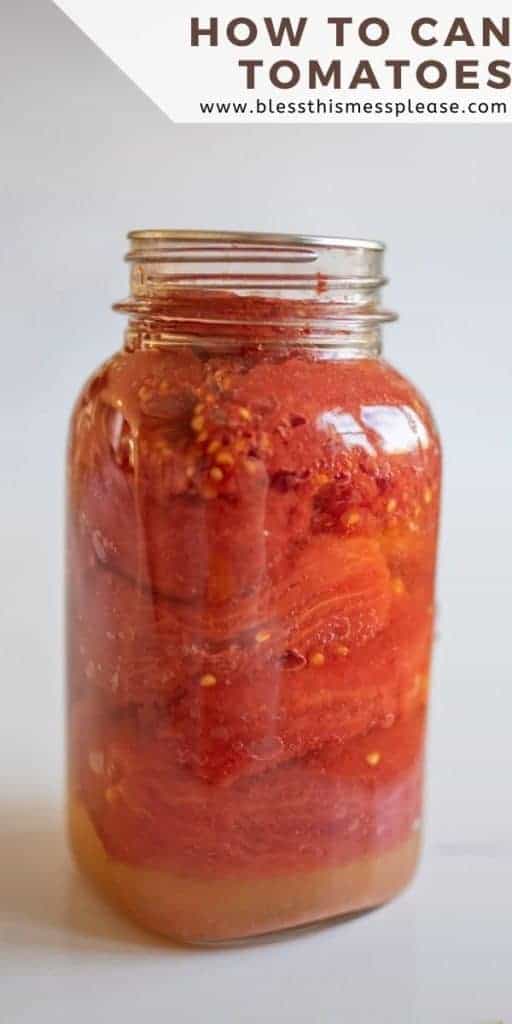 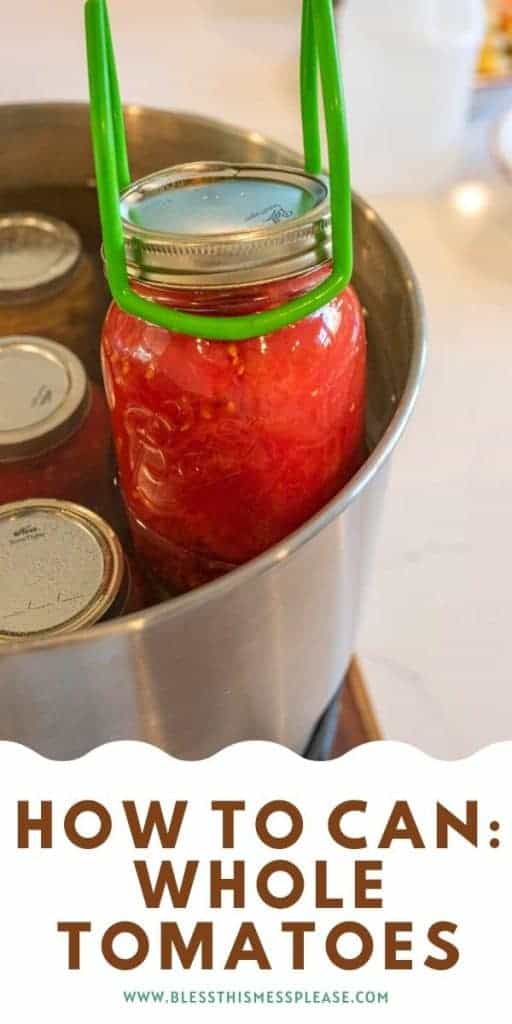 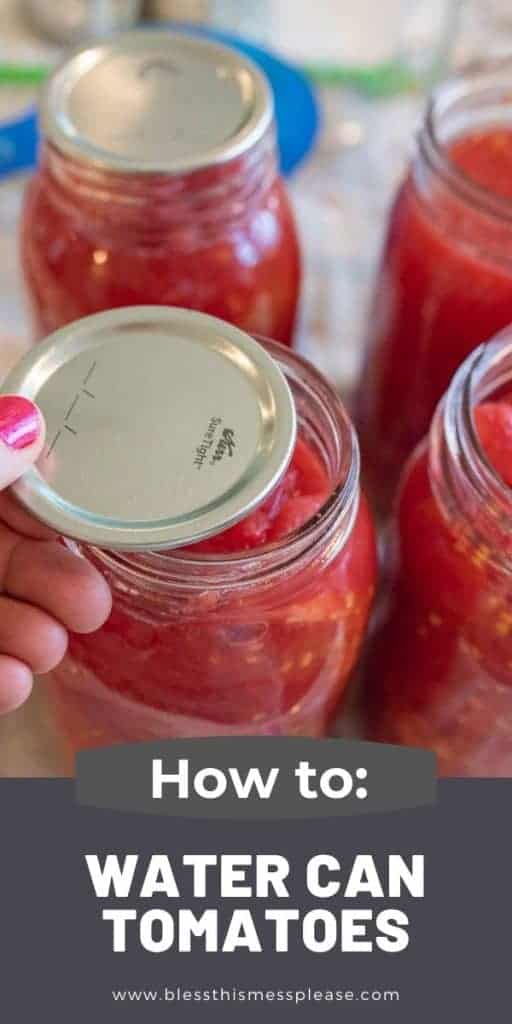 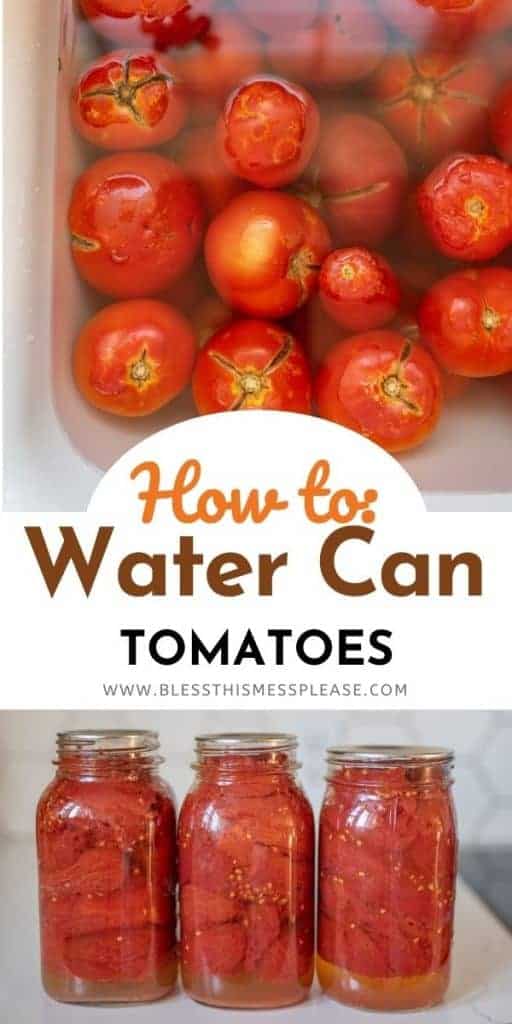 Do you know the best way to save tomatoes at the peak of the season?
Can them! I’m going to teach you how to can tomatoes so you can
have a taste of summer all winter long.

How to Can Tomatoes

Canning tomatoes might seem like a lot of work, but I promise once you do it a time or two, you'll get into a rhythm and it doesn't really take that long.

Canning tomatoes is a great way to make the summer bounty shelf-stable. And canned tomatoes are one of the easiest things to use later in the winter because they are a stand alone ingredient. You can use canned tomatoes to make salsa, make pasta sauce, add them to soups, stews, and chili, and more! I love how versatile they are.

Before we get into all the details, let’s talk food safety. When canning
tomatoes you need to be aware of the acidity. Tomatoes are considered
a high acid food but newer reports are finding the PH to be borderline.
To combat this and prevent food borne illnesses, like botulism, add 2
tablespoons of bottled lemon juice per quart of tomatoes.

Small steps like that and following directions fully are best practices for home canning to keep your family safe.

How do I know if I canned correctly?

After you have boiled the tomatoes and removed the hot jars from the canner, let them sit a few hours. During this time you'll often here a ping or popping sound, that's the lids adhering to the jar as they cool. After a few hours of cooling, lightly tap the lid with your finger. The flat lid will feel firm and won't spring back or pop up and down when touched. Think of it like a safety seal on other jars from the store. It won't move when sealed and it'll pop up and down if it didn't seal properly.

You can reprocess (boil) jars that didn't seal the first time. Be sure to check the top lip of the jar for any chips in the glass and wipe the top well to clean it. Chips and chunks of food will prevent the jar from sealing. Process with a new clean flat lid the second time. It will still need to boil the full amount of time the second time around.

I try to use my canned food within 1 year of canning it. It's generally fine longer than that, but the goal should be to use them within a year for best flavor and texture.

What kind of salt do you use when canning?

There are a couple of options for salt. You can use pickling salt which is basically just pure salt (it doesn't have anti-caking agents or iodine). If you don’t happen to have that on hand, use kosher salt and they will turn out great still, it's a very plain salt too.

What type of tomatoes can I use and how many do I need?

The type of tomatoes doesn't matter a lot, you can use traditional round tomatoes or oblong Roma or San Marzano. I have canned lots and lots of kinds of tomatoes. The meatier oblong tomatoes make for meatier canned tomatoes, but I still like traditional tomatoes for canning too. I just mix whatever tomatoes I have ripe together in the jars.

Following the recipe is a full picture tutorial on how to can tomatoes AND recipes to use them in.

Full guide on how to safely can tomatoes at home with step by step pictures, printable instructions, and more!

Supplies Needed to Can Tomatoes:

If you are new to canning, you can always ask around to see if anyone you know has a water bath canner they aren’t using. I also have great luck finding things like that used at thrift stores.

When I moved into my house with a glass-top stove (you’re not supposed to can on glass top ranges), I bought a Ball Fresh Tech Electric Canner. This is my third canning season using it and I really like it! That might be a good option for you if you are in the market.

The actual process of canning tomatoes is pretty simple.

First, you need to wash the tomatoes. Next put them in boiling water until the skins split, about 3 minutes, depending on your tomatoes.

Second, prepare your clean jars by adding 2 tablespoons of lemon juice to the jars to prevent food borne illnesses. I like to add about 1 teaspoon of salt too.

Slip the skins of the tomatoes off and remove the core.

Use a funnel to fill up the jars with the prepared tomatoes, cutting them into pieces to better fit the jars.

Fill each jar with tomatoes and their juices. Leave ½ inch head-space from the top.

Third, Remove any air bubbles by running a knife along the side of the jar.

Wipe the rims of the jars clean, add the flat lids, and screw on the rings.

Fourth, this next step is called water bath canning. You've made it to the actual canning part! Place the jars in a lukewarm water bath making sure that there is water a couple of inches above the jars.

Bring the water to a boil and start the timer. Processing time will depend of altitude. See recipe card for more details.

Finally, after the processing time is up, remove the jars and cool before storing.

Recipes to use home canned tomatoes:

I use home canned tomatoes like I do store bought! Note that they do have more liquid than a can from the store, so if you need to drain some off for a recipe do that.

Because the tomatoes have not been diced when I open a can I'll often just use my clean hands to squish the tomatoes into smaller pieces as I pour them out of the jar. They have been cooked so they are very soft and fall apart when you squish them very easily.

With just a little bit of effort you can enjoy tasty tomatoes in all of your favorite soups, sauces and dishes. Learning how to can tomatoes has been a huge blessing to our family. Give it a try!