As you might know we raised two lambs this summer for meat. I introduced them, shared our sadness when one died, updated you on them, and then things went quiet.

If you've assumed the lambs are now in our freezer, you are right!

It's taken me a bit of time to decide on what pictures I should share, process how I feel about the situation, and I had a baby a few weeks before the lambs were killed so I just haven't made the time. So after a few requests to know what happened to the lambs I'm now ready to fill you in.

I thought an overview would be timely.

Here are the first two lambs that we got last spring. One of which died a few weeks later, we assume from eating too many sweet pea plants (more details on lambs and sweet peas here). We were pleased as punch to have our first livestock on our budding little hobby farm and they were so stinkin' cute!

And all summer they grew and ate and lived at our garden property: 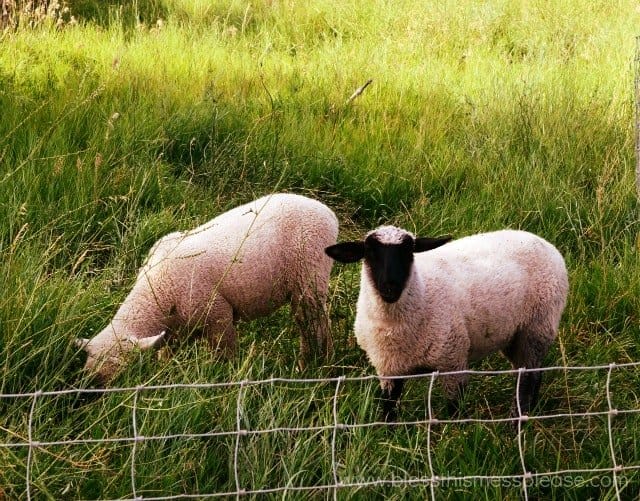 The munched on your fruit trees much to our dismay, but we have such a large property with so much grass that it just made sense to have something there eating all that free food! 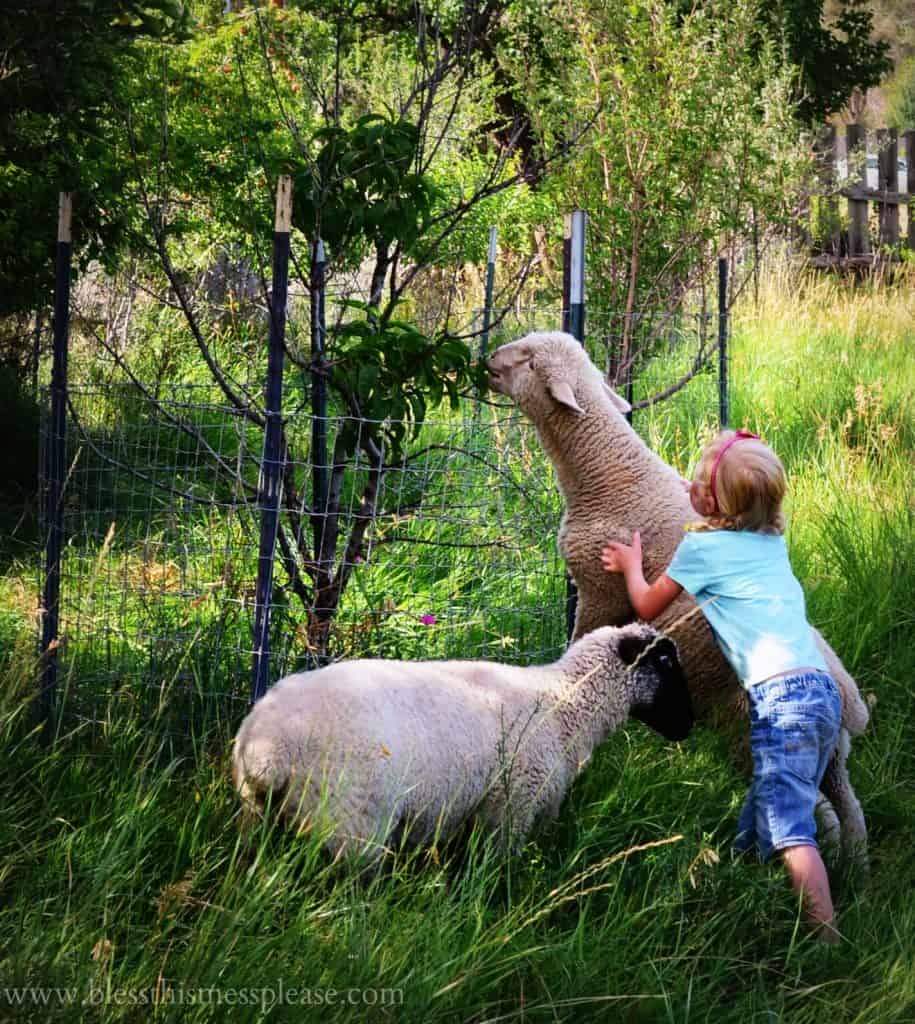 And then they got bigger... they jumped out of their fencing, ate my garden, destroyed my chicken coop by jumping on it, and got into The Shanty and ate all of the chicken food. Naughty, naughty lambs! And then one day when I was hugely pregnant, and of course Thomas was our of town, one jumped over the fence that surrounds the whole property and was loose in the streets of town. I had way too much invested in the lambs to not get it back into the fence where it was safe, so me and my 8 month pregnant belly (with 3 small children in tow) chased that animal all over until I finally got it back where it belong. And then I worried and worried that it would get out again and get killed. The worry was making me sick! I worried out loud to a good friend the next day and she sent her boys over to help. Those amazing friends packed the lambs to their house and kept them with their goats.

I wanted to just kill them as soon as Thomas got home so that they wouldn't be a bother to our friends, but they convinced us that they didn't mind them there and that we would get more meat if we waited. So the lambs lived at their house for around 6 week. I would pick up wind-fall apples to take to them, pack over green corn stalks, and feed them old garden veggies (hello giant zucchini). The lambs and goats ate well, played well, and I didn't have to worry. 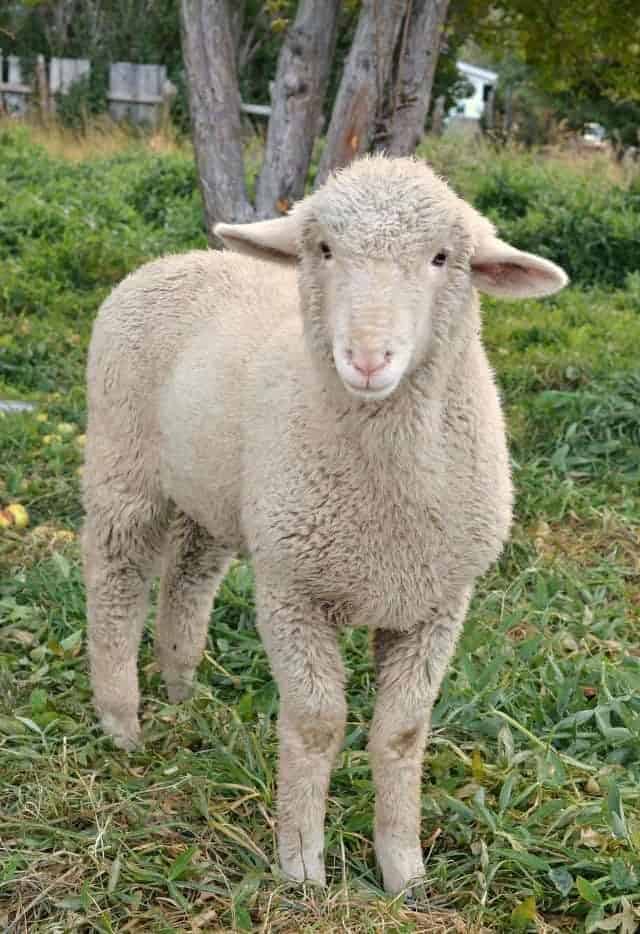 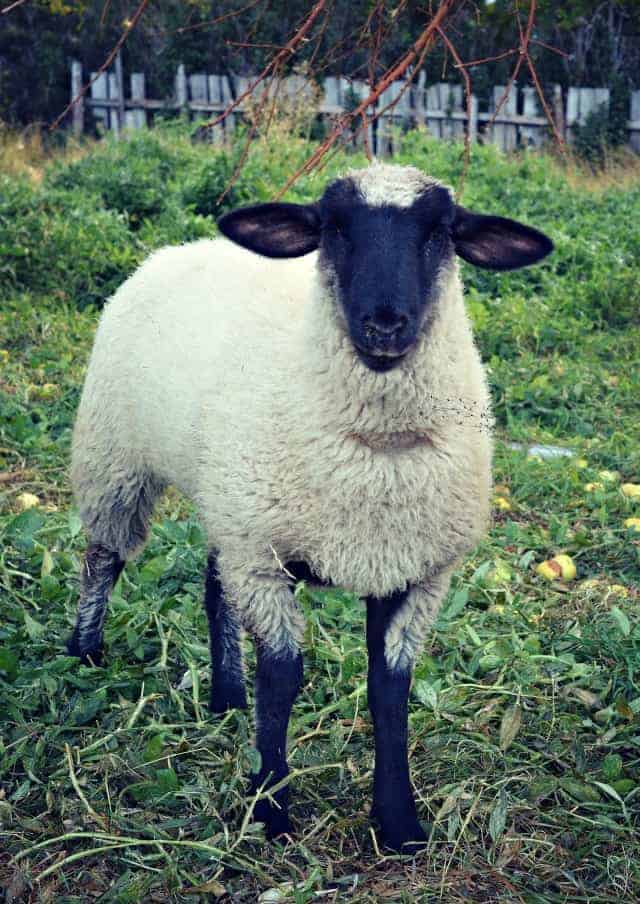 We planned all along to have a friend who owns a meat processing shop to do the kill and the butchering. They are also who we bought all three lambs from. They processed the pig that we bought from my niece this summer and we really liked how well everything was cut, packaged, tasted.

Our friends, who the lambs were staying with, convinced us that lambs were pretty easy to process and that we could do it ourselves (with their help of course). So one Friday evening in November Thomas went to their house and he and two of their teenage sons killed the lambs with a single shot to the head. We didn't tell the kids where their dad was going or what had happened until Sunday afternoon. It was easier, and I think better, to tell them after the fact. They knew all along that the lambs were meant for meat but they didn't need to be thinking about it while it was happening. I didn't even ask many questions of Thomas until a few weeks later.

When I did ask, I was pleased with what Thomas said. The lambs were just fine. They didn't know what was going on. They weren't scared. The death was done and over quickly. I've watched some pretty awful movies about the commercial meat industry (motivation for raising your own meat indeed!), and I know that our lambs lived a happy life that came to a very non-dramatic end. They were well taken care of and had a good life until they fulfilled their ultimate purpose.

After the lambs were dead Thomas helped to skin and gut them. They hung the bodies in a tree over night (the weather was cold), quartered them the next morning, and then let them age in a fridge for a few days.

After the meat aged it was time to process it. This happened on my kitchen table. Our friends came over with their big kids, played with my little kids, bounced my baby, and showed us how to cut up a lamb.

The picture is terrible, but you get the idea... 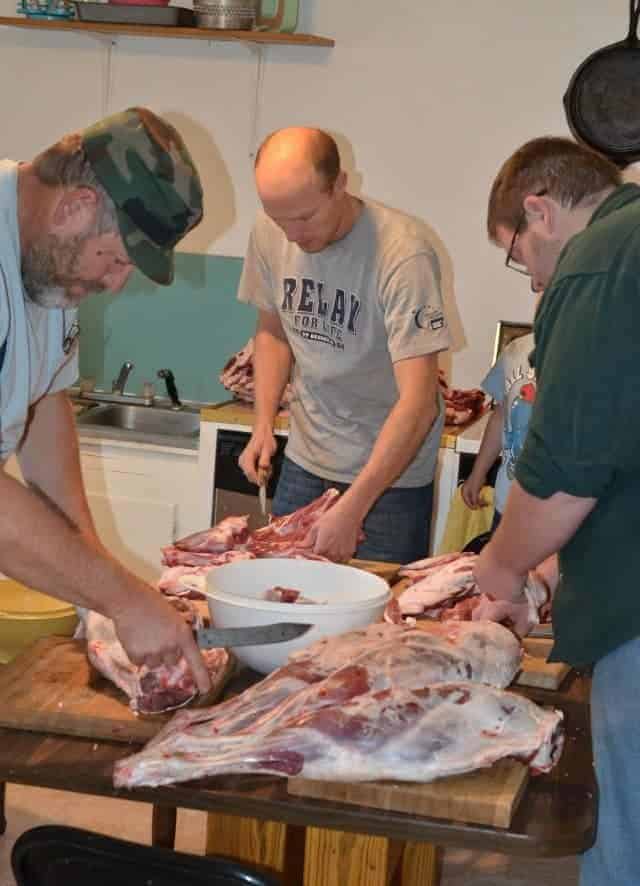 We did lots of roasts, lamb steaks (cut up tenderloin which are excellent), stir-fry meat, rack of lamb, ribs, and also ground a bunch for lamb burger. We cut it up, wrapped it, and got it in the freezer in about 3 hours (minus the burger which we did later). Cooking it has been an adjustment but I'm starting to get the hang of it and we are liking it quiet well.

So many people tell me they don't like lamb. Here's my thought on that - you just haven't had it prepared properly. Any kind of meat, prepared right, can be delicious! Lamb is no exception.

I'm mad at myself because I took the time to weight and measure all of the meat as we wrapped it in preparation to put it in the freezer and then lost the notebook I wrote it in. I wanted to know how much meat we ended up with and what the price per pound was. I love details!

So here's an estimated breakdown:

We got around 50 pounds of meat from both lambs combined which puts the meat at $4.26 per pound.

If you don't include the price of the lamb that died the total would be $148 which would put us at closer to $2.96 a pound.

And that doesn't include things that we already had - a trough we found at the Shanty that still held water, fencing we rummaged up from my Father-in-Laws junk piles, a gate that was just in the backyard of our rental. Looking around for what we needed instead of buying it all new made a big difference in the total cost.

Processing the meat ourselves was a big money saver as well and it was something that Thomas really enjoyed learning. It's a super practical skill and he's grateful our friends would take the time to teach him. Paying someone else to do the work would have totally changed the cost of the meat. It would have cost $30 per lamb to have them come and kill them at our (or our friends') place and another $35 per lamb to butcher, wrap, and freeze. That would have added an additional $130 to our total for two lambs, raising the total to $343, making the meat closer to $6.86 a pound.

Thomas probably spent 2 hours at their house the night they killed the lambs and then we spent another 3 hours at our house the day that we cut and wrapped the meat. Our time is worth something but I think the newly learned skill pays for time spent. Plus, it was a lot of fun to stand around the table with busy hands talking to and enjoying our friends. 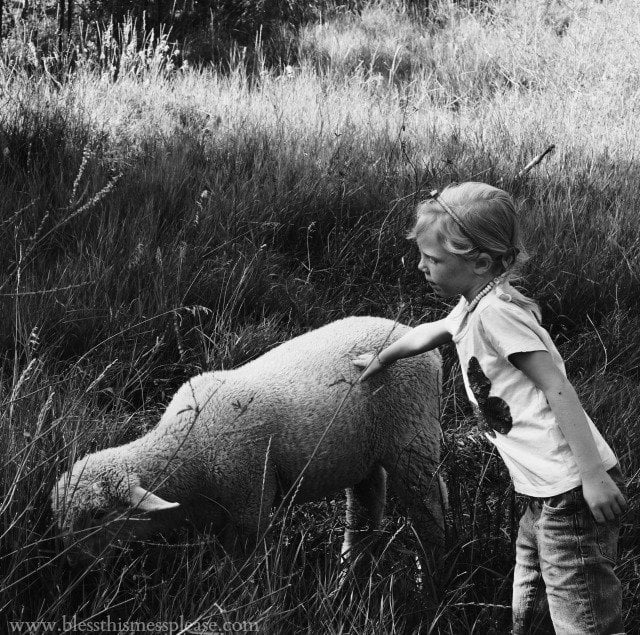 So will you be finding us raising lambs for meat again next year?

The jury is still out. Thomas totally thinks the price, the time, and the effort are worth having lambs. We paid nearly nothing to feed two animals for over 6 months because we have  all that grass that just grows and grows. Plus, he's loving having so much meat in the freezer. I am definitely preparing more meaty meals this winter because I have it.

I on the other hand have more reservations. I like that lamb but it's not my favorite. I think I'd be happier raising a few hogs or turkeys for meat. My Hoosier heart loves pork and I'm much more comfortable preparing it; I've had a lot more practice with pork and turkey. And there were definitely some frustrations with raising such capable jumpers. That being said, the learning curve on something like this is surely a little less steep the second time around. I'm still undecided.

The kids are on Team More Lambs. They liked having them around during the summer, they aren't traumatized by their departure, and they are loving the meat as well. Our daughter, who was definitely the saddest about the lambs dying, likes the meat the most. She calls herself a little carnivore and very much enjoys eating meat; she'll tell you that her favorite food is steak. I think she likes meaty meals even more than her Dad! As we've discussed the possibility of raising lambs again she has chimed in that she'd like that. I'm super proud that she knows where her meat comes from and enjoys it so much. You can read more of my thoughts on why we raised our own meat here.

And there you have one lovely little updates on how raising lambs for meat went.

What do you think? Could you eat lambs you raised?