Saturday was an awesome day filled with productivity and check marks next to major projects that have been clogging up my mind and to-do list for way to long. We did some major cleaning and weeding at the garden; I mowed down knee-high weeds like it was my job. We built a portable chicken run (post coming soon!) to accompany my coop and moved all the chickens, young and older, to the garden property. Productivity is magic to me and Saturday was full of said magic.

I went back to the garden after the kids were bathed and in bed just as dusk was setting in to weed a bit more. The world was generally quiet, all of the ants had gone to bed, the evening dip in temperature was so welcome, and I could hear the lambs eating and rustling in their sweet pea patch. It was one of the those moments where a deep sense of peace and contentment settled over me. I was in my happy place.

Moving the little chicks in with the hens has had me stressed. The big girls aren't very nice to the little ones and I just hate it, but it's a transition that had to happen sooner or later. So after church and naps we walked over to the Shanty on Sunday, something we probably wouldn't do under normal circumstances, but it was the hens first full day being all together and I wanted to check on everyone. While I'm checking on the chickens my brother goes into where the lambs are fenced off to say hi. He yells my name and tells me to come here. He then shows me his sad sad discovery. Freckles was laying there, lifeless.

Freckles died sometime between 10pm the night before and 3pm that day but by the looks of it she had passed sooner in the day than later. There were no obvious signs or causes of death from what we could tell. We asked a friend who has a bit more experience to come over and take a look and he couldn't tell us much. It was nice to have a second opinion though.

Thomas brought over the backhoe and we dug a nice deep grave for a lamb; made complete with a sweet pea bouquet. 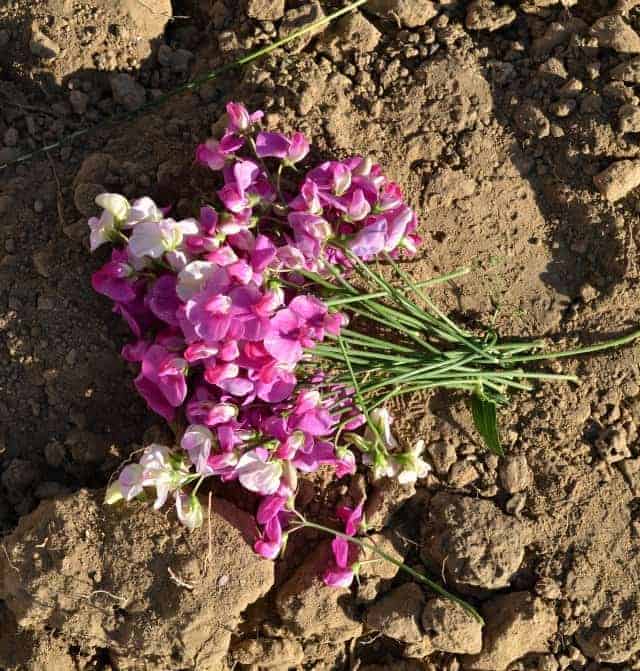 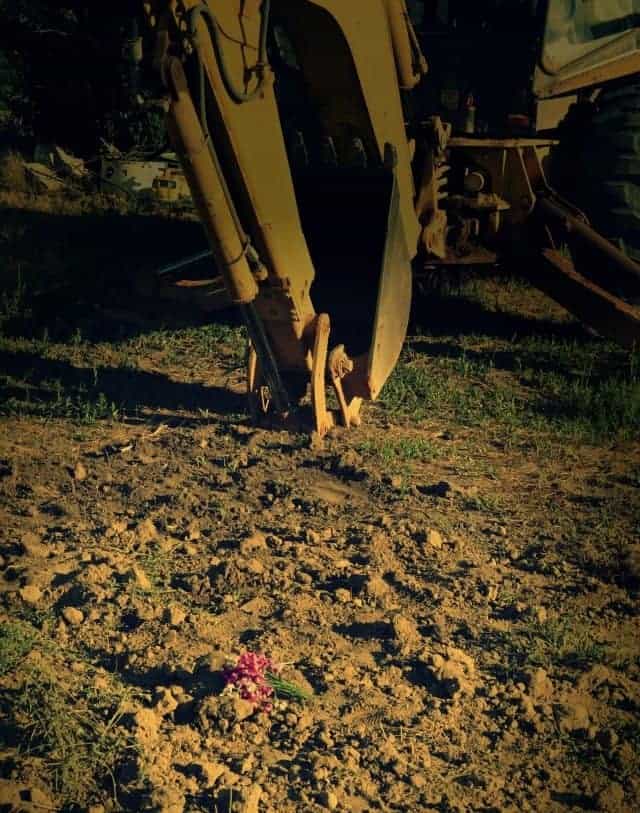 May was really sad. Freckles was more "hers" than the other and she had picked her out. She had a good cry and then we were able to talk some about death and the things she was feeling. I want a hobby farm for so many reasons and one such reason is so that my kids can learn essential life lessons via animals in the safety net of their own home. I think witnessing the miracle of birth and the heartache of death are two of life most valuable and memorable experience. Getting a taste of those experiences with all their feelings and emotions on a small scale, through the life of an animal, while your Momma is there to hold your hand seems like a really healthy thing. Death is hard but inevitable, so being able to process and digest it a bit seems like great lessons to be part of childhood.

I felt a lot of different things. I was pretty shocked; I just didn't ever think about one of the lambs dying before a pre-chosen date. I felt really frustrated that I didn't know what caused it or how to prevent it from happening again. I also felt like a failure of a hobby farmer. I mean, I did loose half of my livestock in one day! Half. I did have a lot of consolation in the fact that, as far as I know, I did all that I could for that little lamb to live and be happy. It's just hard when your best doesn't seem like it's enough.

As sad as May and I were, Snowy the other lamb, was a hot mess. He was OK until we took the body out of their area to bury and then he went crazy. He started crying and running round in large circles. It was awful to hear and watch. He calmed down a bit before we left but was still crying. It's hard to describe his cry but it's the most pitiful and forlorn thing you've ever heard. I went back Monday morning to check on him and he was still crying. I hadn't decided what we would do up until this point but his bawling helped me decide. He needed a friend.

I called up the lady we bought the original two from to see if she had any lambs left and she did. She wasn't able to bring another over that day but promised to deliver a lamb the following day, Tuesday. I went over Tuesday afternoon to weed and check on everyone and Snowy was still crying! Poor guy. Later that night our friend called and she was on her way with another lamb!

We went over to meet them and lead the new black-faced lamb, fondly known as Blacky now, to the fence and put him in with Snowy. I was curious as to how Snowy would react. You know what happened? The cutest thing ever. Snowy was at the gate and Blacky walked right in, they touched their foreheads together upon first meeting and then ran off to start eating. They ran around together the entire time we were there and Snowy's crying stopped completely. Happy as a clam.

So we have two lambs again, both boys this time, and all I have to show for it today is a not-very-good phone picture.

Cute huh? This lamb weighed 77 pounds when she dropped him off and she charged me $75 though the going rate for lambs at auction this weekend in our area was $1.04 a pound. So now I have $195 in to two live lambs. I'm still curious how much they will cost in the end, so I'll keep you updated. At the moment it's looking like it's going to be some pretty expensive meat. Oh well, we are in it for the journey as well as the end.

Thanks so much for enjoying this hobby with me! Be on the look out for chicken posts this week too!