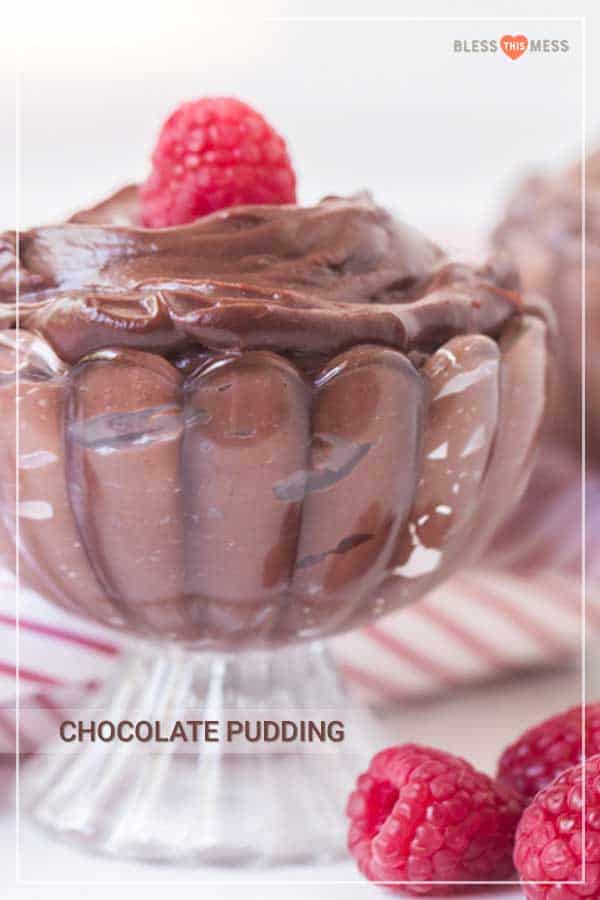 Homemade chocolate pudding is a simple, lavish, and chocolatey delight that you can make for dessert, after-school snacks, or anytime you need to satisfy your sweet tooth!

This recipe comes together quickly and then you let the mixture set in the fridge for a few hours to get a silky, rich pudding that you'll love snacking on!

There's something delightful about homemade chocolate pudding made from scratch. It's rich and silky and smooth and just tastes like a swanky treat, even if you're enjoying it on a regular weeknight. Plus, it's approved by both adults and kids for a sweet treat -- it's not too fancy or decadent that people will turn their noses up to it (unless they're just not a fan of chocolate, in which case, are they even human!?).

You can also make a batch of this and use it to fill a pie and top with whipped cream. Absolutely divine. I like to send a small tupperware of it to school in packed lunches instead of the single-serving, store-bought options, because at least I know all the ingredients in this one and it's a fun surprise for the kiddos to crack open on their lunch hour. Once you see how simple it is to pull together, this chocolate pudding recipe may be your new go-to treat to stir up all the time. And I wouldn't blame you for a second!

What's the difference between chocolate pudding and chocolate mousse?

One of the main differences in pudding and mousse is their consistencies, which is determined by how each dessert is made. Pudding is cooked, which activates the cornstarch and thickens it up, while mousse is not cooked, just whipped and so it has a lighter, fluffier, airy texture.

What is chocolate pudding made of?

My chocolate pudding recipe calls for sugar, cornstarch (the thickening agent), salt, cocoa, half and half (or whole milk), egg yolks, semi-sweet chocolate chips, butter, and vanilla. If you don't want to use half and half, I've had great luck just subbing in milk -- it's less creamy and rich but still very tasty!

How is pudding made?

Pudding is made by combining most of the ingredients in a saucepan over medium-high heat, letting it simmer for a few minutes minutes, and then stirring in the chocolate, butter, and vanilla until everything is melted. You then cool it in the fridge for a few hours until everything is set!

How do you store homemade pudding?

After the pudding is set, it stores best in an airtight container in the fridge for up to 5 days. It's starts to get watery and break down after longer than that.

How to make chocolate pudding:

Homemade chocolate pudding is a simple, lavish, and chocolatey delight that you can make for dessert, after-school snacks, or anytime you need to satisfy your sweet tooth!

This post was originally published in 2012, and has been updated and rephotographed in December 2019.

Chocolate pudding is a nostalgic, sweet, rich, and silky treat that is simpler than you might imagine to make and so fun to enjoy no matter the occasion!