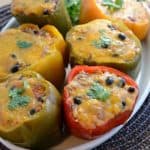 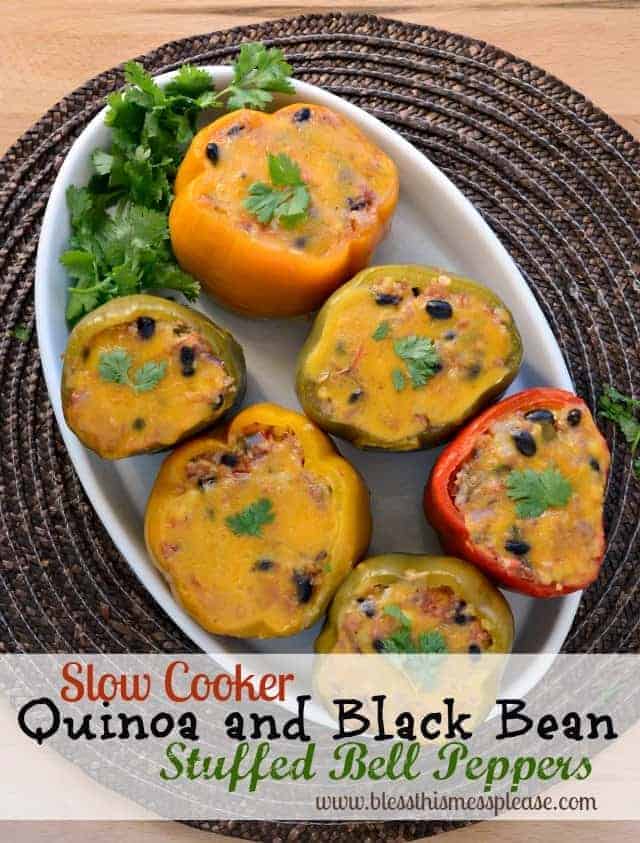 A few weeks ago my friends over at America’s Test Kitchen sent me an email asking if I wanted to try out a brand-spankin’ new cookbook that was just released and they also wanted to know if I’d host a giveaway. It took me about a half of a second to respond with a big old yes! If you are new to the blog then you might not know my love for America’s Test Kitchen, fondly referred to as ATK.

A few years ago my husband bought me three of their cookbooks for Mother’s Day and it was all love and sunshine from there. I make and post lots and lots of their recipes here (like the world’s best chocolate chip cookies, lightened up stove-top Mac-n-Cheese, and the most delicious rustic Italian bread). I’m always super pleased with how recipes turn out and I really like all the extra tips and tricks that their books include. I get smarter every time I crack one open!

Slow cooker stuffed bell peppers are loaded with all kinds of delicious things like quinoa, black beans, corn, peppers, onions, cheese, and more. If you aren’t into quinoa or don’t know what it is you can easily sub in cooked rice instead. The filling is so ridiculously full of flavor and made, by far, the best stuffed peppers I’ve ever had. 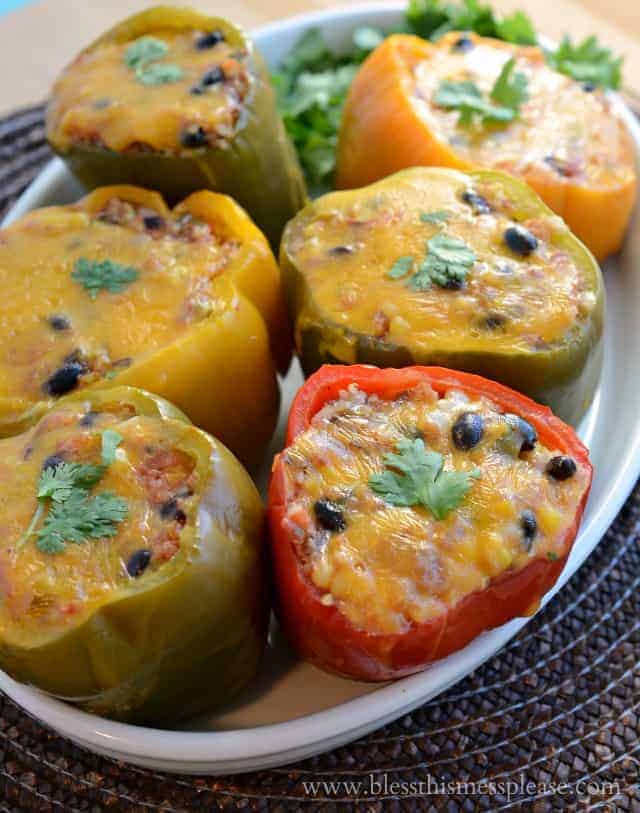 I was a little worried about what the slow cooker would do to the peppers but they came out perfectly tender and delicious, without getting mushy. This was one of the best Meatless Monday dishes I’ve made in a long time and one I’m putting into my regular recipe rotation (say that three times fast!).

Two of my three kids didn’t love the outside peppers but they polished off the filling in no time; one gobbled up the whole thing. Even with them not eating the whole pepper they still really liked the meal, and I consider it kid approved.

I bought the colored peppers but I grew the green ones in my garden! Aren’t they pretty 🙂 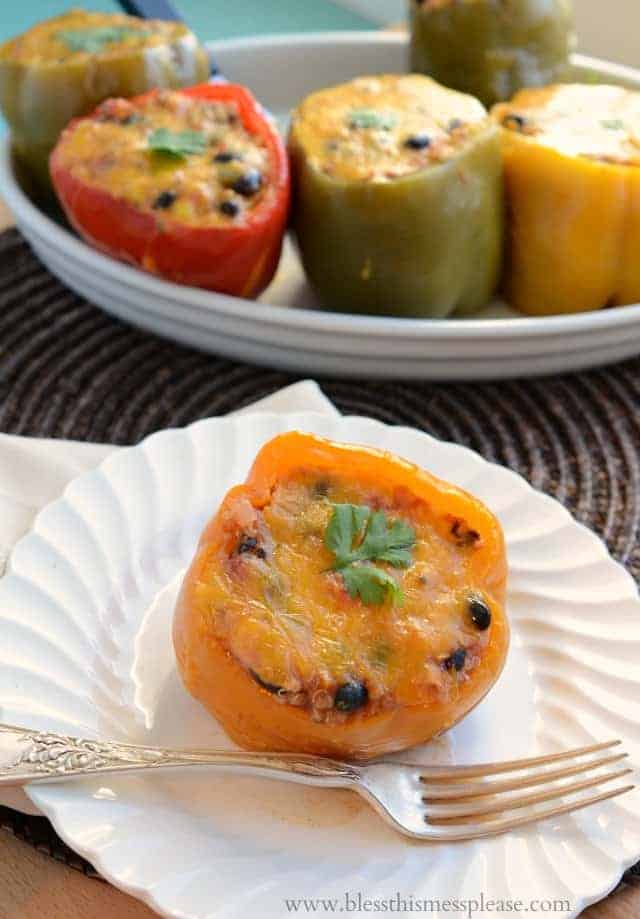 The original recipe called for Monterey Jack cheese and cooked rice instead of quinoa. I also added the cumin.

I made a recipe and a half because I have more than 4 people to feed and it worked great, but the recipe as written is for filling 4 peppers. 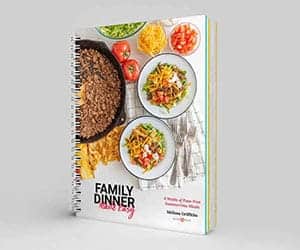 Get 60+ simple recipes sure to please even the pickiest eaters, plus 8-weeks of grocery shopping lists already planned for you. It’s time to breakup with the stress and guesswork of figuring out what’s for dinner! 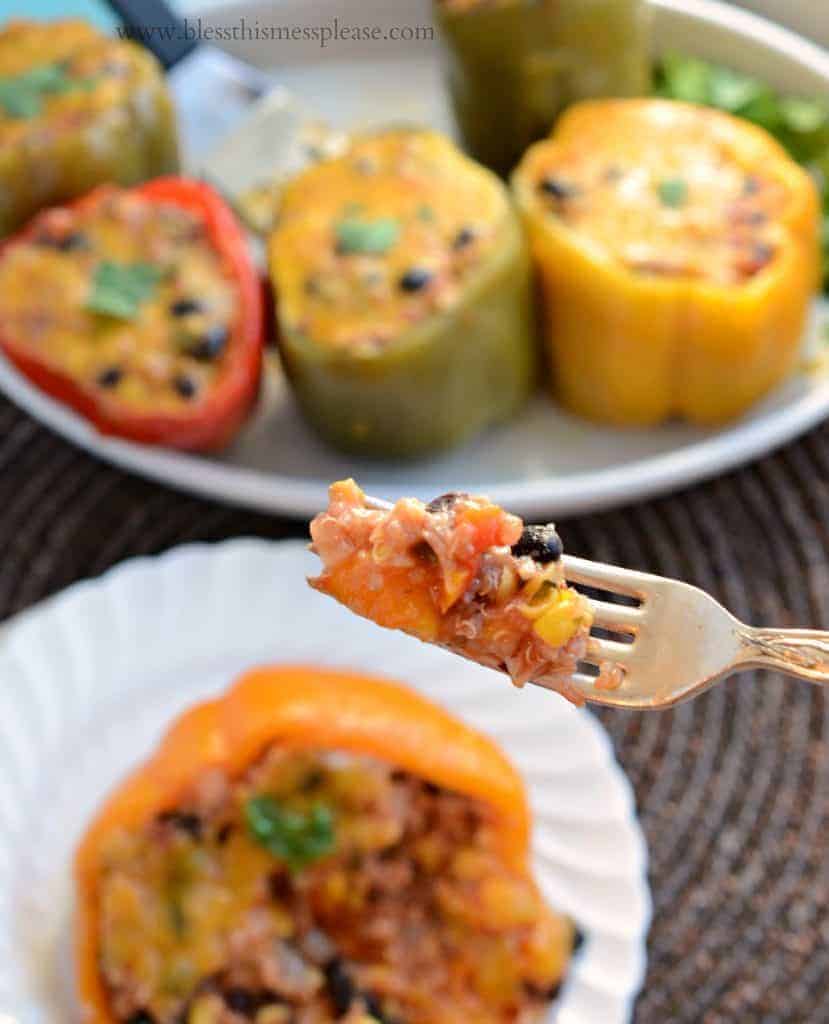 Good luck and thanks so much for stopping in to say hi! I sure like you guys.

Can you please email your recipe to me? The site is not loading the ingredients or instructions and this is my favorite recipe! I should have printed it!

It was a glitch on my end and it’s all fixed now, the recipe should be in the post like normal! Holler if you need more help!

I tried this recipe last week and because our local farm only had very small peppers, I had quite a bit of the stuffing left over. I put it into a dish and stored it in the refrigerator for a couple of days. Tonight, I took it out, put cheese on top and warmed it for about 20 minutes at 350 degrees. We ate it on tortilla chips with salsa and sour cream and it was delicious. Next time we make it, we’ll leave the cheese off, letting those who so desire, add it to theirs individually,
and it becomes vegan for my niece to eat.

3 to 4 hours in a slowcooker v. 30 minutes in the oven??? Dont u think cooking in a “slowcooker” will make a considerable difference in the electric service/gas bill??? Ill go with the 30 minutes oven. Bless

I made these the other night in the oven,and they were delicious! I used red quinoa and it was delicious. Wish I could share my photos of it!
This is now part of my regular dinner routine. My boyfriend loved them!

Katie! I’d love to see a picture… I’m pretty sure you can share them on my FB page which I would LOVE! I’m not too much a quinoa ninja and have only tried the white. Is red the same? How is the flavor? I’m going to have to look for it! I’m so pleased you are getting good recipe inspiration too. Your comments totally made my day.

I just stopped by your Facebook and LIKED it. Although I can’t figure out how to make a post of the peppers I made?

can you make with rice? I dont have a crock pot can you do with oven?
thanks
I am a new cooker, just learning my way around the kitchen.

Rice works great! And yes, make it in the oven… I’d put it in a baking dish and cook at 350 until the peppers are soft, maybe 30 minutes? Enjoy!

ATK is the best! I love their cookbooks and all of the tried and true tips. And who can go wrong with more slow cooker recipes?

Crock pot is the ONLY way to go… and America’s Test Kitchen ROCKS!!!

Hi I popped on over from Facebook, I read your posts frequently.

I’m so proud of your work and I love always learning new things from you! Keep up the great work. <3