Oh the shower that I must use.  It's a strange little shower surround really, just standing in the room.  It's tiny and generally yucky.  I can't bend over to shave without hitting my head and the floor near the drain is saggy.  I'm positive if I'm not careful I'll break through the floor and fall into a dark abyss during my shower.  Not the most relaxing thing to think about while showering.  Now don't get me wrong, I am grateful for indoor plumping!  I will not, however, miss this shower when it's gone. 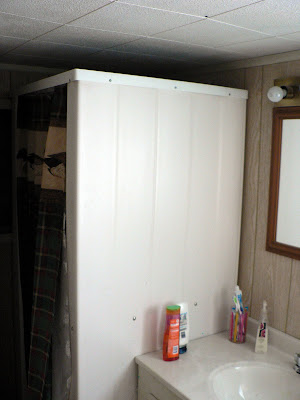 Here's another story about the shower.  When we first started remodeling we would stay the night occasionally on an air mattress and work here the next day.  I refused to shower here.  I was so creeped out by it.  I would wait until we got back to our apartment to shower.  After we completely moved out of our apartment it took me DAYS to get enough courage to shower.  Gross right!
The main problem was the lack of water pressure.  You had to be really careful when turning on the water and IF you were lucky you would get a full 4 little streams of water to come out of the head.  It was cold and miserable to have 4 trickles of water to shower with.  It literally took me 30 minutes to wash and rinse my hair.
One late night, after hours of shoveling plaster out of the house, I came into shower.  I turned on the tiny trickle, got in, and started bawling.  I think my tears created more water than the shower. Thomas came in the house and promised to look at the problem the next day.  That he did.  He unscrewed the shower head and out fell 2 little rocks (sediment from the water heater that hadn't been used in a long time).  The shower worked fine after that.  Now why didn't I do that sooner?!?
Here's the plastic shower head:
Can you spot the creeper Care Bear? 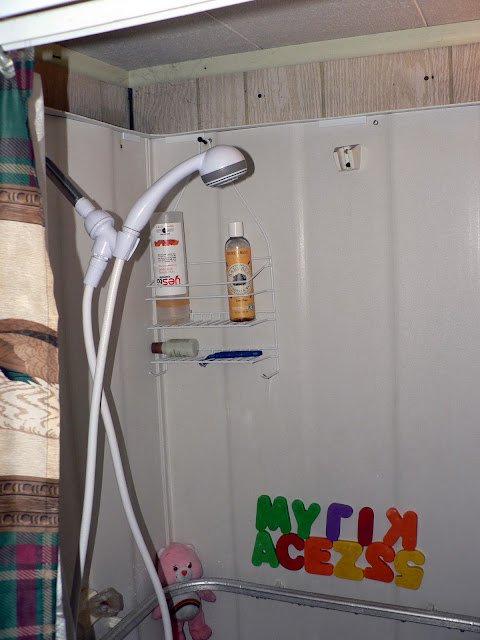 Now why a post about my shower?  Because my luck could change!  My friend Chrissi is hosting a killer giveaway for one of these little babies: 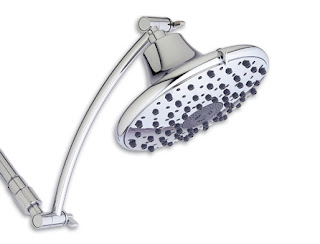 Please bless me shower gods with a big fat win!

Update:
I totally won! Now I just have to get the new bathroom in to put up this sweet shower head!

If you are new to the blog we are in the middle of remodeling our house. Phase one (kitchen, living room, and one bedroom) is coming to a close. After 8.5 months of living without a sink I am in love with the new space. You can see a tour of what the house looks like as of July 2012 HERE. But you have to see where we started to really understand.

All of our house remodeling is located under the "Our Biggest Mess" tab at the top. Including my favorite posts, crazy things we've found in the walls of our house. You seriously won't believe what we've found!

So say hello so I can get to know you too,  and take a minute to check out my train wreck of a house. We've come a long way in the last 10 months and we have a lot more left to do.

I'm sharing this crazy bathroom over at Thrifty Decor Chick, and I bet I have the ugliest bathroom there! You have to have a "before" to have an "after" right? 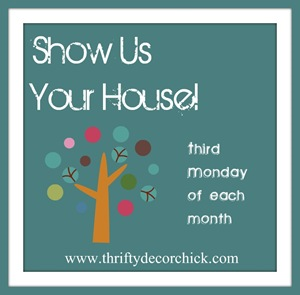