House Week is turning into house month! And it's only going to get better.  My dad is flying out this week for 10 days.  You heard me right!  A live-in construction worker for 10 whole days. I'm beyond excited to see my dad and to have help on the house. There will be lots of progress and lots of updates!  Thanks for letting him come Mom.  I know you'll miss him.  I'll keep him fed and in clean clothes though.
Now on with the update. After we spent lots of time making sure things were straight, supported, up to code, and ridiculously sturdy we started electrical wiring. Those little blue boxes were a sure sign of progress. I kept things clean while Thomas went about his work. I assumed that we would wire and then insulate. Thomas woke up New Years Eve day with a grand plan in mind. "The bombshell" as I like to think of it.
New Years Eve day was a Saturday. We get lots of things done on Saturdays! His dad comes from a few hours away to help and they work the whole day. I love Saturdays. Thomas woke up and decided it was time to remove the stairs we use to access the kids' basement rooms. It was time to transition to using the new stairs. This took me by surprise. I thought we would do this after we moved into the other part of the house. I didn't think much of it. A friend took the kids for a few hours and we started knocking out things.
By noon my house looked like this:
The green blanket in the top right hand corner goes into our big room.  We used to have stairs there. The white door right next to the green is our bathroom door.
There's a lot more to this story! I'll finish it after the pictures. 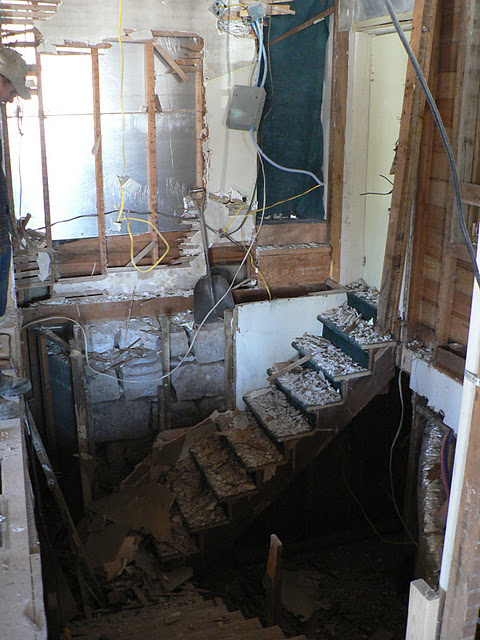 The stairs that used to be between the big room and bathroom/house exit were now gone.  It took all day to get things somewhat back together. We put up temporary railing to help make things a little safer, but it's still pretty scary.
Looking down the hall. 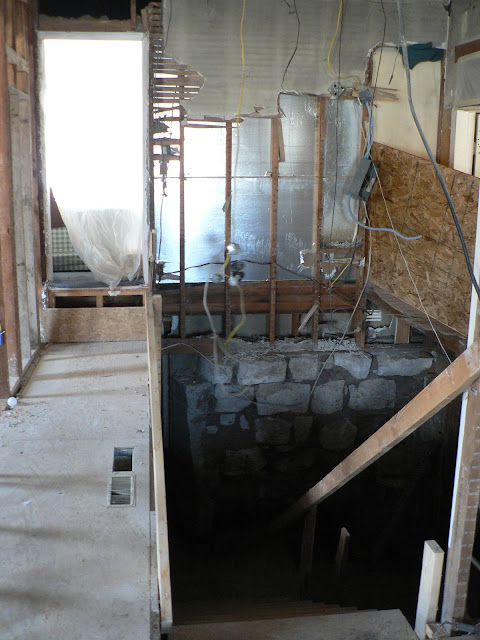 End of the hall into the kitchen. 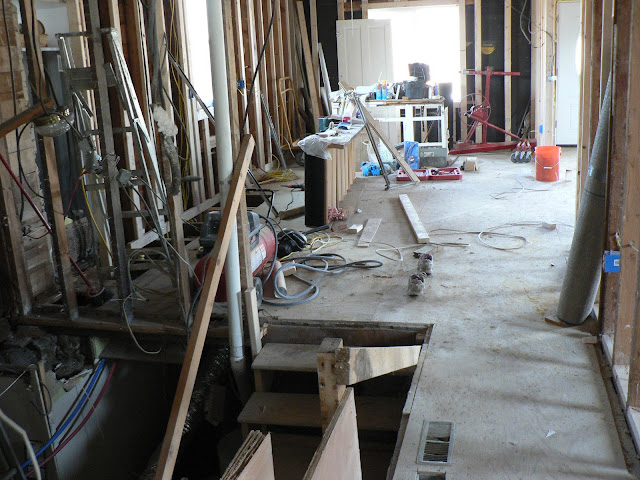 Our temporary railings so no one falls right into the hole! 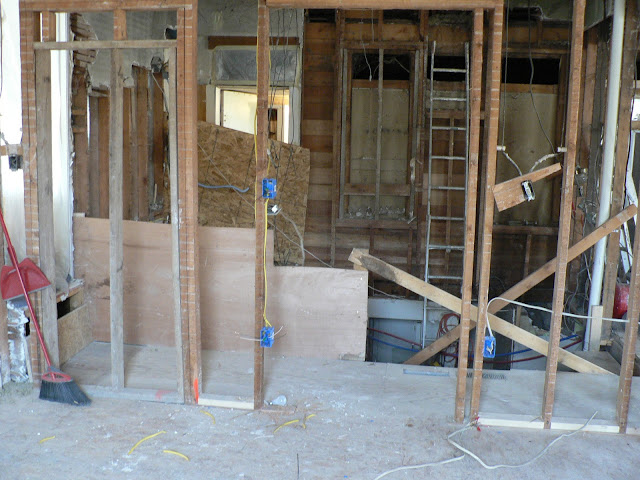 Inside the bedroom looking into the living room. 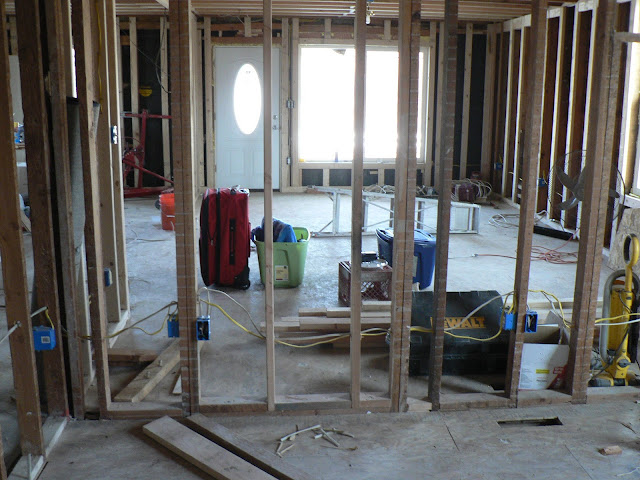 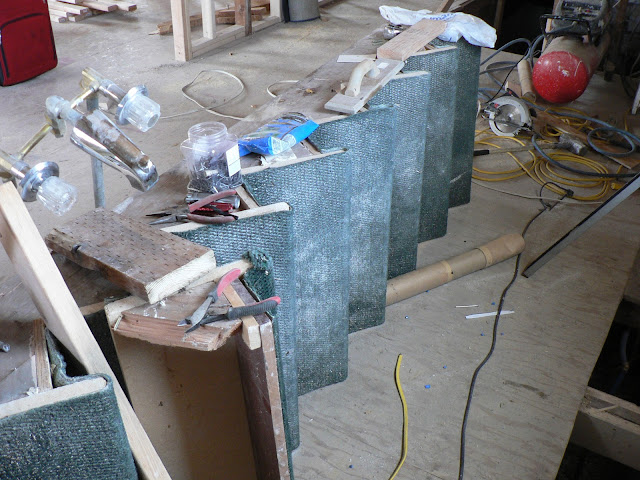 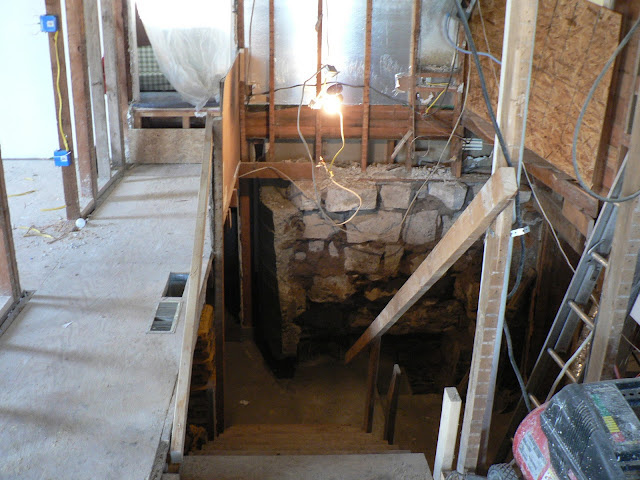 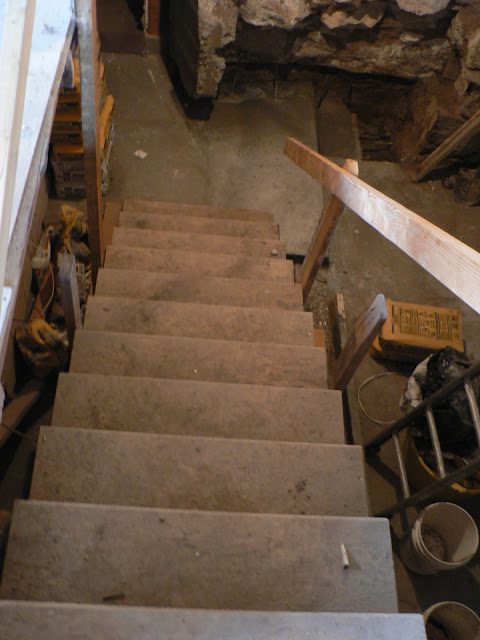 On the bright side, this opened up my creepy laundry space a lot!  It's no longer super creepy, just super dirty. 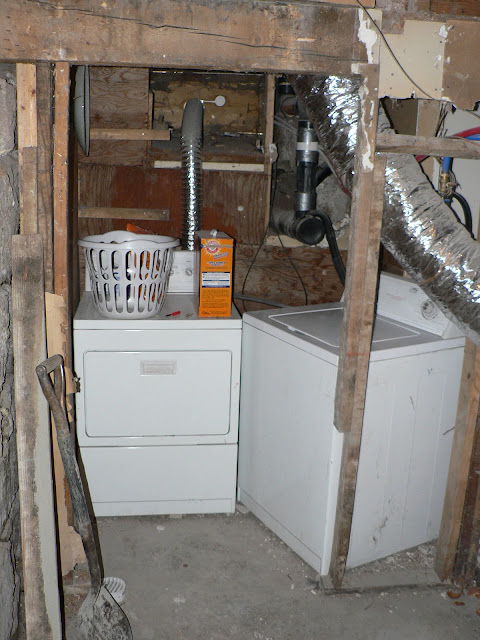 The stairs obviously aren't done yet... pretty sweet when you can look behind them!  The furnace and water heater are back there. 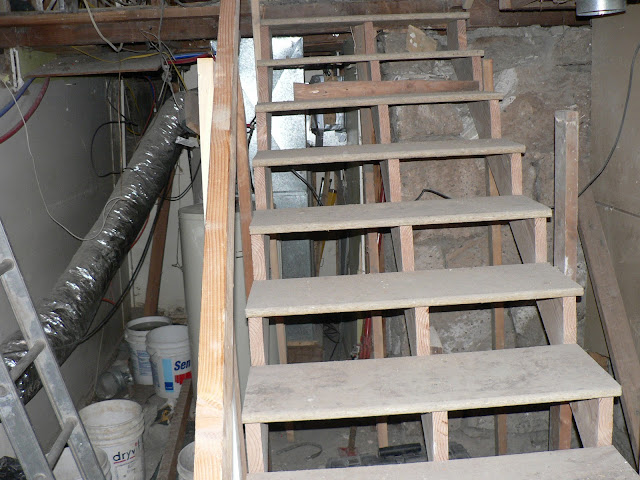 The kids rooms and big room where we live are an addition done sometime in the 1960s or 70s. The original house (built in 1925) has a gigantic four foot thick rock foundation that is held together with mud/dirt/clay. When the addition was added, they poured a new wall to the outside of the foundation and left the rocks. Thomas decided to remove the rocks and free up that extra four feet of space. We've been hauling rocks out of the basement and he's been pouring new footings (all from the inside of the house!). He has half of the wall out and half of the concrete poured.

Here's what it looks like:
You can see the rocks in the above pictures looking down the new stairs. 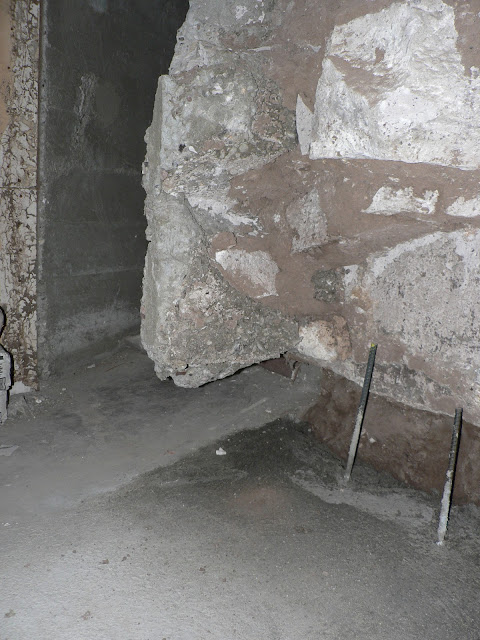 Thomas has been mixing all of the concrete by hand. We have bought 27 bags of Quikrete (a just-add-water type of concrete mix).  At 80 pounds per bag that is 2160 pounds of Quikrete, not to mention the weight of added water - carried down the stairs in buckets because our hose was frozen! Those bags don't look like much, but they are a beast!  I can hardly pick them up and get them down the stairs. It's some serious effort on my part and I'm not a small woman. 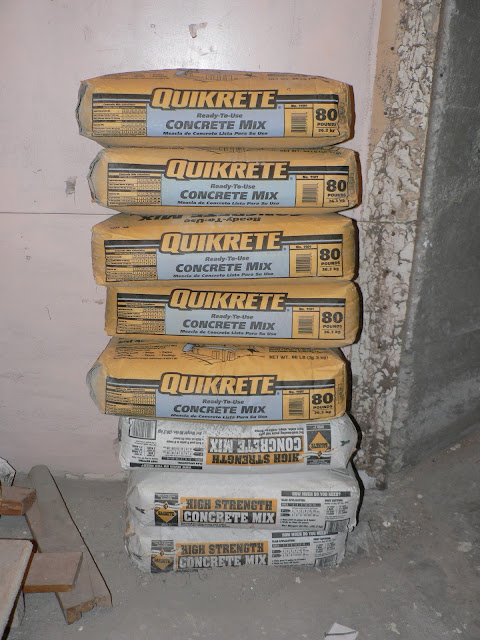 Right next to the wall is the entrance to the kids room! We put up another blanket here to keep out the dust. 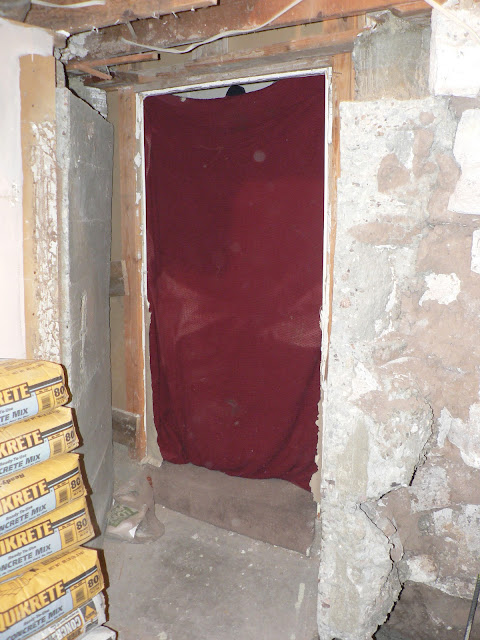 So by the end of the day there is a big, big hole where we previously had stairs and where the old bathroom was. Not a huge deal right? WRONG! You have to remember we never used the "under construction" part of the house. The kids never went over there, it was blocked off by plastic and my fridge. If this is confusing just consult the floor plans. After this demolition, the only way to access our bathroom, any type of water, a door to the outside, my stove and fridge, or the kids bedrooms is to go through this construction area.
If you look at the first picture in the post, you can see the green plaid of our couch. So now I have to shimmy behind my couch, under the plastic, and down that 2 foot drop and then shimmy behind my fridge just to go to the bathroom at night. The kids can't go to their rooms on their own either; too dangerous. I have to carry them back and forth when it's time to sleep or play in their rooms.
I was exhausted from carrying out rocks and debris all day, my house was a wreck because it had been all rearranged and neglected, and it was New Years Eve. After the kids were in bed I laid my head on my bed and lost it. I sobbed and sobbed for 10 full minutes. After my 10 minutes I cleaned my house and then sat on the couch and cried again. Things were already not ideal living conditions, but this was worse than ever.
Thomas felt bad, even though he shouldn't have. He knows me well and told me to go to bed (I'm totally a mess when I'm tired or hungry, just like my kids).  So New Years Eve 2011 I was in bed and he was up working on the house. He rang in 2012 all alone.
To be continued tomorrow... (UPDATE HERE)