This year has been really different for us, so I thought I'd bring you all along for the journey of growing a vegetable garden in Southern Utah.

Refresher: We just moved from our remodel to a rental in my husband's home town. In this tiny town we own a property that we bought in 2009 and call The Shanty. The Shanty has a house of sorts that is falling down and can be seen through, but it is also fenced acre of beautiful apple trees and pasture. We love it because it's ours. Here's a full post on The Shanty if you'd like to see the house a little more.

Any how, this is the first year we've lived anywhere near The Shanty so we thought we'd raise a garden on the property since we've been paying for it for years but don't live there. Great idea right?!

First off, the ground grows alfalfa and sweet peas and has had my sister-in-laws horses on the lot for the last 2 summers. It's tough old dirt that hasn't been worked in at least 15 years. So to conquer some of the alfalfa we brought in the big guns.

Man the soil is dry... it's a Southern Utah thing 🙂

We didn't plow and then till until the beginning of May, so the soil that we are working with is pretty poor. I'm currently growing more weeds than anything else. My dad reassures me that the first year after reclaiming a garden plot is the hardest because all of the grass wants to grow back, but next year will be lots better. I trust him but I'm not sure if I actually believe him.

After plowing and tilling we made furrows for the water to run down and planted along both sides of the little stream. We flood irrigate and so the water comes to a collection area at the top and then flows down each row. We are in a big drought here so we get to water every 4 days at the most. It sure seems like the ground dries out in between but I haven't lost anything! 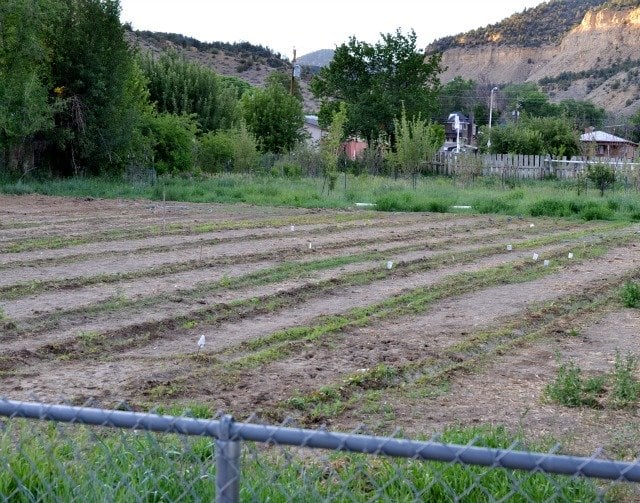 The garden is massive! We aren't using the land for anything else so why not grow something I can can/freeze and save for a winter's meal? I'm a bit of a seed hoarder and have been collecting seeds here and there for miscellaneous tiny past gardens. We didn't have much money to put into the garden this year so I just used up all of the seeds that I had stored and only bought a few like sweet corn and green beans that I really wanted (and are cheap!). 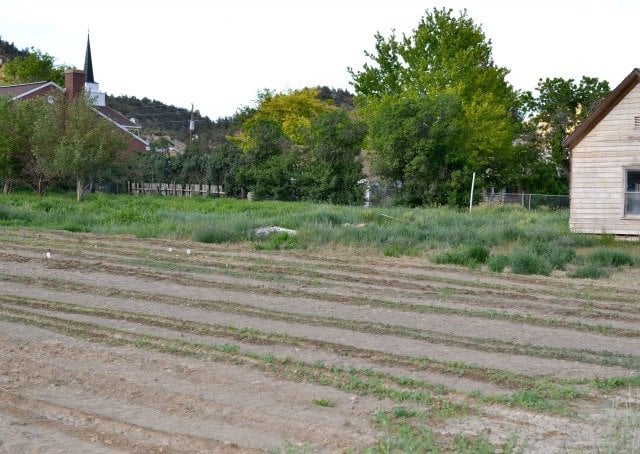 I've never really grown sweet corn before but I feel like it connects me so much with the Hoosier state that I grew up in. I just love it! Can you see all the dead grass in between the rows? It's a bit of a mess. 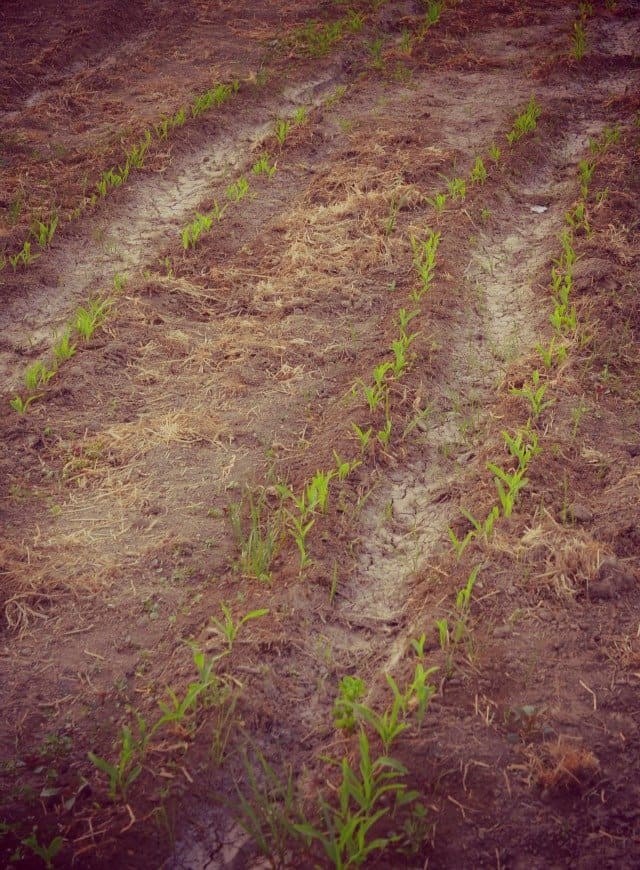 I also have a crazy garden obsession this year.

I have no idea why but I have it in my brain that I need a 500 pound pumpkin in my life; I've made it a goal to grow at least one that big. I went to the store to find special huge pumpkin seeds and paid $6 for 2 seed packets. I came home, dug 2 foot deep and 2 foot wide wholes in the ground and then layered the holes with soil, hay, and compost so that the pumpkins would have a lot of good stuff to grow in. When I opened the packets there were only 3 seeds in each. THREE. SEEDS! I paid a whopping dollar per seed which is just unheard of to me. I hand watered those little mounds every day in between our irrigation turns, morning and night, with tap water. And low and behold 5 or the 6 seeds have sprouted and are growing! 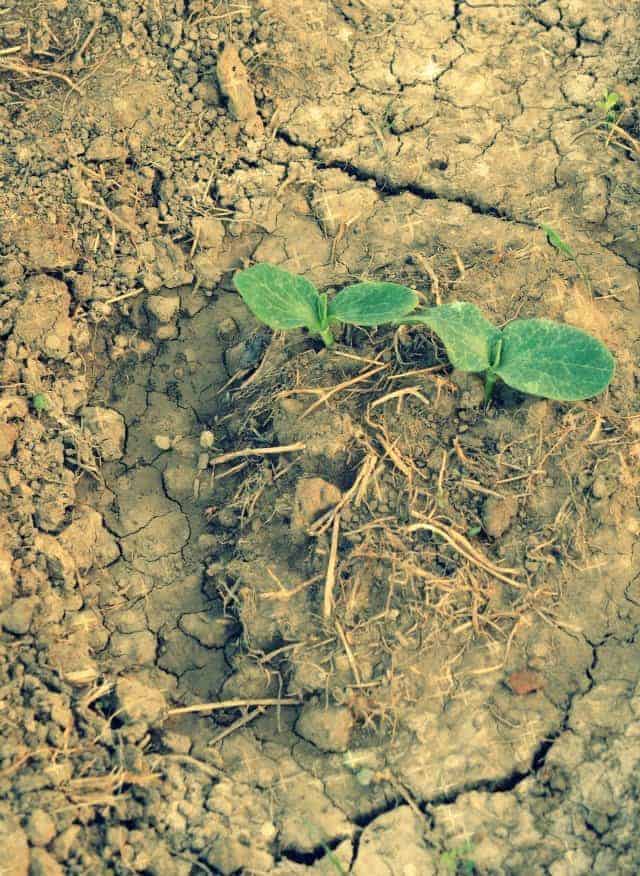 And lest you think everything is honky-dory in the gardening world, let me introduce you to my nemesis. No, it's not the weeds or the alfalfa that wants to live with my plants. It's the ants. Oh the ants. We have so many ants you can't believe it! They are every few feet, swarm and go insane when you disturb them in the slightest, and here's the kicker, they bite. Yes, we have a garden full of biting ants. I wore long pants, long socks, and tennis shoes today and it was 102 degrees at 10am. I didn't last long because it was so hot but I have no choice... oh the ants.

And they don't just live in little mounds. They have hugs sprawling nests. Here's one: 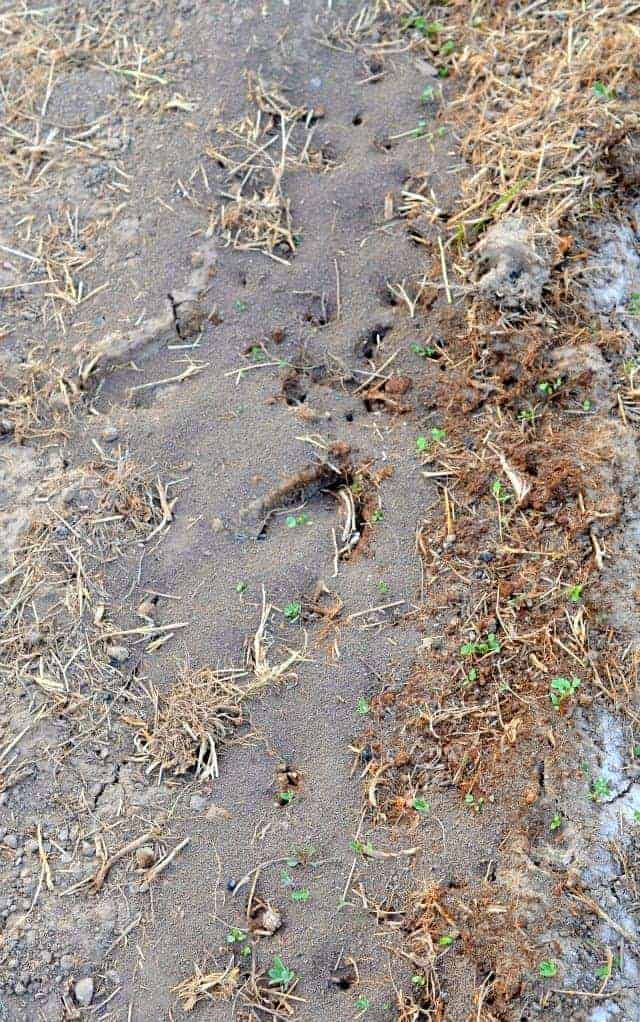 I know that the weeds, lack of water, and ants don't sound all that appealing but there's something so magical about growing a garden. I love the miracle of sprouting seeds popping through the ground, how much fun the kids have learning, naming, and pointing to plants, and you just can't get a garden tomato anywhere else than a garden.

This may sound funny to you but I consider myself a "hobby snob". I choose productive and work filled hobbies that give you something back in the long run and I'm proud of this fact about myself. Sure I could watch TV or spend more time on the computer, but gardening feeds my soul, my family, and my pantry. I love it!

So there you have it, a look at my garden this year that is totally time-consuming and so much fun to me. If I ever figure out a good way to do it I'm going to make you a map of the garden of what I planted and where. Be on the lookout for that!

Do any of your garden on a large or small-scale?!