The last time I showed you my garden it was so very young. I can't believe how quickly it all grows and produces. All that time and effort and weeding turns into food on our table and food in my pantry. The Law of the Harvest in every sense of the phrase is such a neat concept and one I'm glad to be learning about and teaching me kids.

Here's what the garden is looking like right now!

The hump of dirt you can see at the bottom was our potato tower. We used some 4 inch square wire to make a circle, filled it with straw, dirt, sand, and layers of seed potatoes and then we let it grow. We made our circle too big so I don't think a lot of water got to the middle and bottom of the tower. We also layered in our clay soil and it was too hard. I liked the idea though and it's a great space saver (not that we are short on space...), but it comes with a learning curve. I think next year we'll try it with just straw and sand and make the initial circle smaller. I didn't do a great job keeping it watered, so next year I'm putting it somewhere the orchard sprinklers will hit. All in all though I liked it and we got about 8 pounds of potatoes out of it. 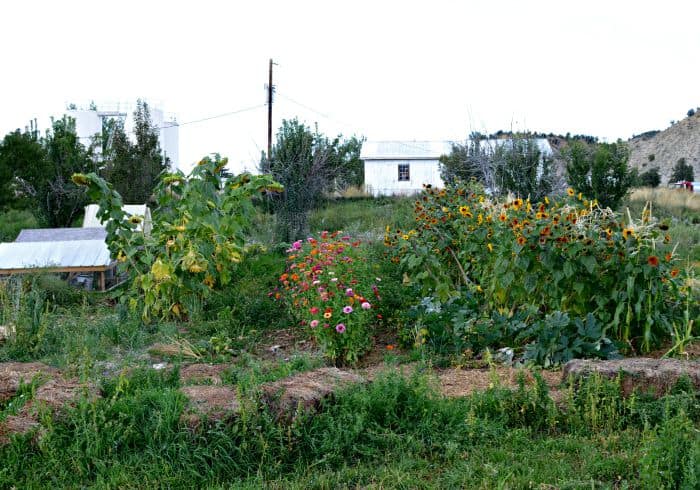 Here's all my viney things like melons, cucumbers, winter squash, and a bunch of different pumpkins and gourds, and of course, a few more flowers. 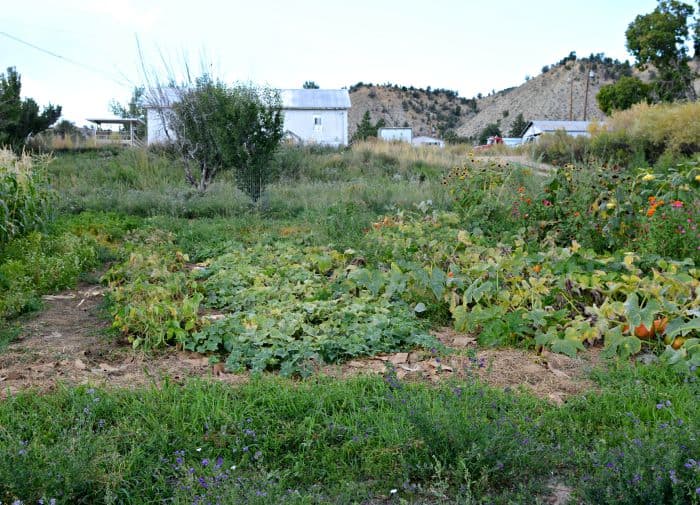 Last year my weeds were a mess and I just started mowing in my rows because they were awful. This year I tried a few different things like putting down straw, grass clippings, and cardboard and straw. The cardboard and straw worked the best and lasted the longest. I LOVED how well it worked. We put down two layers of cardboard and then a layer of straw on top. We had two kinds of hay/straw, one was oat straw and one was just cut meadow grass. The cut grass was my favorite. The oat straw still has some oat seeds in it and it actually would start to grow in the rows on top of the cardboard and it also invited a lot of mice to the area. I don't mind the mice but it was something to consider when our house is on the property. So the combination of 2 layers of cardboard and then a layer of grass hay had the best results. We weeded in the furrows where we water and plant but other than that it was pretty low maintenance.

I've been surprised at how quickly the cardboard (which we get for free from our hardware and grocery stores and the hay was old so it was also free!) breaks down. Here's a picture. 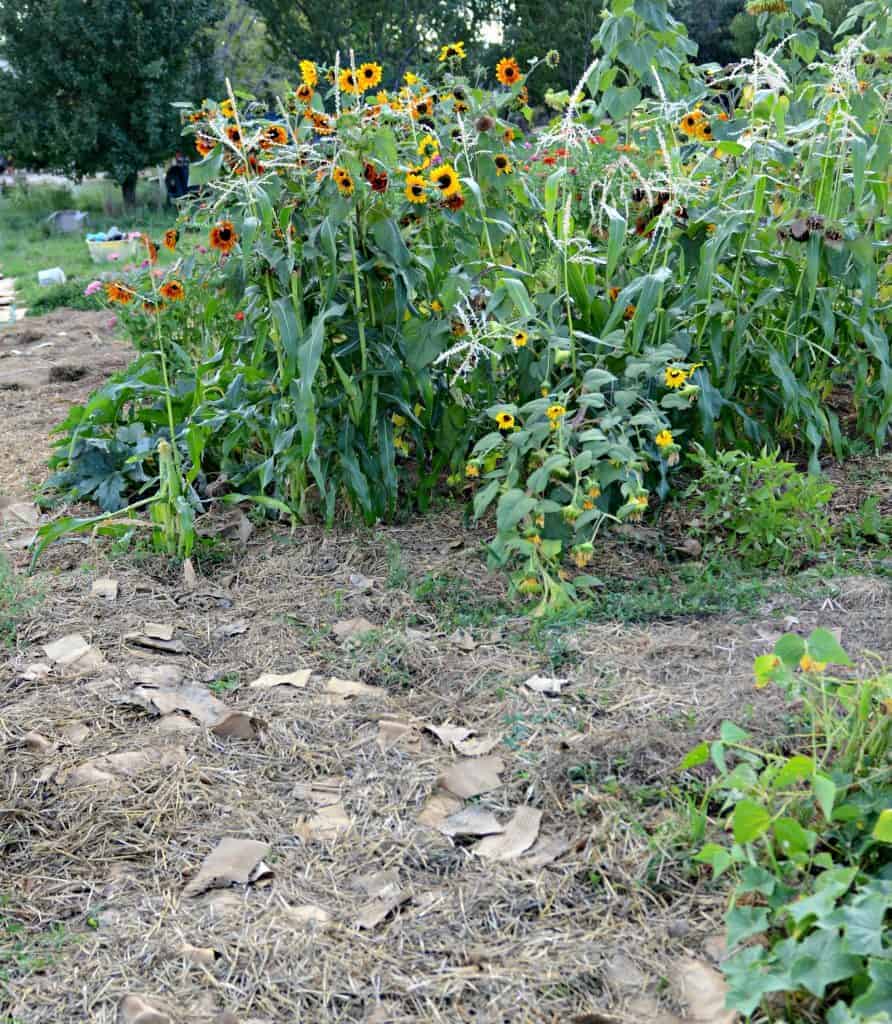 The cardboard is already breaking down and you can see it where the chickens have scratched around in it looking for bugs and seeds. I'm not sure if we'll till it in in the fall or in the spring but I doubt we'll be able to see any cardboard when it comes time to plan again next spring. All the extra organic matter is going to be great compost for our heavy soil.

Everything did pretty well this year except for the tomatoes. They didn't ripen well and when they did they had a lot of black spots on them, almost like a blight or dry mold. The green beans did awesome and I canned a ton with my mom while she was here helping with the baby. The one row of corn wasn't tons but it was enough to eat on and get 8 bags in the freezer. All in all it was a highly successful gardening year, especially considering I was super pregnant until the end of July and then had a new born. I'm so grateful we planted it! I didn't want to in the spring, but look what we have to show for our work! Here are some more pictures. 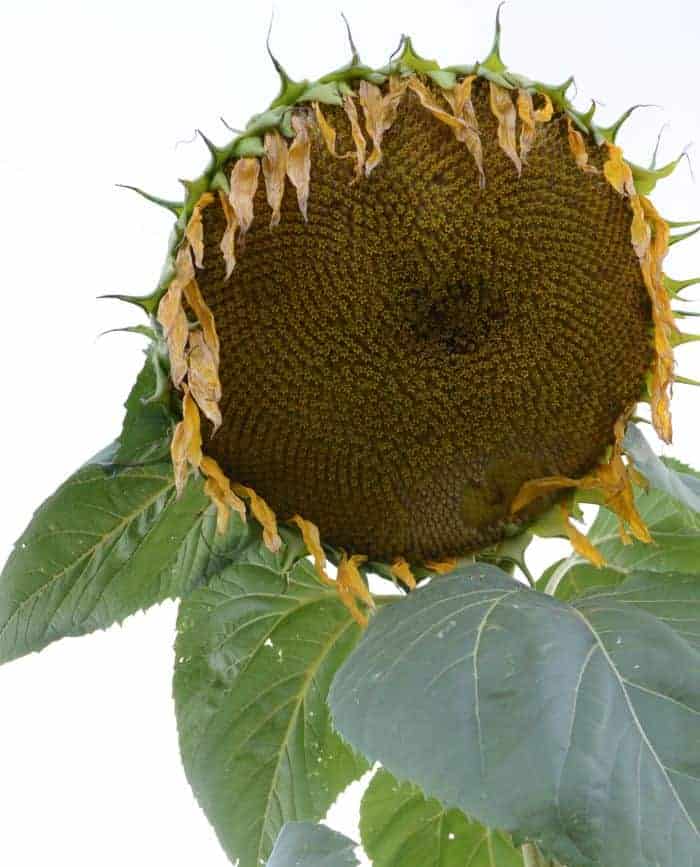 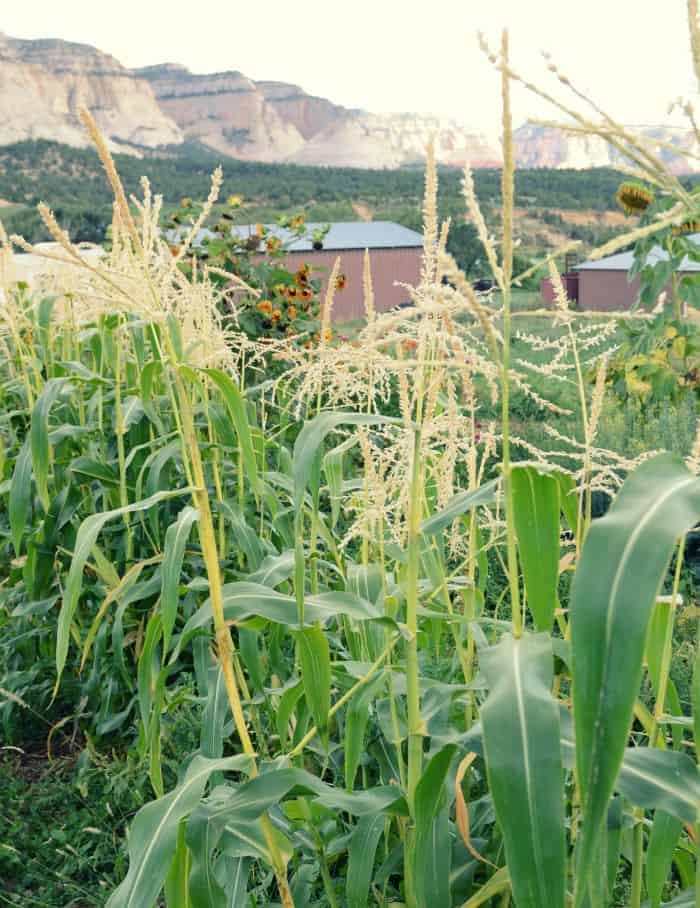 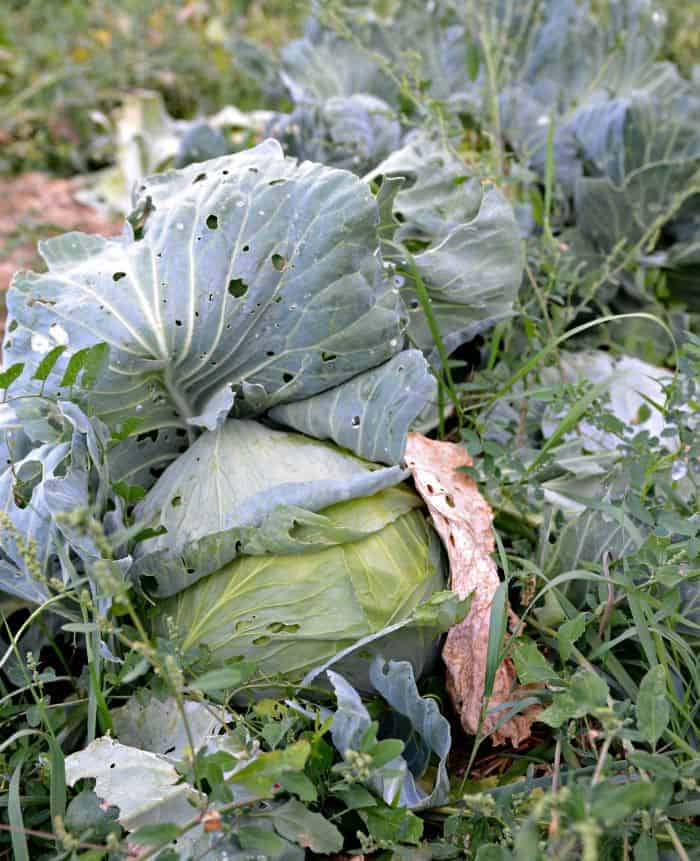 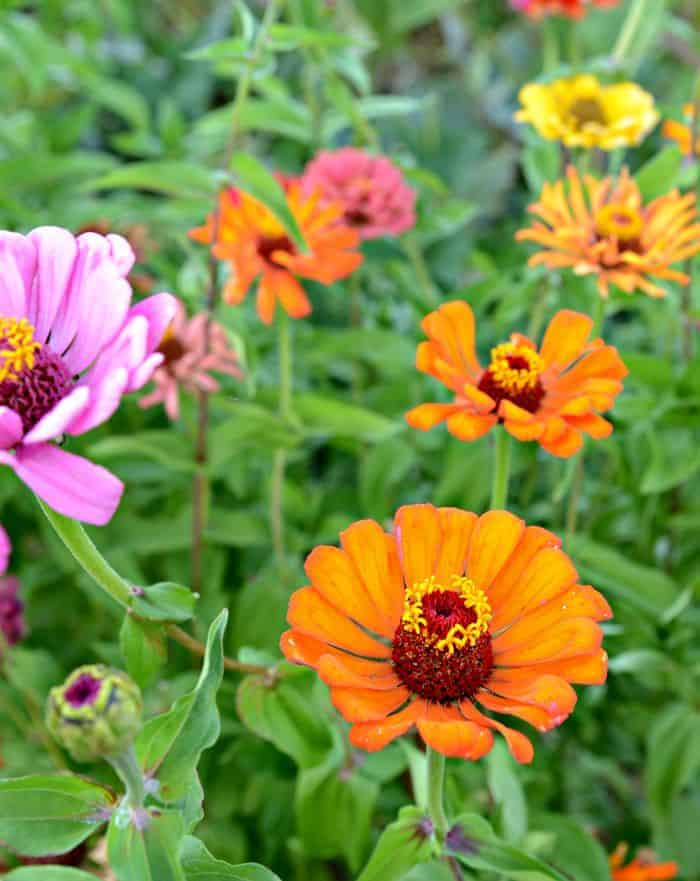 Isn't that fun! The kids LOVE coming to the garden and we spent lots and lots of evenings here. It's sad that school has started because now we need to put them in bed instead of being here.

Last but not least in the garden - PUMPKINS!!! I adore growing pumpkins. Heck, I might even turn the 6 acres of alfalfa into a pumpkin patch one day! 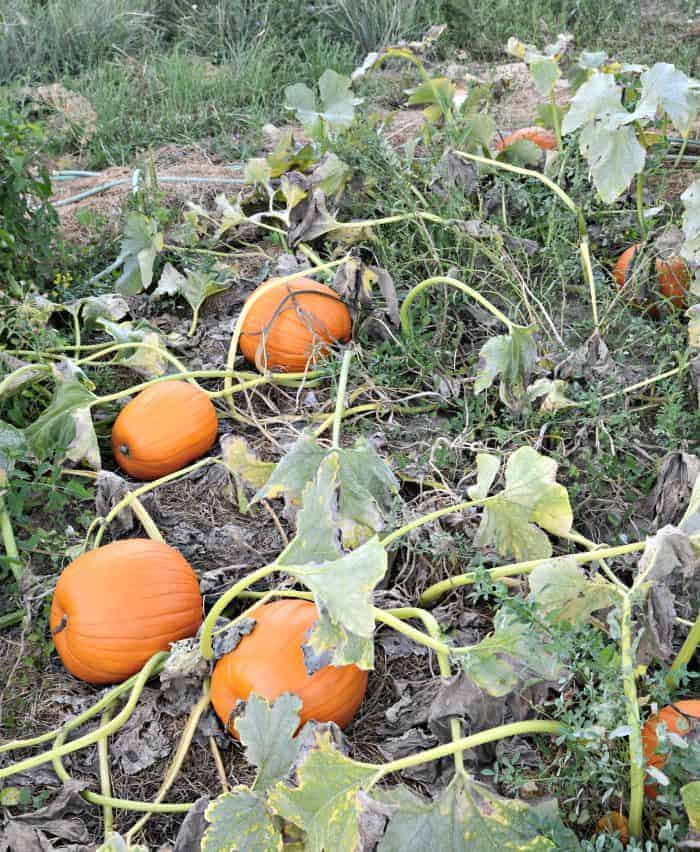 The chickens are doing well. I tried to hatch 2 different sets of eggs and then ended up buying another 4 chicks from the store. So after all that work I had 7 chicks this spring. Three were killed by a skunk. With only 4 left I was super sad/annoyed that 3 of the 4 were ROOSTERS!!! Haha, so when everything was said and done I ended up with one new laying hen despite my best efforts. I gave two roosters to a friend who processes them and kept one. We built a second run for the hens and just got a new coop that we haven't started using. So 4 of my old hens are in my old coop and run (to the left in the picture), and three hens are in the run with a cardboard box with shavings in it to nest in. I put this years chick and the two hens that are lowest in the pecking order together. These changes have been great. There's enough room for everyone and no one is pecking on anyone else right now. This set up with the new little coop for the three hens will work well for the winter.

The rooster just runs around the property. I don't really care if he gets eaten at night because I don't really want him, but if he's smart enough to survive and is kind he's welcome to stay. He just stays around the coops wishing he could get to his girlfriends and sleeps on top of the run. He very "manly" when we let them free range so there's no way I'd let him stay in with the hens. The coop and runs are "mobile" though ridiculously heavy and we move them all over the property, about once a week, so the hens have fresh greens under them.

The rooster, AKA Roostio, sure is pretty. 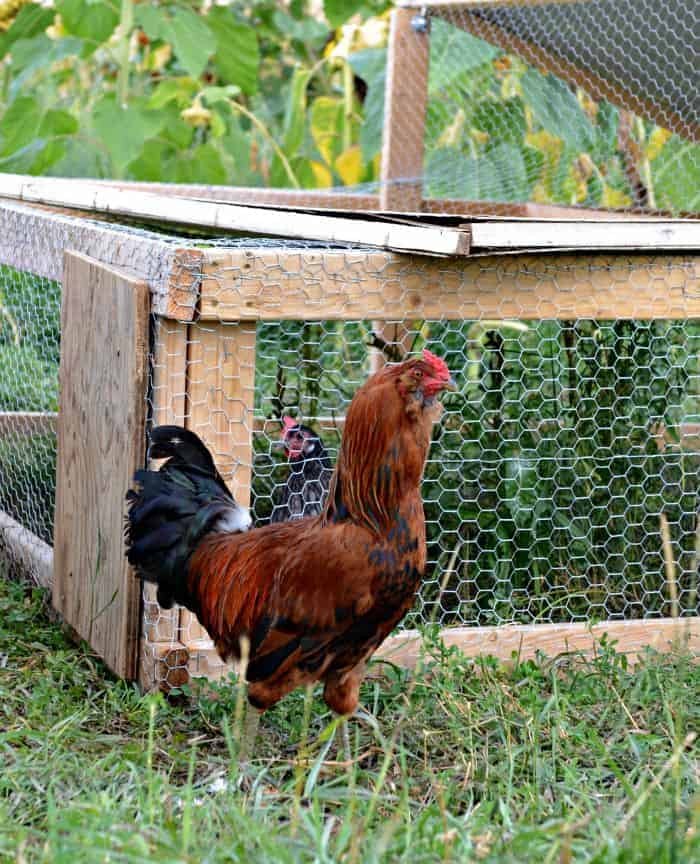 There's no progress on our house, but you'll have to tune in tomorrow because I'm revealing our kitchen plans! It's going to be awesome. The view is still gorgeous though. I'm so anxious to live here. 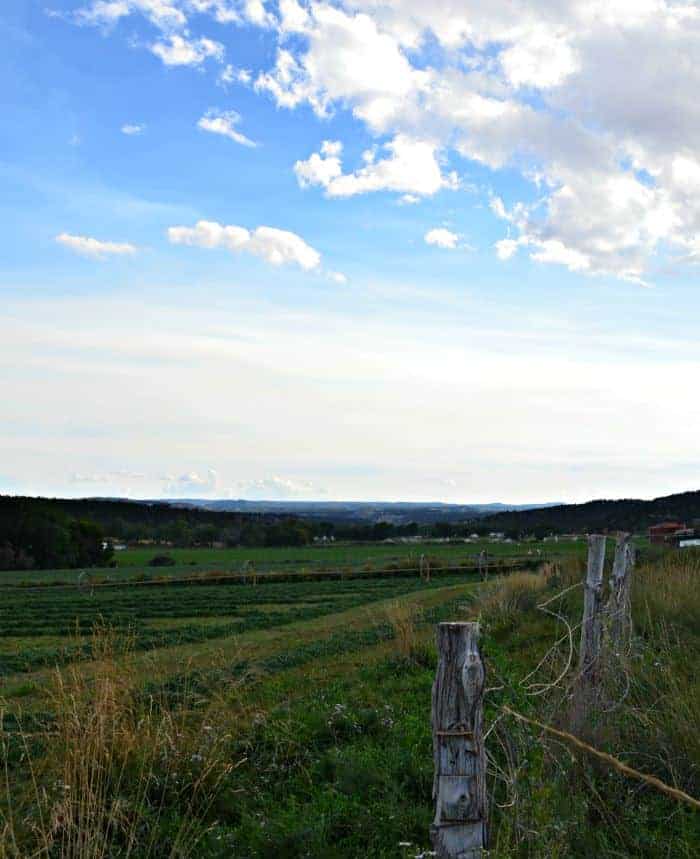 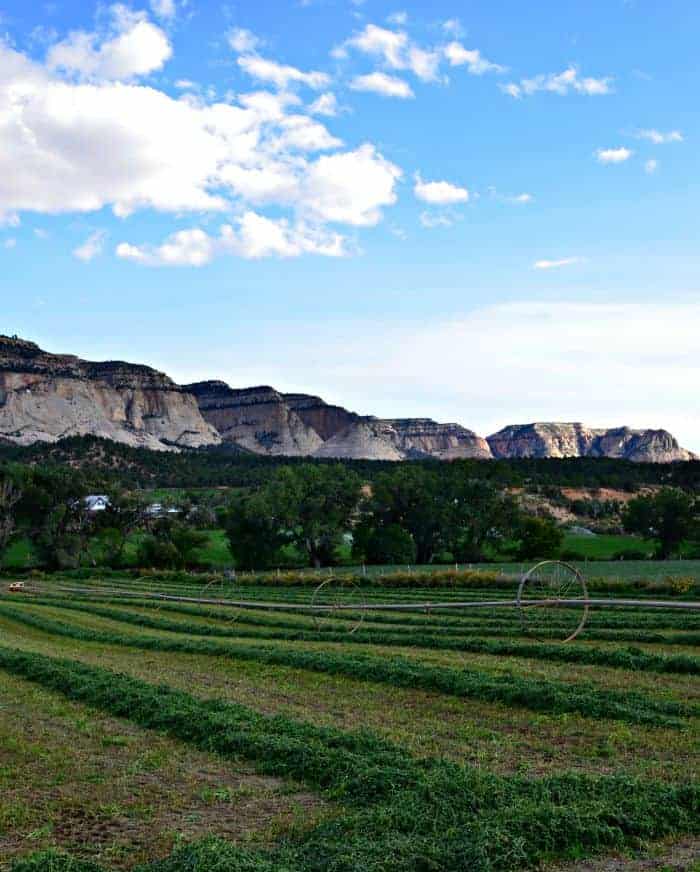 I've made Thomas promise to keep this dead tree around. It's not in the way and the wild birds love it. Isn't it cool!

So there you have a little tour and some thoughts on how a summer of gardening and backyard chickens has gone. Thanks for tagging along on our adventure!