I've mentioned a few times that I was incubating eggs from some of my hens, well folk, this weekend was their big début!

This was my second clutch of eggs to try to incubate. The first batch stopped growing when we had an all day power outage and I couldn't keep the incubator warm enough for the developing chicks. That little hiccup was something I had not even thought of happening and I was pretty disappointed. I decided I could try one more time though and I'm pretty pleased that I did. We had 3 of our 8 eggs hatch last Saturday! 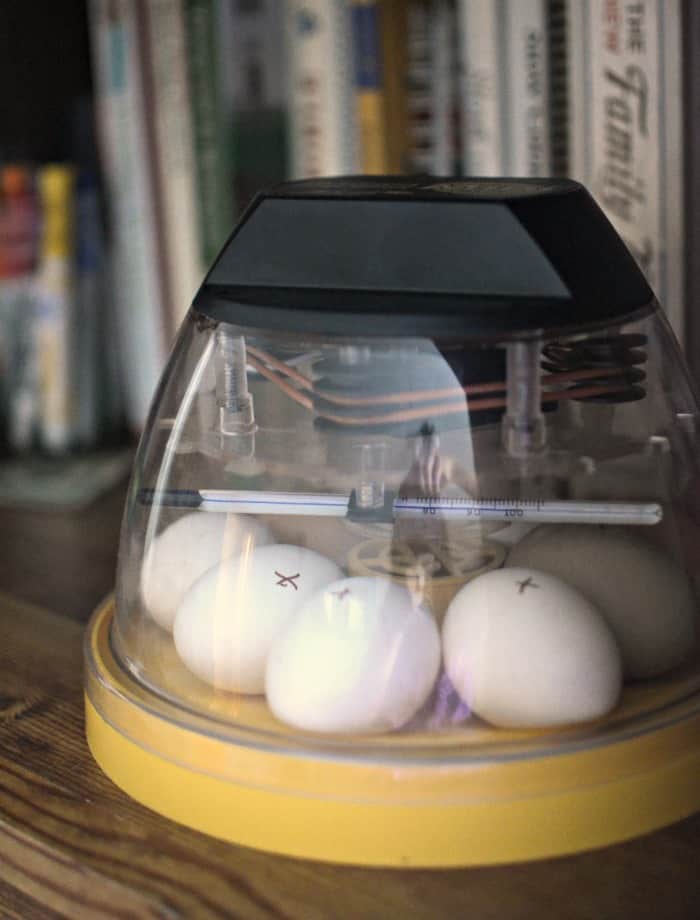 Incubating eggs isn't rocket science but it is a little bit of work and there is quite a bit more to it than just sticking fertile eggs in a warm spot. I'm shocked that chickens can hatch their own eggs because the environment has to be well guarded. Eggs have to stay between 99.3 and 99.9 degrees with a pretty high degree of humidity. I had to turn my eggs 5 times a day for the first week and 3 times a day after that so that the embryo doesn't stick to the egg wall. I hear that broody hens will do just that, carefully turn, rotate, and move their own eggs too. I learned a ton about chickens and hatching through this and it only strengthened my heart's belief that life is no accident. A miracle grew in that egg and it's because the Good Lord made it that way. He's such a skilled craftsman.

Saturday was day number twenty-one for incubation and that's the birthday! Friday night I saw a little crack on one of the eggs that wasn't there before and I got so excited. When we woke up Saturday morning not one but two chicks had hatched! They had been out a while because their down had already started to dry. That morning I noticed that same looking crack on another egg and we watched it all morning to see the chick come out. We went to the garden that afternoon to plant, remove bushes, use a big brush mower on the orchard for the first time in years (it looks fabulous!) and when we got home that night around 6 pm the third chick had hatched. I was a little bummed that didn't get to watch the big break out, but I hear it's less of a ta-da and more of a marathon. And by the way the chicks act that first day, I'm sure the later is true. They are so exhausted that they sleep most of the time and can hardly lift their heads. 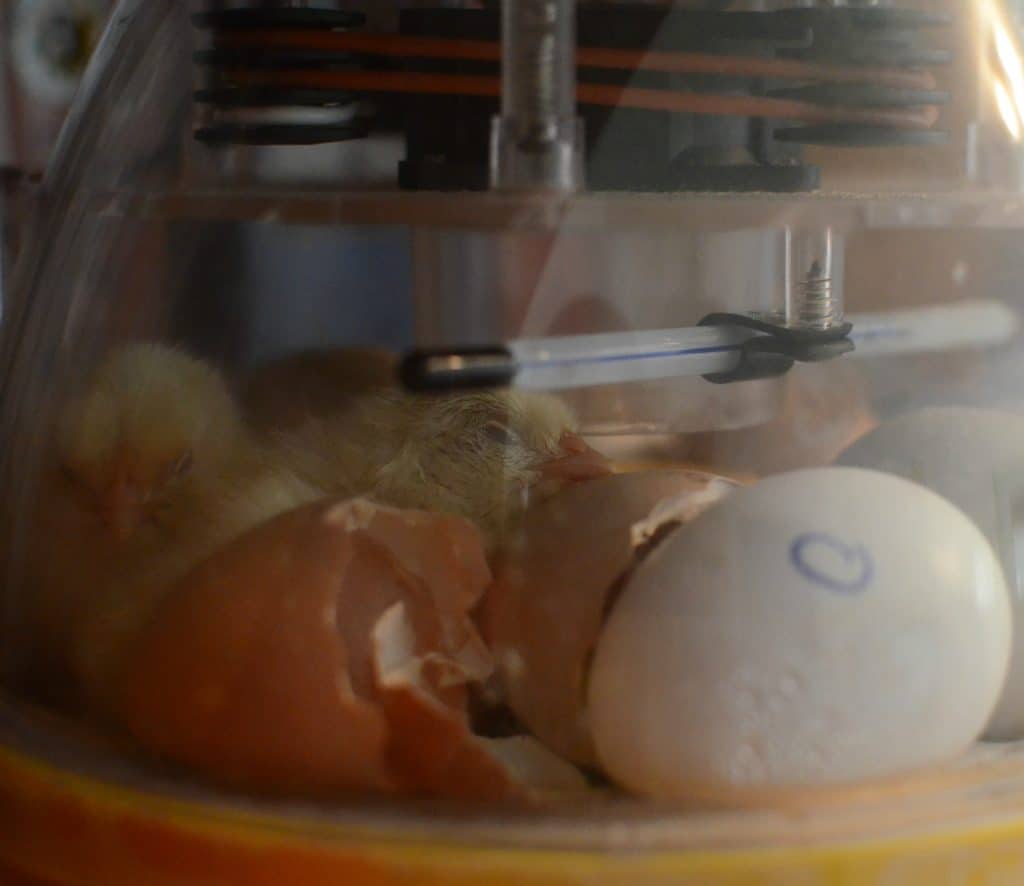 I was surprised to find no more signs of hatching late that night but got my brooder ready and moved all three chicks into their new box home. The kids had been so anxious to hold them, but I thought it wise to give them a little time to recuperate from hatching. We were really busy before church too so they kids finally got to meet and hold their new chicks Sunday afternoon. Love at first sight.

I waited until Tuesday to unplug my incubator and no other eggs hatched or ever showed signs of hatching. Most eggs that are incubated together will all hatch within 36 hours of each other, so at this point in the game I just assumed the chicks had either never developed or had died sometime during the 21 day incubation. Let me tell you, candling is an art and one that I have not learned. Every time I tried to candle the eggs to see if things were growing it looked the same and I honestly couldn't tell if anything was working or not. My light may have been too dim. That is a skill I'm going to have to get a hands on lesson about because I had no idea what I was looking for.

The chicks are doing so well. We brought home four more chicks from the hardware store. I'm super curious as to how many are males and how many are females, but for now, there's no telling who is what.

This is one of the chicks that we hatched. Two of them look identical except that one has a little black dot on the top of its head and the other has two little dots on its back. They are sweet and kind and were the two born Friday night. One came from a brown egg and one came from a white egg so time well tell what they mature to! Their papa Roo was a White Leghorn and the moms could have been anything from White Leghorns, Barred Rocks, and Rhode Island Reds. I'm not sure what cross-breeds I ended up with! 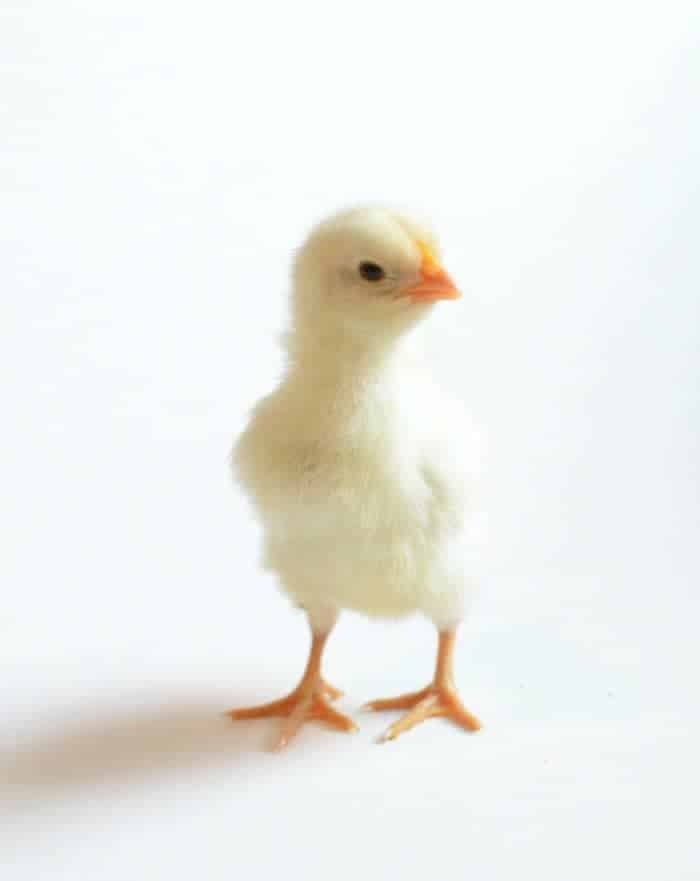 I would be shocked if this one wasn't a rooster. It hatched Saturday afternoon and is already much bigger than the two others and even has little feathers coming in on his wings. He's a bit crotchety and bit aggressive towards the other chickens. I call it Grumpy. 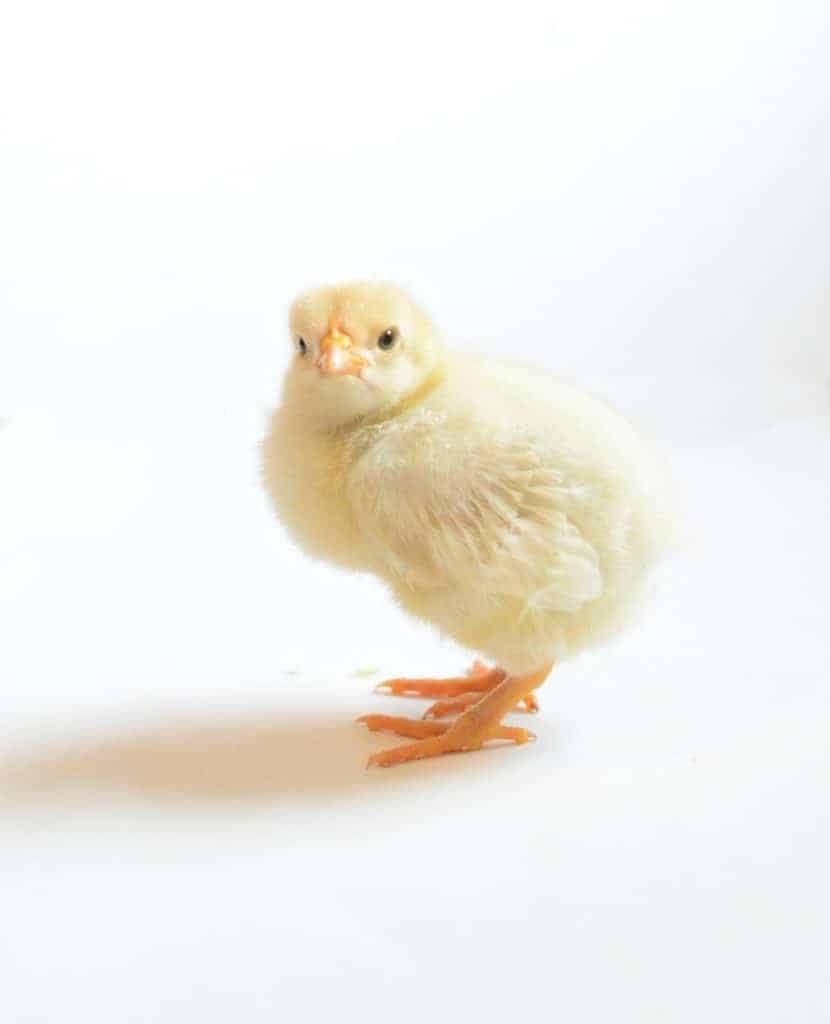 This is one of the two we bought from the hardware store. I'm not sure what they are but I thought we were picking out Auricanuna or Ameraucana chicks; it was hard to tell - both varieties lay blue/green eggs. Aren't they pretty? 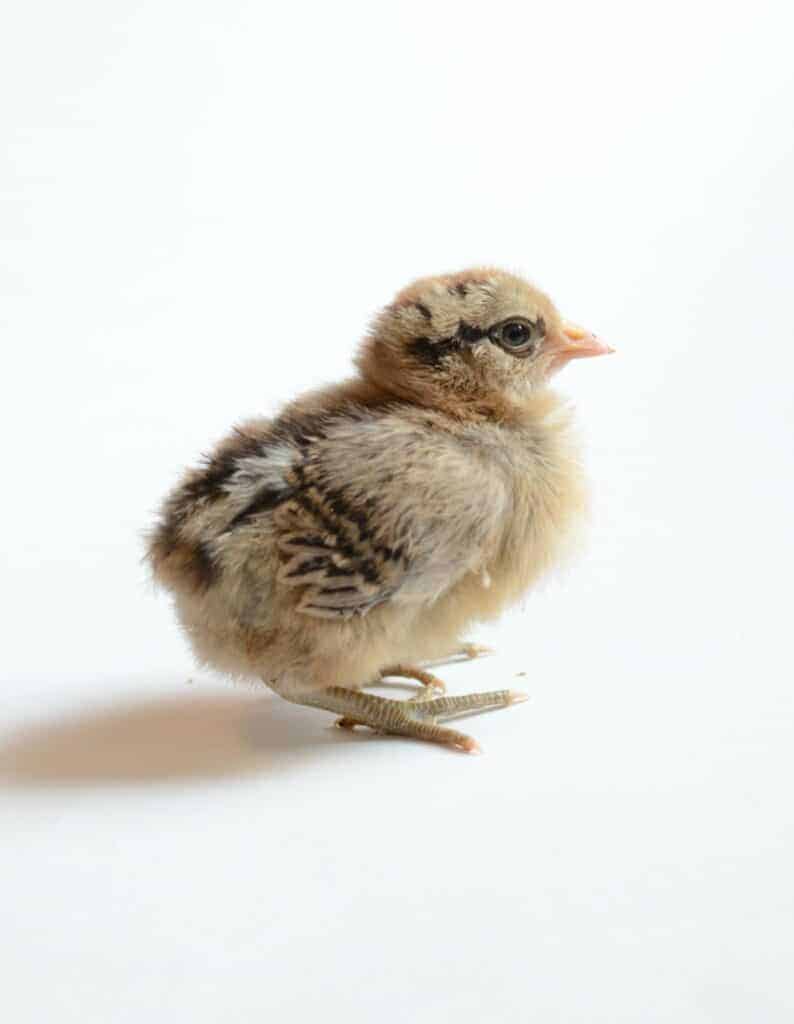 And in full "pet" mentality, my kids LOVE THEM!!! They like to play with them as much as their mom allows. I watch them pretty carefully but chicks that are handled a lot when they are little make for the nicest chickens. 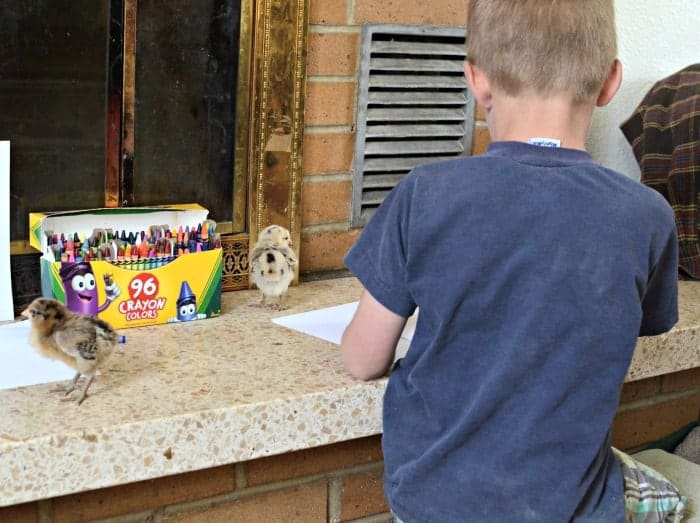 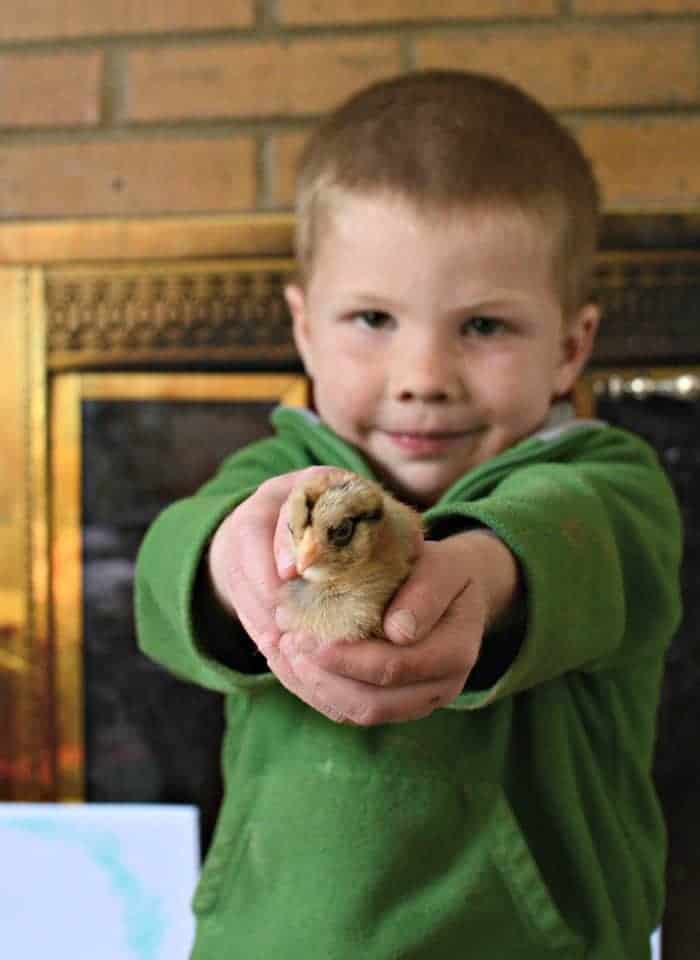 We ended up with two tiny black chicks from the hardware store just yesterday, but I didn't get their pictures taken yet. Here's a little peek at them this morning. They are SO vocal! One couldn't find its way back to the heating unit and was crying (yes, they have a distressed loud cry!) at 3 am and I had to go stick it back under the heat. They are really loud, tiny, and adorable. 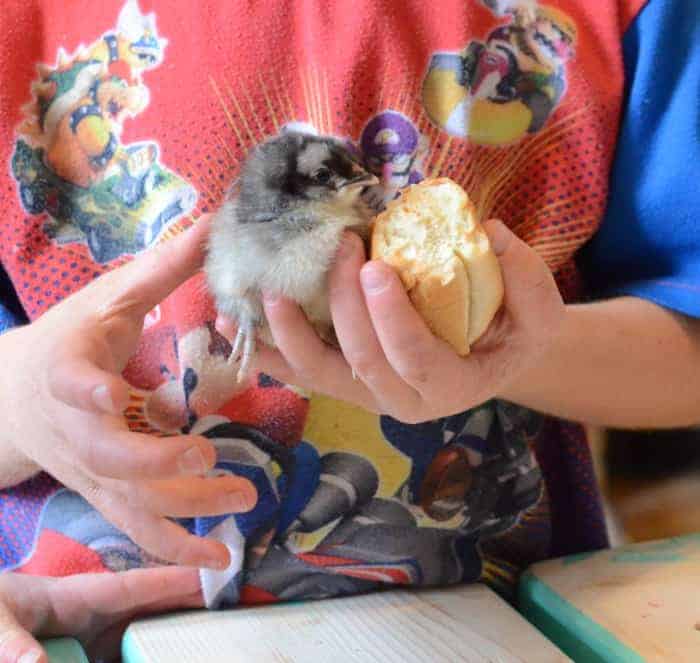 to hatch my eggs. I liked it because it was clear and we could see what was going on. I didn't realize before I bought it that the eggs needed to be rotated so regularly. They have an incubator that looks just like this one (it's the "Advanced" one) for another $70 that rotates them automatically. I think I'd pay the extra and get it.

after it was recommended by Cassie at Wholefully. I have used a traditional heat lamp other times I have had chicks and didn't even know that something like this existed. It is awesome!!! Instead of a big old light bulb that is on constantly (all night long mind you) this is just a little thing that heats up on the underside and they go under it to warm up. It uses gobs less electricity and it takes out all of the heat lamp fears. I worry that my heat lamp could catch on fire when we aren't home, I worried that my kids would bump it when getting a chick out and get burned, and I just worried about it in general. This brooder is a fabulous option I'm so glad that I bought. I'll keep the heat lamp for if I ever need extra heat outside in the coop, but for these tiny little chicks who need constant heat it is a great option. I think it's really natural for chickens to want to hide a bit (this is the perfect place) and it also isn't a light so at night they go to bed! That seems much more normal than having a light on constantly. I noticed right away that they got into a much more natural schedule with this compared to the heat lamp I was using the first few days.

And if you are thinking about hatching, having a hen go broody, or just raising your own chicks I highly recommend the book Hatching & Brooding Your Own Chicks: Chickens, Turkeys, Ducks, Geese, Guinea Fowl

. It was awesome! It is super detailed, has a million neat pictures, problem shoots just about everything, and was so informational and enjoyable just to look at. My kids even liked it. It shows chicks at ever day of incubation too which was a really neat thing to see. I'm really glad I bought this book. It's a must have for any hobby farm library.

If you don't have fertile eggs of your own you can order them online from hatcheries or talk to a local farmer. Incubating your own eggs might not have crossed your mind but I think it was wonderful. This would be a really fun thing to watch in the classroom setting too, with your own kids or grandkids, or just to do for you. There's a real miracle in watching the life cycle and I'm so glad I gave our family the chance to have a bird's eye view of it.

Do tell, would you ever consider hatching your own eggs?!