Bless This Mess > Life on the Farm > Our Family > Healthy Living > Farm and Garden Update: June

I figured it was high time to get a little garden update going for you!

The garden is growing like a weed, weeds included!

Here’s what I planted this year:
Red onions
White onions
Potatoes
Radishes
Carrots
Peas
Swiss chard
Spinach
LOTS of green beans (they are the only things that I feel like I have to get in bottles this year, I’m hoping they’ll be ready right when my mom gets here to help with the baby. Convenient!)
Corn
Tomatoes
Assorted Bell peppers
Jalapenos
Green Cabbage
Eggplant
Cucumbers
Watermelon (2 varieties)
Cantaloupe
Butternut Squash
A million kids of pumpkins and ornamental gourds
Lots of sunflowers
Zinnias

Here she is in all of her wild glory! This picture is from Friday and some of the other pictures are about a month old. I can’t believe how much has changed so quickly! 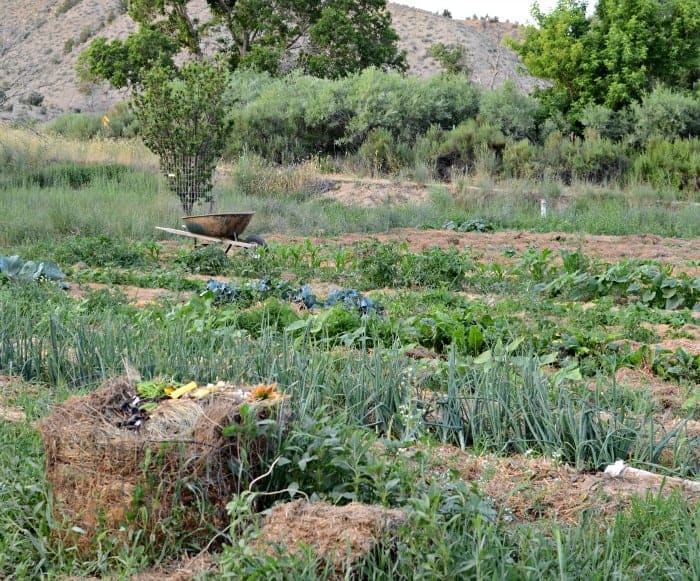 So far we’ve been eating the chard and spinach (mostly just in my morning smoothie) as well as a handful of peas, but those don’t even make it out of the garden let alone home before they are gone. The onions seem to be all tops and no bulb and my radishes went straight to seed already without ever forming a radish on the bottom (they did that last year too, I think it’s just too hot for them here). The corn is about 6 inches high and I can’t help but think I’ll have a baby here before I pick my first ears. I’m so excited for both.

Here in the desert we irrigate (because it doesn’t rain much) and that means I’m in charge of making the water go where I want it to go. We choose to make furrows or little rows of water that flow down the garden. We walk on the paths that are taller than the water. Sometimes this seems a little opposite of what other people do. I’ve seen lots of people make raised garden paths and then walk in the shallow part, that’s not how we roll.

Last year we had a really long garden and I didn’t make my furrows long enough. I had water running all over my rows and rarely getting to the end where the plants were. Water in the rows meant that I grew all kinds of weeds. I got to the point last year that I just used a lawn mower to get clear my rows. It wasn’t pretty but it still produced a lot. 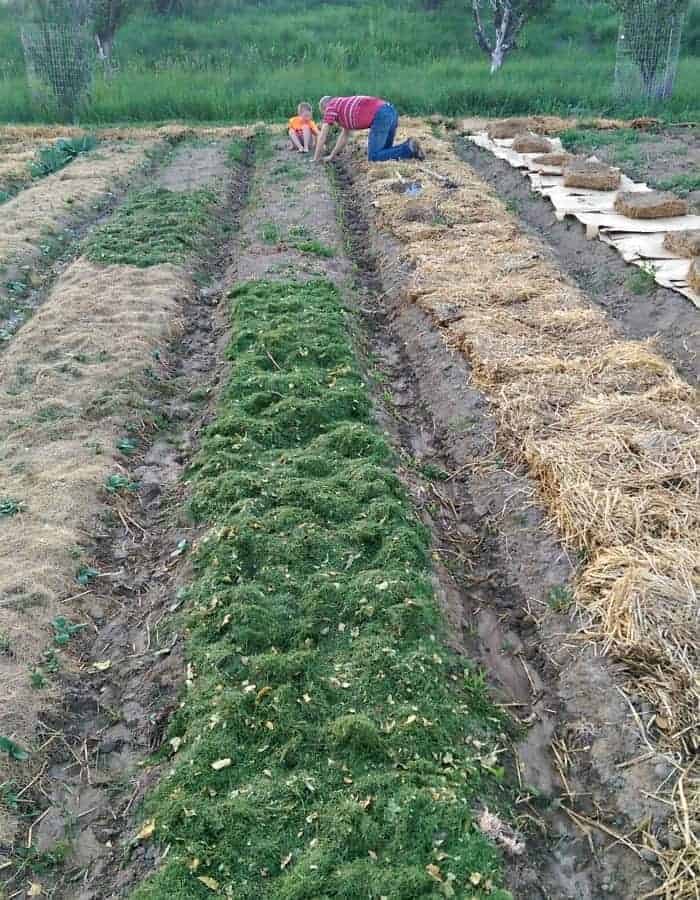 This year though Thomas helped make my furrows really deep. I also lined my walk ways with cardboard and then assorted things like oat straw, grass hay, and lawn clippings. I’m hoping this mulching method will be a great supplement to the clay soil as well as helping to keep the weeds down. So far I just love it and it looks nice and organized. We plan on just tilling it all in in the fall and letting it compost with the rest of the plant debris over the winter.

Speaking of compost, after years of wanting to, I’ve finally started a compost pile. I’m not sure what I’m doing and I’m pretty sure a family of mice has moved into the bottom of my pile but man does it feel good to have it started. I put in kitchen scraps that the chickens don’t eat well like potato skins (which are bad for chickens), broccoli stalks, citrus rinds, and the like. So between the compost and the chickens I have just about zero food waste. Don’t get me wrong, we waste plenty of food (can I get an amen from my fellow moms of little kids!), but at least the food isn’t going right in the trash. 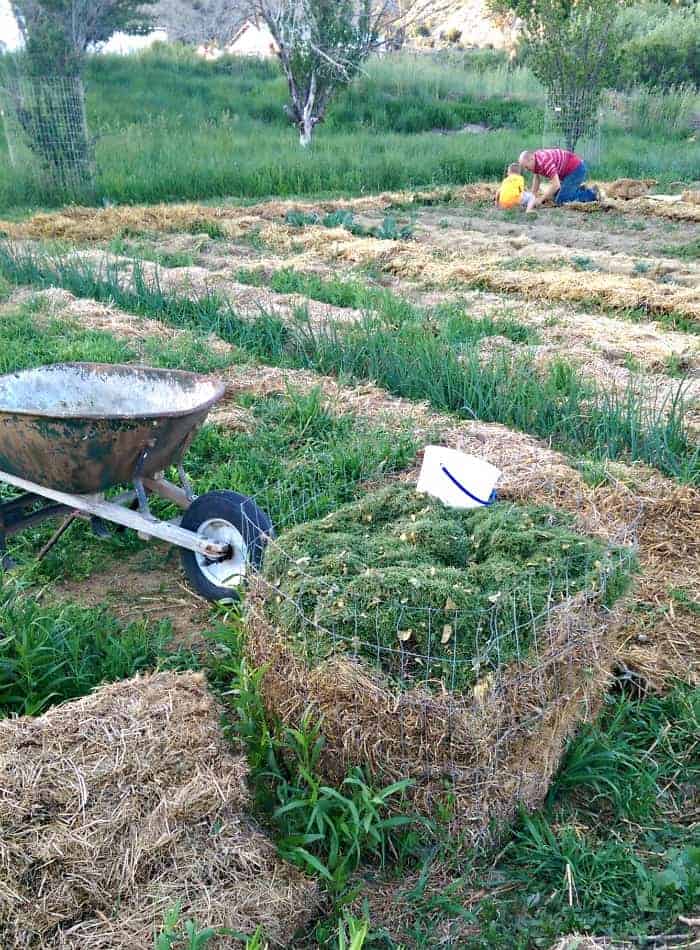 I’m also trying a potato tower this year. There seems to be two kinds of potato towers in the world – on you fill up the from the beginning and just let it grow and the second you continually add to. Mine is the first. We layered all kinds of peat moss, soil, hay, and the like and had the seed potatoes planted about every 10 inches along the very edge of the wire container. The potatoes are now growing their plants out the sides and I hope the middle will be full of tators in the fall. I added some radishes and carrots to the top for good measure. 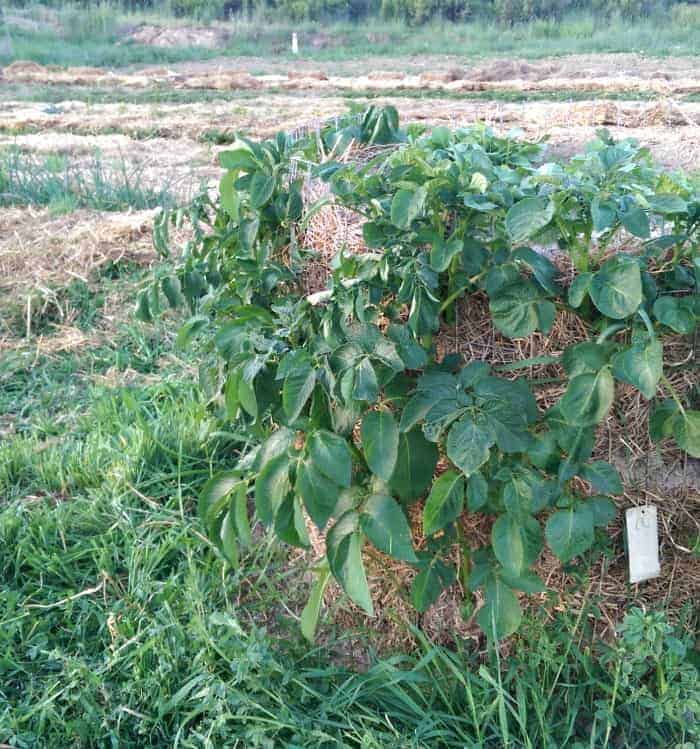 The chickens are great, the chicks are well… few in number.

I have 6 big chickens living at the garden and they are doing well. We try to move them at least once a week so that they stay on fresh grass but we don’t let them free range as much as I would like. They’ll get to more once we live there, but for now it’s safer for them to only come out on the evenings we are working in the garden and Sunday afternoons we hang out at my mother-in-laws (right next door). They are picking on each other a bit though so we are making another run for one or two of them to go in with the little chicks. That should give everyone a little more room and hopefully they won’t get bored and pick at each other’s feathers.

The chicks have been living in my backyard for quite a while. I lost 3 of my chicks in the space of a week to what I assume is a skunk. It was the smartest skunk ever and even found them inside the shed once I started moving them in at night. It dug holes, scaled fences, and made me so sad. Of course 2 of the 3 birds killed were ones that I hatched and not just the store-bought chicks. And here’s the kicker. The only chick it left from my hatching is a rooster. LOL. I don’t really want him…. we heard his first awful puberty crow yesterday and just laughed. I’ve got to get it on video. It’s just as awful as you can imagine. 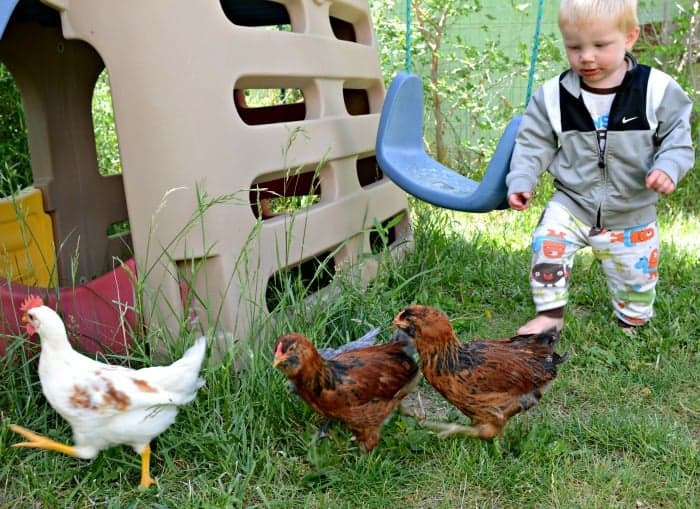 We call the white one (the rooster) Roostio, the red ones are “The Twins”, and then the other is “the little one”. The little gray one is my favorite. She’s very smart. It’s fun to see their different personalities. I’m excited to take them over to the garden because herding them back to the shed every night for bed is getting harder and harder the bigger they get and the bigger my belly gets. I can only imagine how funny it would be to watch my large pregnant self out there with a stick trying to herd chickens.

There you have it! An update of some of my favorite hobbies. Gardening is so good for my soul and it’s so fun to watch my kids learn to love the process too. Henry, my five-year-old, and I share the most enthusiasm for it. He LOVES to go to the garden, he’s amazing at sitting and picking weeds with me, and he’s often the one who does the little bit of harvesting. It’s so fun to see something as lovely as connecting with animals, the soil, and food growing inside your little people. After all, they are why I do it.

Good for you for keeping up with the garden while pregnant! That is challenging but that fresh produce tastes so good. We live in Arizona and we grow radishes in the winter…maybe you could try planting them earlier?

Well, you COULD be herding cats! lol I can just see it now… The two of you, that is you and your 8-9 month sized belly walk out and yell “Okay kitties time to come in”, and they are laying down 10 feet out. You walk out and they move 5 feet further. You walk around them, and they walk around you and lay down 5 feet further out…. and so on and so on…. Pretty soon you are out for a walk whether you wanted one or not! Kitties and herding do not go well together…