Man, weekends in the fall seems to be jam packed with greatness don't they? I know I'm not the only one enjoying the weather, being outside, baking up a storm, picking and preserving the fruits of the season, and just enjoying life. This recipe is the perfect little treat for for me to share with you on this lovely first day of October.
I've been following Carrie over at Bakeaholic Mama for a while now. I actually won a King Arthur Flour giveaway that she did earlier in the year! She's always rolling out crazy-good recipes. I noticed last month that she was part of a group of chocolate-loving bloggers who collaborate one day of the month to bust out their best chocolate recipes. I asked her if I could join up with the group and she let me. Score! Thanks Carrie.
So this month the theme for the recipe challenge was chocolate and pumpkin. I put a little shout out on my Facebook page to get some ideas of great chocolate and pumpkin combos. You guys are so smart; it was hard to decide what to make. We'll, here's what I came up with: No Bake Pumpkin Pie Pudding with a Gingersnap Crust and White Chocolate Whipped Cream. That title is a mouthful, and so is this dessert. I know you'll love it! 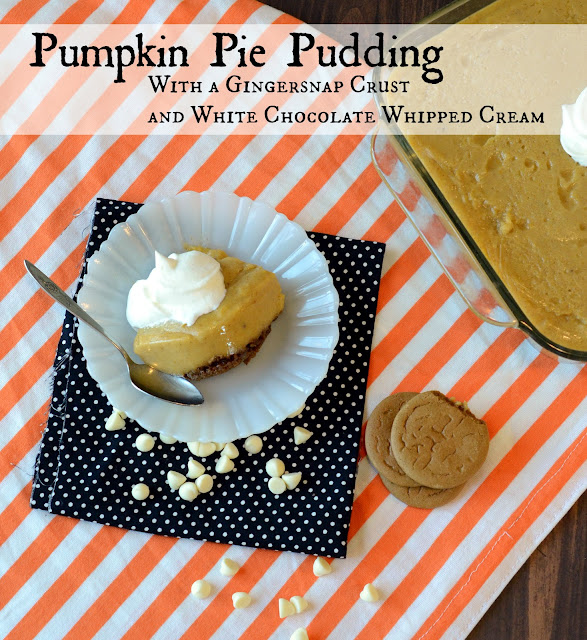 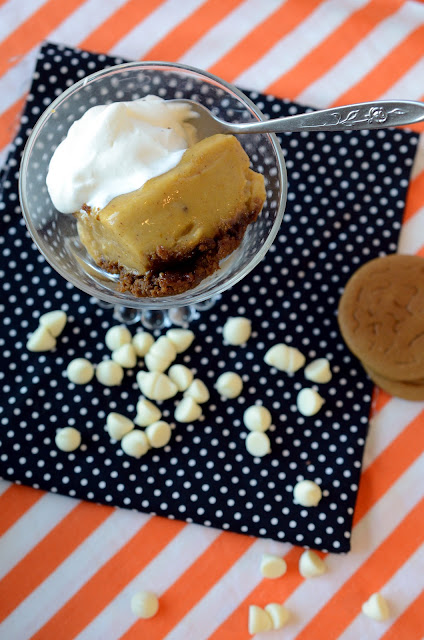 For the whipped cream:

1 ⅓ cup heavy cream
½ cup white chocolate chipsTo make the crust, combine the cookie crumbs, sugar, and melted butter in a small bowl and stir to combine. Spread the mixture evenly on the bottom of an 8x8 inch square baking dish. Use the bottom of a measuring cup to press the crust down flat.
To make the pudding, combine the sugar and cornstarch in a large saucepan. Place pan over medium heat. Gradually whisk in the milk and egg and combine well. Stirring constantly, bring to a boil, cook 1 minute, and then remove from heat.Combine pumpkin, vanilla, spices, and salt in a separate bowl and gradually add to the milk mixture while whisking constantly. Place the pudding over low heat and cook for 3 minutes until thoroughly heated, but do not let boil. Pour the hot pudding over the crust and smooth the top with a spoon, cover with plastic wrap and refrigerate until chilled. Make sure the plastic wrap is touching the top of the pudding so that a skin doesn't form. Let the pudding chill completely, which will take 3 to 5 hours.
To make the whipped cream, heat the cream over medium-high heat in a small sauce pan until boiling. Remove from the heat and add the chocolate chips. Let the hot mixture sit for 30 seconds and then whisk to combine. Allow the mixture to chill completely (while the pudding is chilling) in the fridge. When you are ready to serve, beat the white chocolate and cream mixture with the whisk attachment of your electric or stand mixer. Beat at a high speed until soft peaks form.
Serve the whipped cream on top of the pudding mixture right away.
Notes:
The crust doesn't stick together very well when you first make it. It will firm up and stick together after it absorbs some of the moisture from the pudding and has time to chill.
I used Guittard white chocolate chips and would recommend them.
The dessert doesn't cut into perfect squares, but it's not a thin pudding-mush either, so serving it in a bowl or on a plate are both appropriate in my mind. It's your pick.
The cookies that I used were pretty strong in the ginger-flavor department. I would have liked the crust better using the ginger-thins from Ikea. Their flavor is more mild, which is preferred for a mediocre ginger fan like myself. 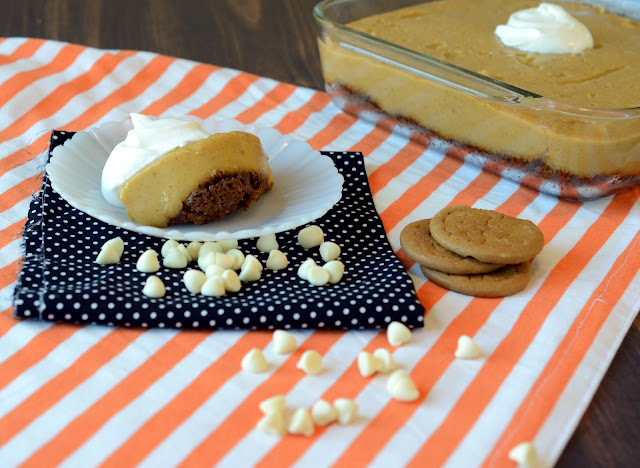 A big thanks to Roxana over at Roxana's Home Baking for setting all of this up.
You can find more details on the party here.

Being part of the Chocolate Party group means that you all get access to the other ladies' recipes too. Here is the collection of recipe from this month's Chocolate Pumpkin Challenge. Just click on the icon to access whatever else looks good, and be sure to check back because people will add to the collection as the month goes on. If you have your own chocolate/pumpkin recipe, you're free to add it to the collection and share the love.

Happy October to you. I hope you enjoy the pumpkin and chocolate recipes.

« Three Things That You Should Know
Backyard Chickens: All Cooped Up »
Craving More