We've been working on the house a ton lately. Thomas has a big engineering project that should come through at the beginning of the new year, so we feel the pressure to get as much done as we can before then.
The weather here in Utah was uncharacteristically mild until yesterday (we just got around 10 inches of snow in one day!). The days were warm and the nights didn't even drop below freezing for much of December. Thomas took advantage of the nice weather to get some big projects done outside.
There are two small bedrooms downstairs in a partial basement. The windows in those two rooms were at ground level and were long and narrow. They weren't up to code for fire safety (they were too small, too high off the bedroom floor, and didn't even open), but because of the age of the house we were "grandfathered in" and didn't have to meet the safety code. We didn't feel great about the unsafe windows, so we went through a lot of effort to change them and bring them up to code. The bigger windows also make the two small rooms so much brighter and happier, a big selling point we hope.
A pit for a window well was dug and then we cut a hole in the foundation to accommodate a taller window. This makes it sound so easy... it was not! There was a gigantic stinky loud concrete saw involved, pouring new concrete because the new windows weren't as long as the originals, tearing out the drywall from the rooms downstairs which meant moving the kids and everything in the rooms upstairs. Wow, it was a mess. And having 5 people sleeping all in one bedroom is hard too, but that's a post for another day.
Here are the men-folk sawing out the old foundation. 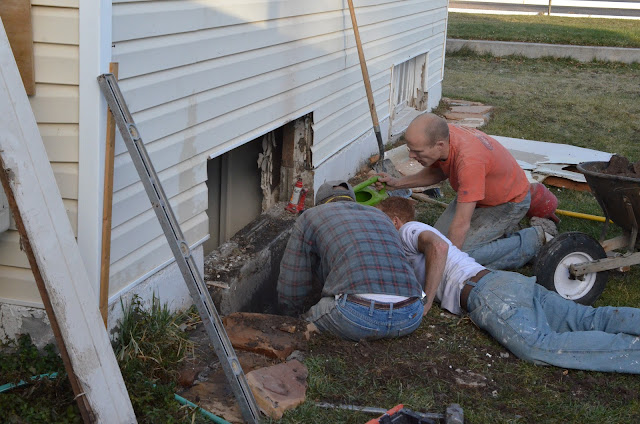 Then: back of the house before they replaced the bottom windows: 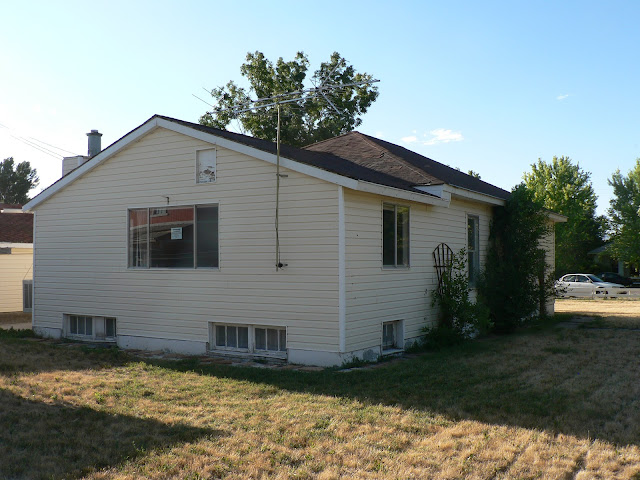 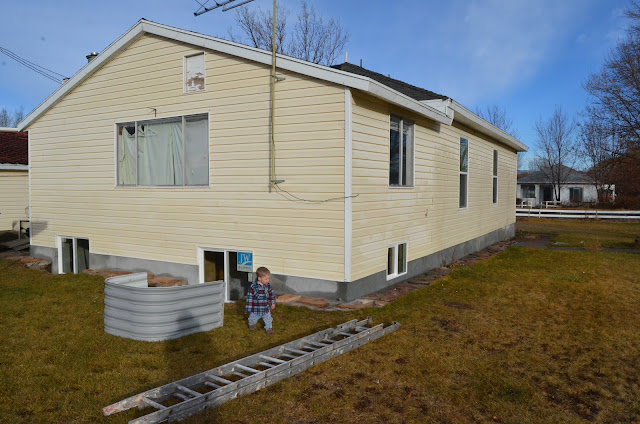 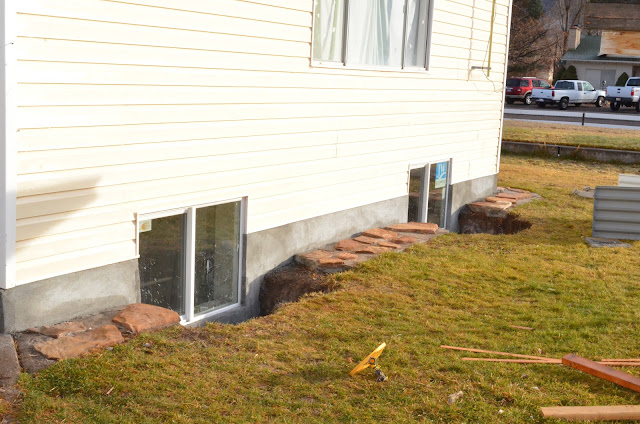 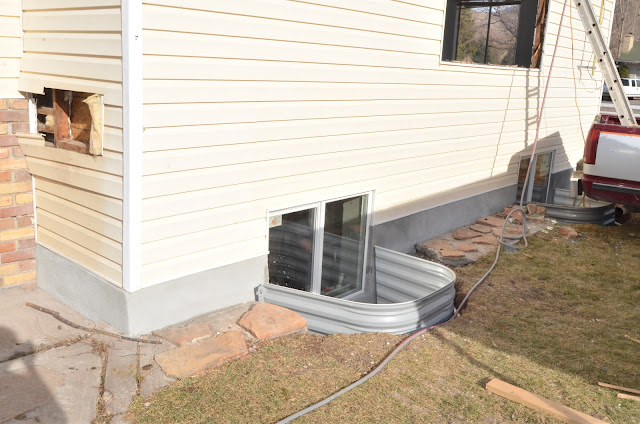 The foundation of the house that pokes out of the ground (below the siding) was in yucky shape. The rock foundation was covered with a thin layer of plaster which was painted. The actual rock foundation is in great shape, but the plaster and paint are cracked, peeling, chipping, and just looked bad in general. Also, both sets of steps into the house were covered with yucky outdoor carpet. Change was needed.
Thomas discovered this cool product called foundation plaster that does just what the name says... he spent 7 days (in the middle of December no less) making the outside of the house sparkle. It was hard, wet, and cold work which actually rubbed the skin of his fingertips clean off (sick, I know, it's still healing). But the end product is so very pretty. No pain, no gain.
Here he is working his magic. The front steps have the carpet pulled off of them here but haven't been covered yet. 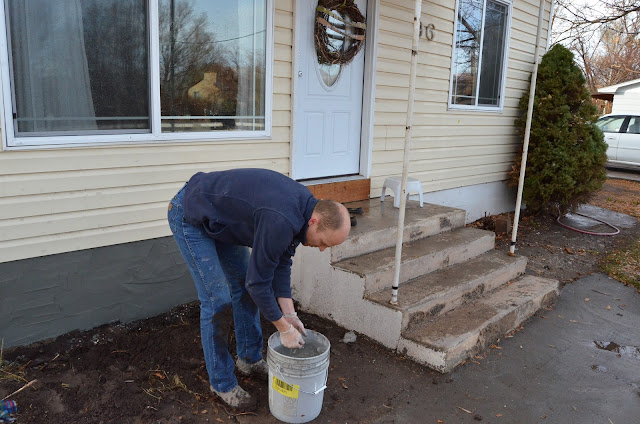 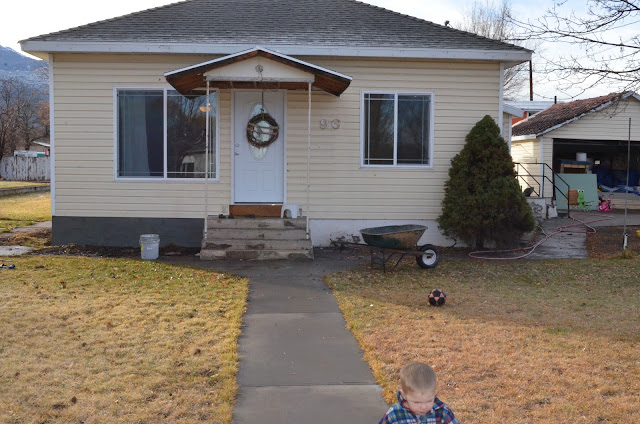 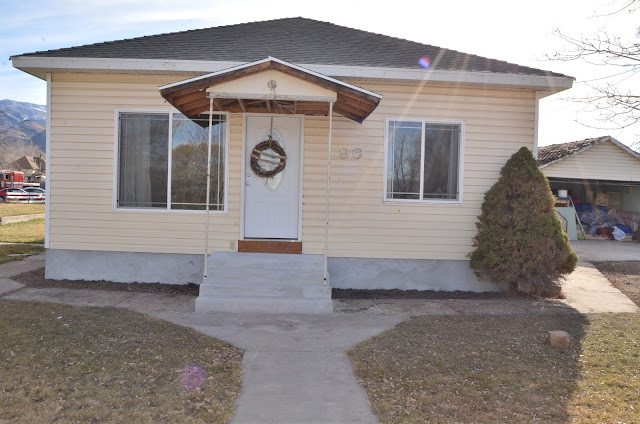 Side of the house: 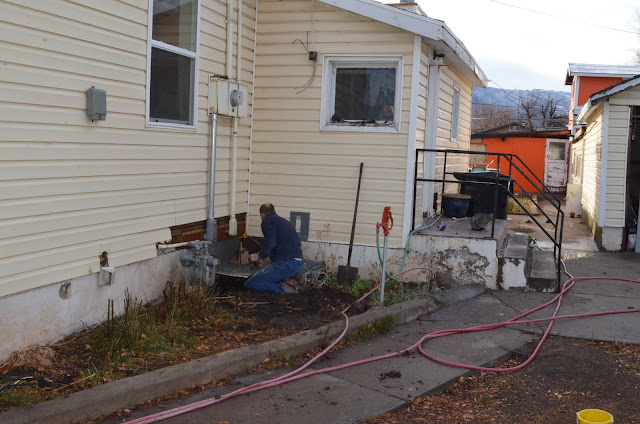 Here are some better pictures of what the foundation looked like. The cracks are just the outer plaster but it makes you think the house will fall over. 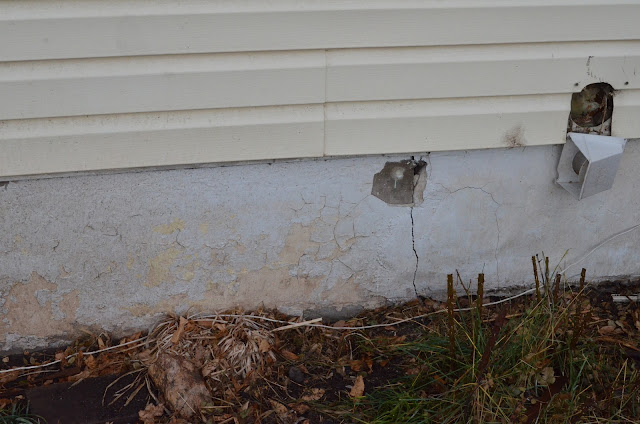 The corner of death as I like to call it. Generally yucky and well, just plain yucky. 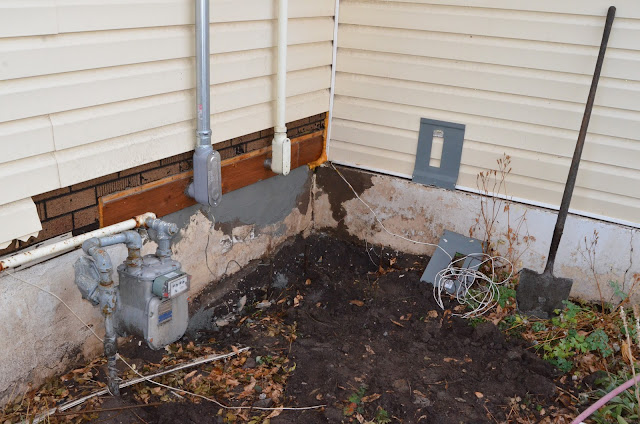 The back carpet-covered stairs and cold Holly cat. 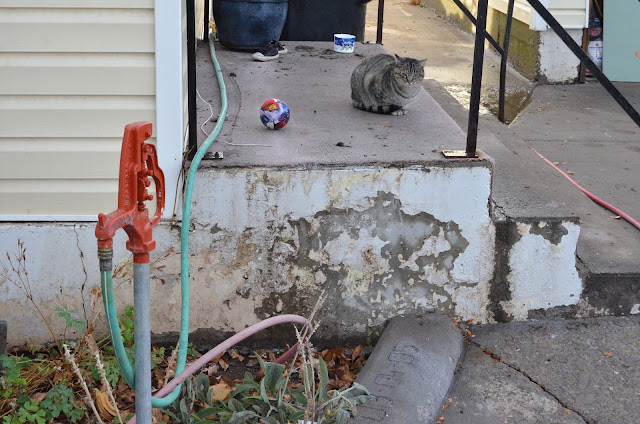 After: Ta-da! The wonder of before and after pictures is amazing isn't it! He replaced bits of the siding that were missing too which helped a ton. 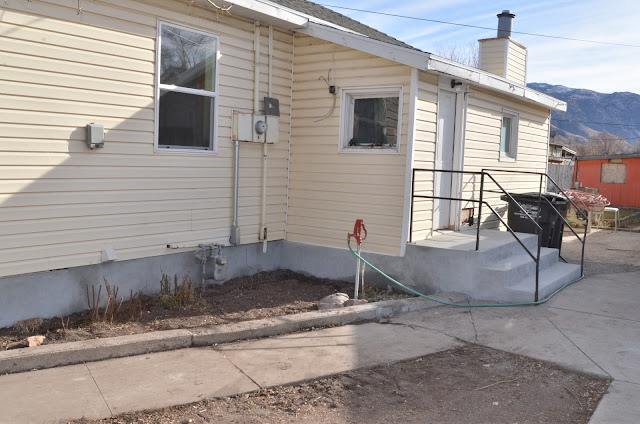 We have a beautiful new door to go here, we'll paint the hand rails, and replace some more siding and it will be as good as new. By getting this done, along with putting on the new roof in November, the house has seen some major curb appeal improvements lately. HGTV would be so proud! 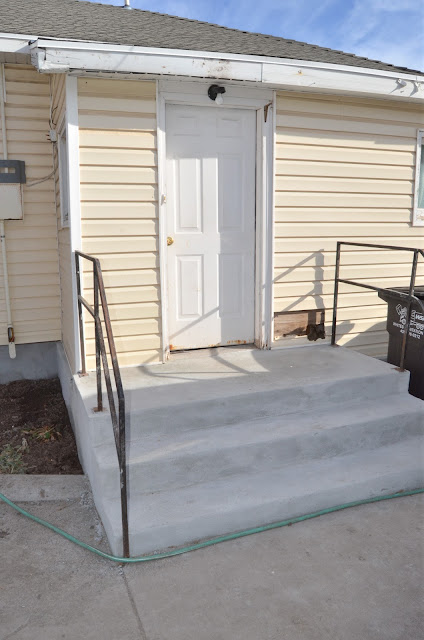 It was totally worth Thomas' loss of fingertips for this upgrade, no? I mean, who needs fingertips anyways?

Thanks for checking out our crazy remodel,

Keep in touch! Blogging is way more fun when I get a chance to connect with you.
I frequent Facebook and Pinterest most, so by all means, tag along and say hello.