Guys, guys, GUYS! We SOLD our house. My house... that house... THE HOUSE! If you have no idea what I'm talking about that's fine, but you have to check out the "Our Biggest Mess" tab at the top of the blog. That tab will give you a recap of the crazy life that I've been living for the past two years. Living in a house while remodeling is super hard but holy cow did we learn a lot. I haven't blogged much about the house this summer because it's been under contract to sell for months and months. I've been waiting for things to get finalized so that I could tell you all (and man is it a tough secret to keep!).

So we settled on a price and we were "under contract" with the buyers at the beginning of June. We JUST signed the final paper work last week and all of those hard-earned dollars showed up in our bank account yesterday; it's September! We had to drive the couple of hours to the town we used to live in to sign the paperwork, so while we were there we stopped by the house and I took some "After" pictures. Thomas had been going up here and there to finish things up and I hadn't even seen the whole house finished. It is SO very pretty, and of course, I took a million pictures to show you.

Is this real? Is it really done and sold and gone?! Some things in life just feel like they'll never really happen, and when they do I just don't even know what to think.

On to the photos.

The yard has taken a beating in our absence this summer, but it's still a cute little house. We redid the porch and the plaster along the foundation as well as had the roof replaced. A little yard work will go a long way though. 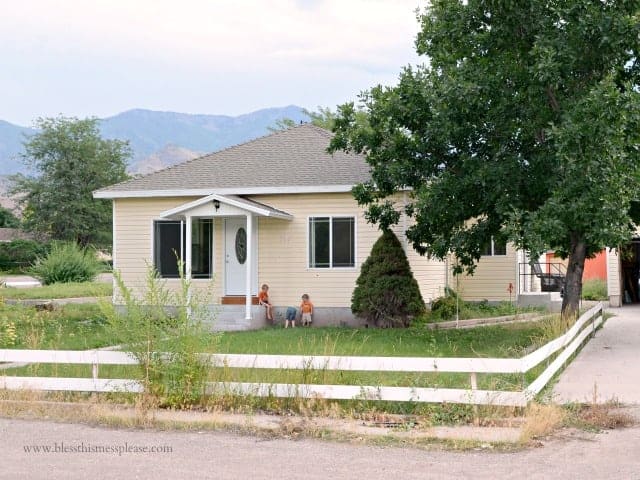 Let's start with the most dramatic change and the prettiest room of all. My kitchen. This is the first house we ever owned and it was the first paint color I ever chose to paint a space to create in. I love this kitchen with my whole heart and miss it daily. The only thing these pictures are missing is my pretty hutch which I painted that fit perfectly in the space just to the right of the stove. 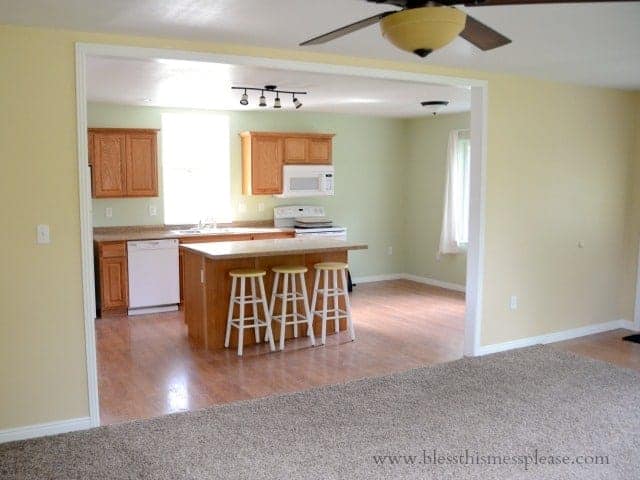 Opening up the living room to the kitchen was the best idea ever. I know that "open floor plans" are popular, but not until I actually lived in one did I see WHY they are so popular. We lived in these two rooms and I loved it. It's so nice to be in the kitchen and still enjoy everything else in the house. 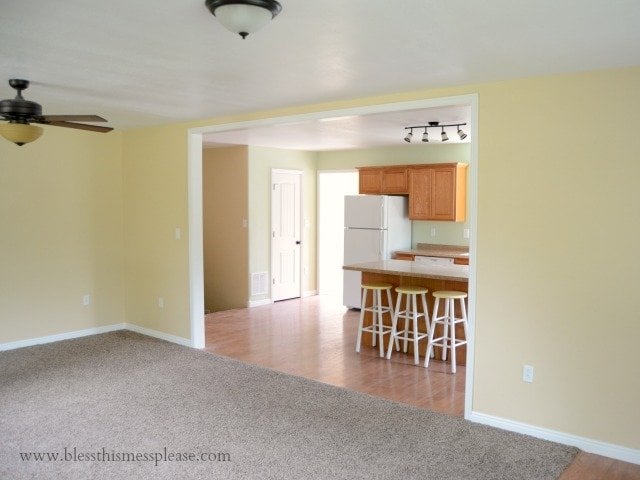 Down the hall is a bedroom, a bathroom, and the master bedroom. It's really nice having so much living space on one floor, and the laundry room is right around the corner from the pantry too. 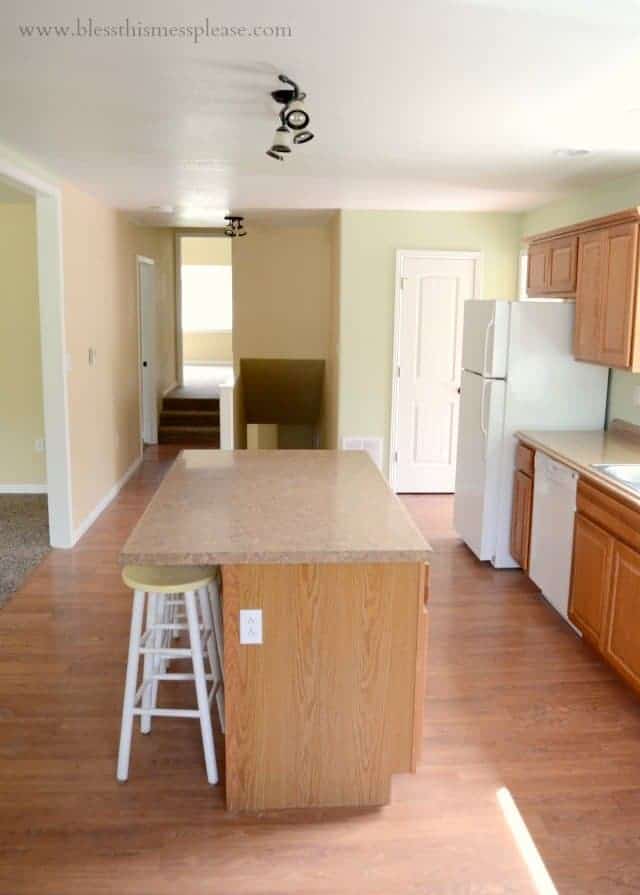 Such a glorious work space. I think what I like best was that it is still so "normal". It's pretty and new but it's not so high-end that you feel like it has to be clean and spotless at all times. I feel like this kitchen looks like "real life" which happens to be a comfortable and pretty life. 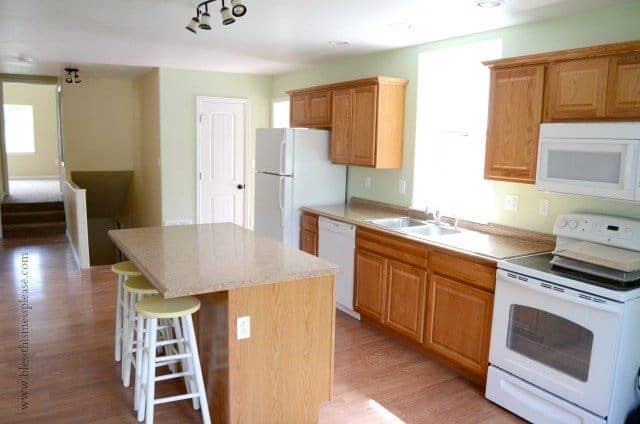 And the first and only pantry I've ever had... *swoon* 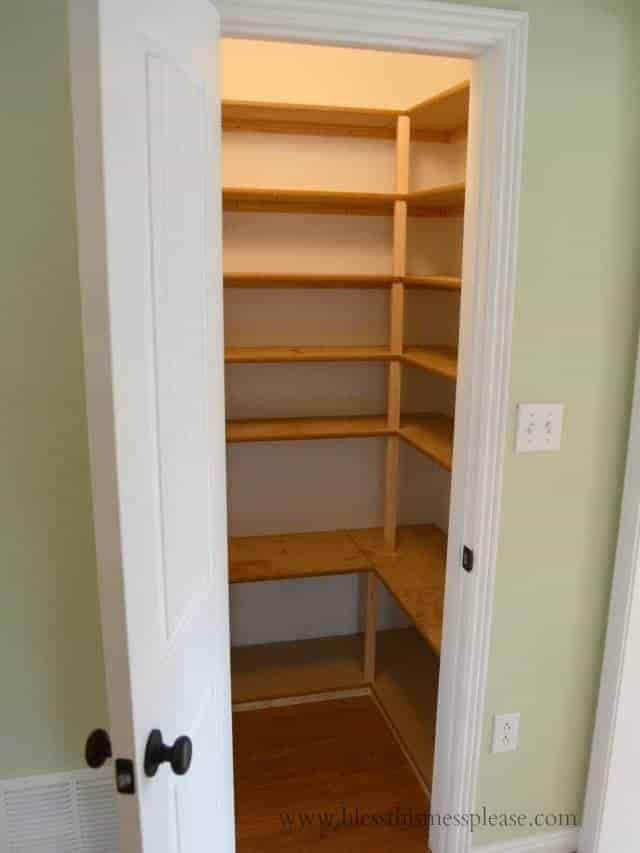 The living room is just one giant open room with a huge 6-foot window by the front door. Perfect for entertaining, living, and just general enjoyment. 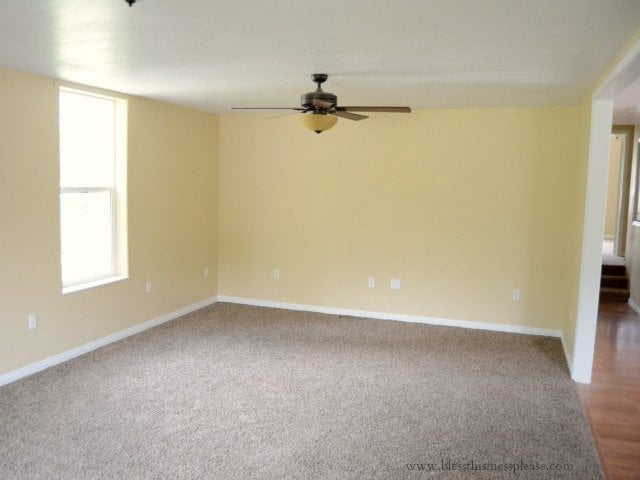 So just down the hall to the left is a nice sized bedroom. This room didn't have a closet when we bought it and actually had a door into the living room in it. We got rid of the door, added a closet, and love it. This would be a perfect home office/sewing room/play room if you didn't need it as a bedroom. 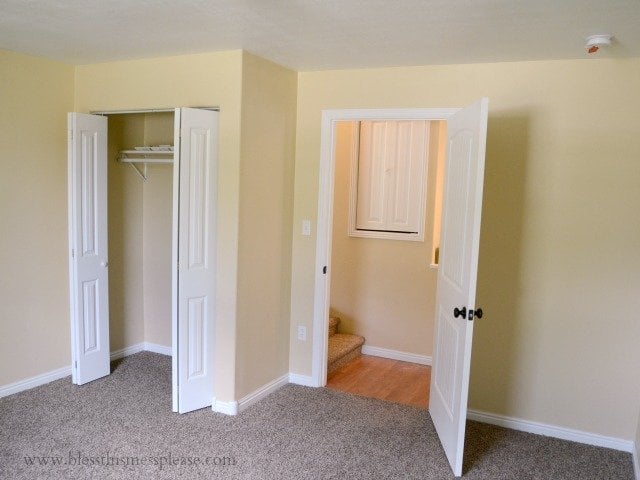 See that closet outside of the door? Well normally it is just unused space that is above the stairs. My ninja husband figured the space could be a closet in the bathroom (just inside the door) and another deep closet in the hall. Who doesn't love storage? The engineer in him really makes him good at remodeling and figuring out the best use of space! 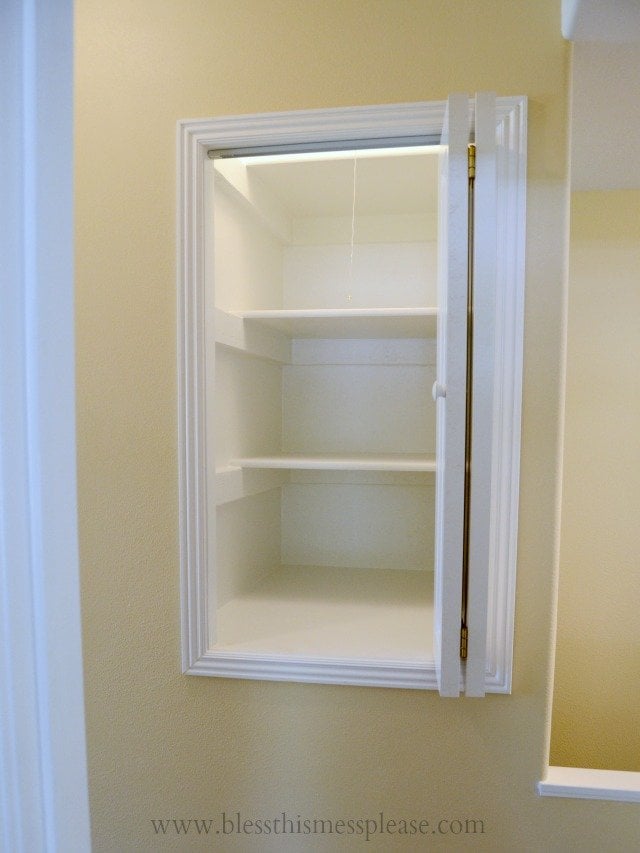 Then up the landing (just two steps) to the right is the main bathroom. It's the same color as the kitchen and is a very clean and functional space. It was hard to get a picture of but I'm standing in the bathtub/shower as I took this picture. SO much better than the pink tub and pink tile that adorned the last bathroom. Sorry the picture is a bit blurry... I should have taken more than one. 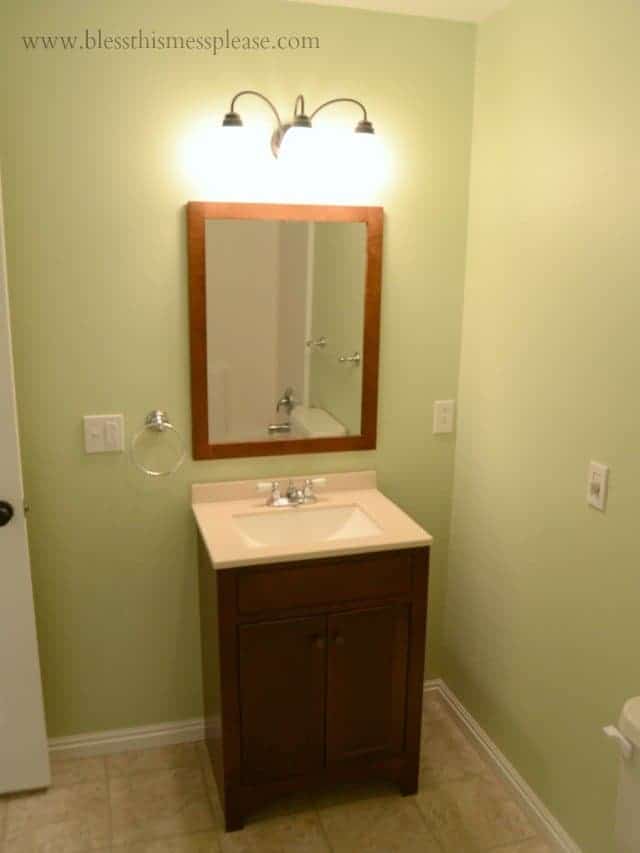 And then at the top of landing is the master bedroom. This room has so much emotional involvement for me. When we first moved in we all lived in this room for months and months (almost 10 of them). This one room was my bedroom, office, kitchen (no water or kitchen sink though so I washed dishes in a bucket from water I hauled in from the bathroom), living room, everything! This room is where I started this blog... Oh, how I wish I were better with words and could help you understand what a hard and growing time that was. All in this room.

It didn't look like this when we were living in it though! We vaulted the ceiling (best idea ever) and added the bathroom after we moved into the front part of the house. In fact, I never even got to sleep in this room in all of it's master bedroom glory. We moved out before it was finished. 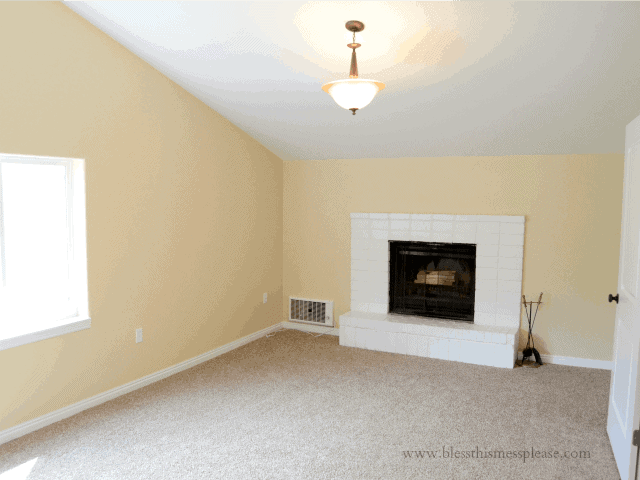 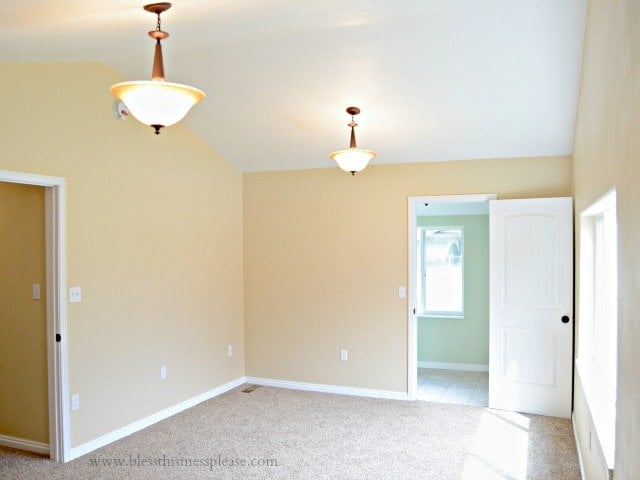 Adding a bathroom really made this room awesome! My husband is so smart 🙂 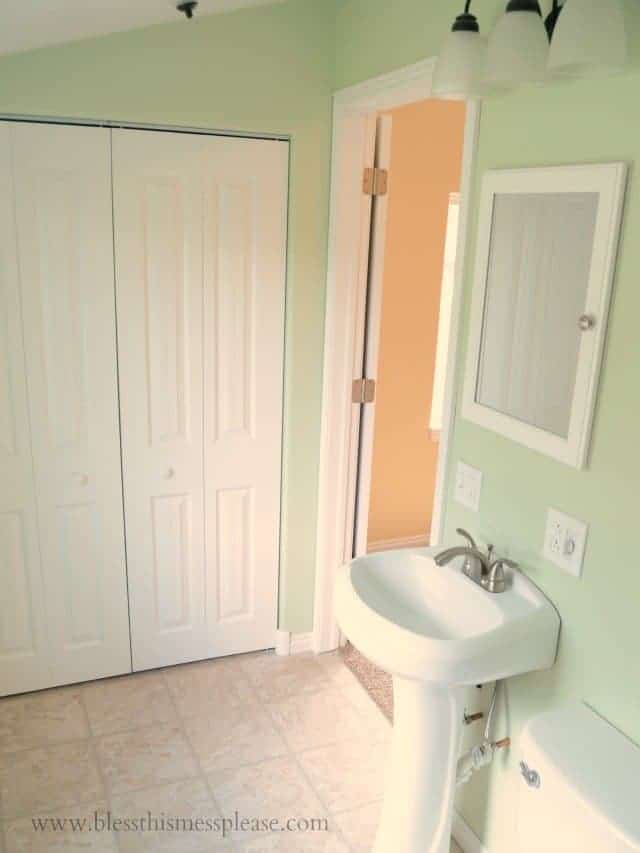 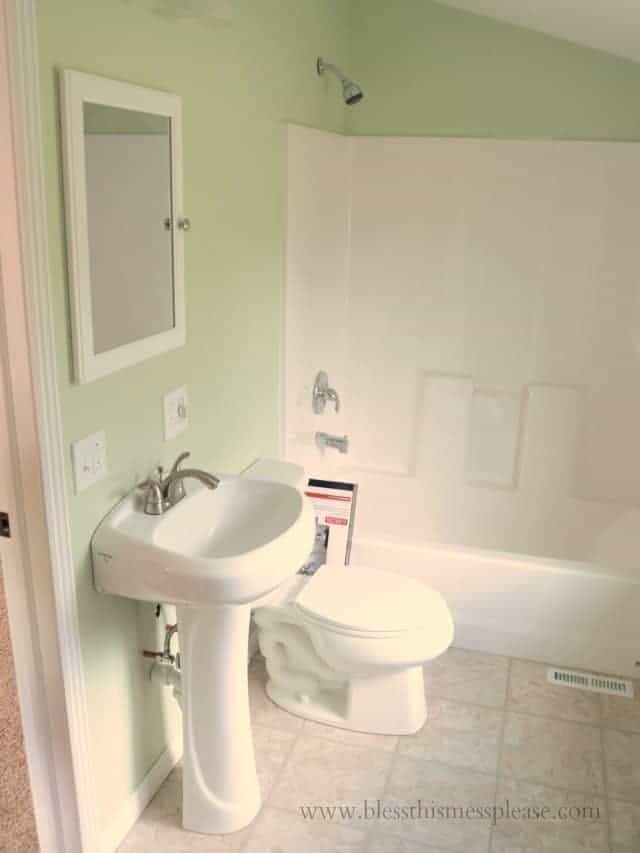 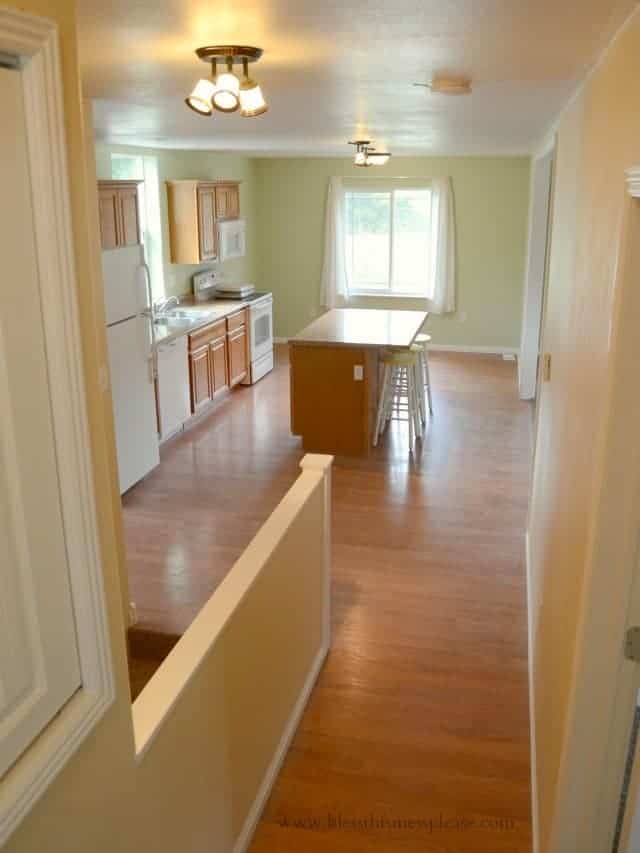 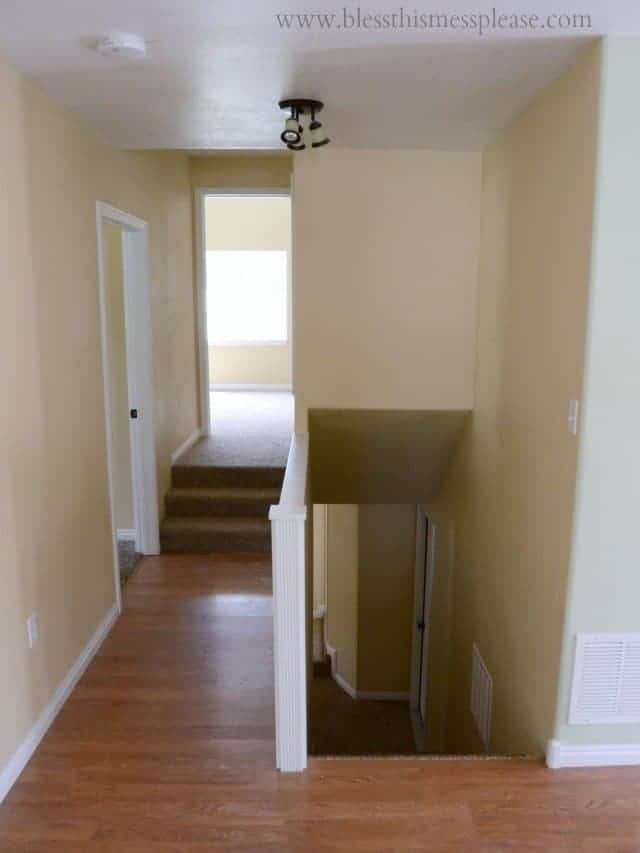 There are only two bedrooms downstairs (it's only a partial basement) and then all the utilities and things. So the bedrooms had really short but super long windows in them. Thomas used a crazy huge saw to cut the foundation of the house to make deeper windows and window wells. The rooms are so much brighter and safer now. It's amazing what a little light will do. 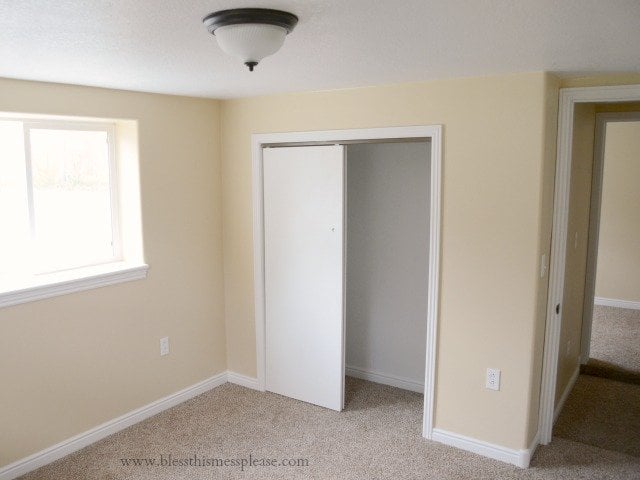 The rooms are super similar but made for great kid rooms. Very practical and nice now. 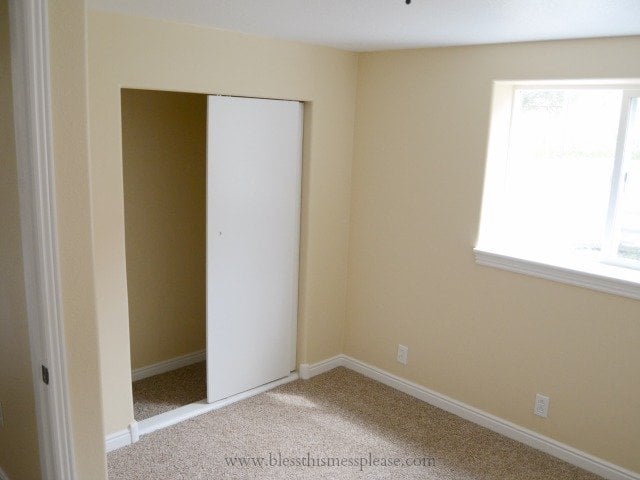 And here's a peak at the utilities. This room was so gross for so long, and I had to do my laundry down here! We still call it the chokey (Matilda!) even though it's all clean now.

And last but not least - my pretty laundry room. This room used to be the most disgusting bathroom. The shower was a tiny little RV shower surround that just stood in the corner of the room. The hole for the drain was too big so every time you stepped in it, it felt like you were going to fall through the floor. That bathroom was mine to use for over a year. Oh man am I grateful to have moved on from that. And again, Thomas with his vision, saw way more in this house than what we started with. Where the washer is now was the stairs to downstairs and while we were remodeling it was the doorway to get into our big room. Here's a gorgeous use of the space now: 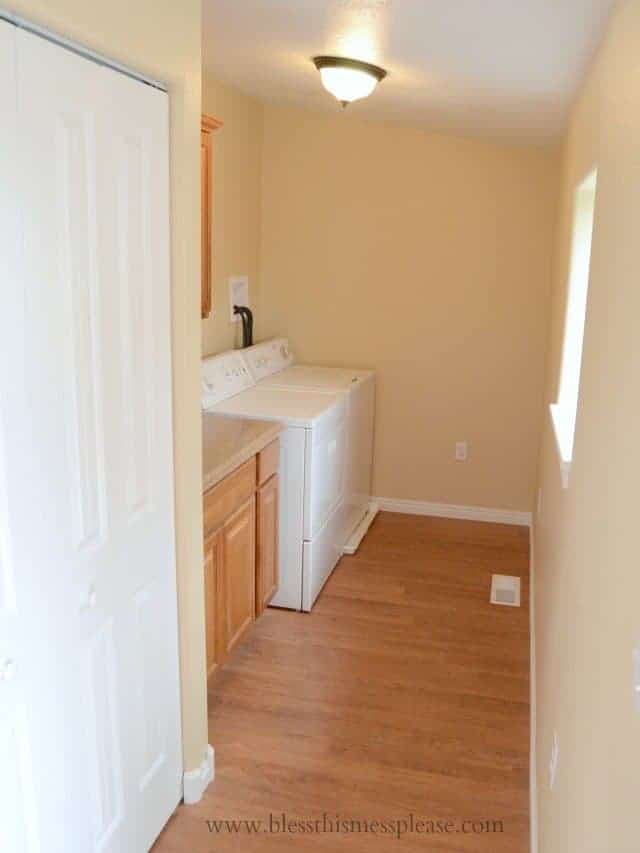 And here's the side entrance. I love the door Thomas picked. It lets in a lot of light to the laundry room and kitchen but is frosted so it still feels private. 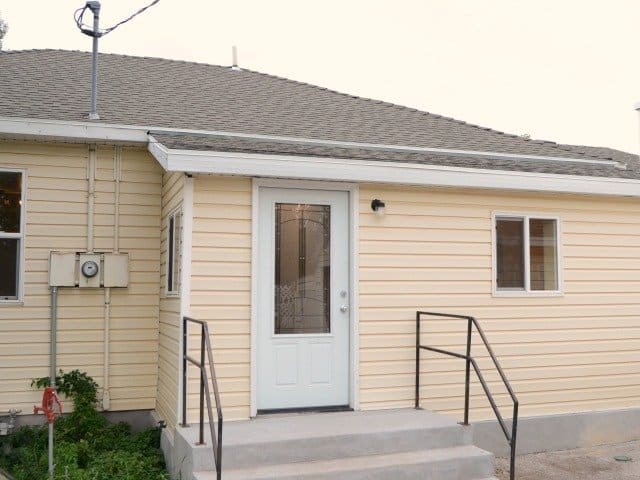 And in the middle of trying to sell it the buyer's lender had issues with the condition of the garage roof, so Thomas, his dad, my brother, and my brother-in-law came up on a Saturday and replaced it. Looks pretty fancy! Now the rest of the structure just needs some work. And you can see our ugly orange barn in the background too. That thing could be awesome with a lot of love, but we just didn't get to it. 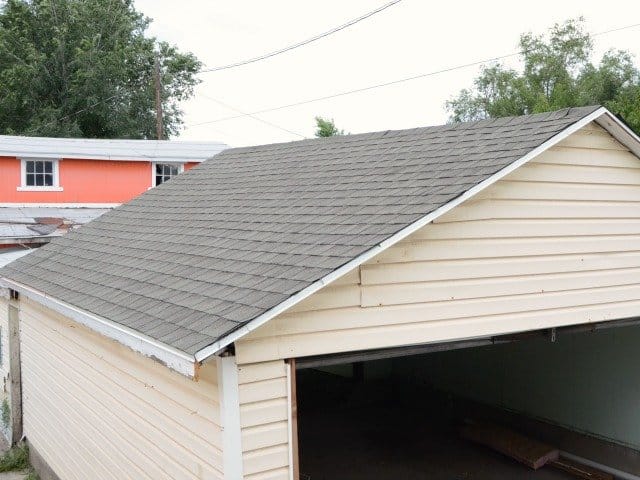 There you have it! The final tour of our house. Two years worth of night-time and weekend work with shining results.

Thanks so much for letting me share... this house has been such a big and consuming part of my life and remodeling it is why I started blogging in the first place. I felt like I had to write down what was happening or no one (even me!) would believe that really happened in the end.

You guys are great.