The hobby farm dream is alive and well this spring. We've been living in Southern Utah for just over a year, and starting things for the second time is so much easier than it was the first time. I'm feeling more confident and more comfortable which means it's a good time to expand the dream.

And expand we did! We got bunnies last week! 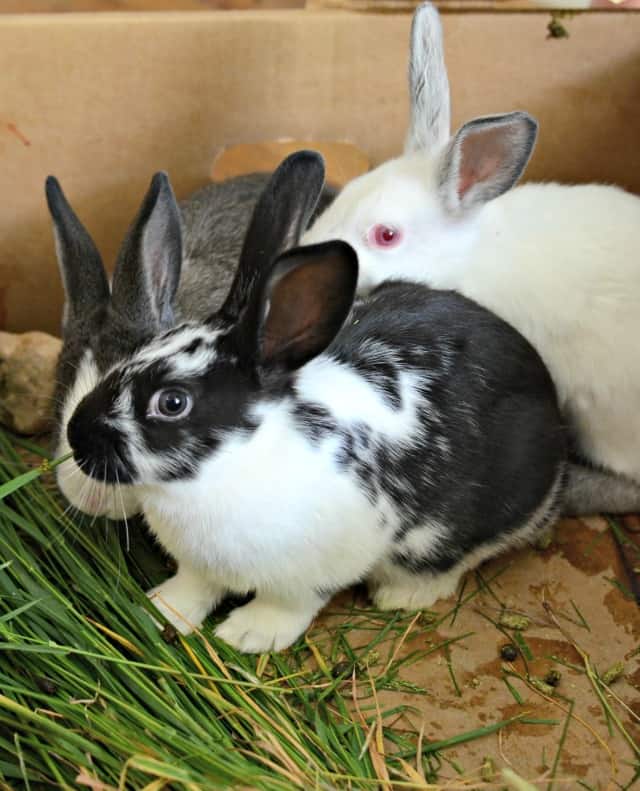 We ran to the next little town over to pick up some more plants for the garden from a man who had grown all kinds of things in his greenhouse. While we were there he opened a door to a shed to grab a flat to carry my plants on and a whole world opened up. It was a large dimly lit shed chalk full of rabbits. This man had grown rabbits commercial for years and still hung onto some of that hobby. The kids were so excited and asked if we could have a bunny. He said they were $5 each and I said we had a deal. An hour later we had three mid-sized bunnies in a box in our yard and three very excited children. 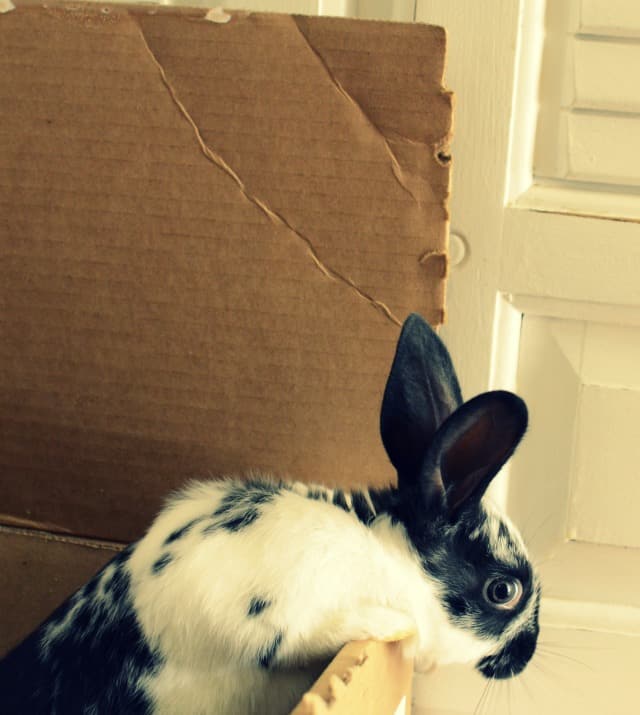 The vision with the bunnies is to have them as productive pets. We are planning on making them some kind of bunny tractor (mobile pen) that is as wide as the rows of my garden. We'll keep them in the garden, and they'll eat the weeds in between the rows and fertilize as they go. We'll just move them as often as needed so that they have fresh weeds to munch on and don't have time to burrow out. I think down the road we will think about breeding the rabbits and using their off-spring for meat. Rabbits for meat are on our list of useful things to figure out.

I honestly don't even know their genders of these rabbits, and for the life of me, can't figure it out. You all would have laughed at my husband and me the other night if you were here to witness our first attempt at sexing the bunnies. We had out our favorite animal book (The Backyard Homestead Guide to Raising Farm Animals

), complete with pictures, had the bunnies laying happily on their backs, and had no clue what we were, or were not, looking at. I guess we'll have to call in the local bunny expert or take them back up to the man we bought them from because I'm feeling a little clueless on the issue.

We also acquired four new chickens this week, two of which are roosters. They are spring chicks from this year, so they aren't tiny but still about half the size of our other chickens. A friend's daughter brought them home from school and now, a few weeks later, wasn't so excited about having 4 growing chickens living in her kitchen.

When someone asks if you want free chickens there is only one correct answer!

We don't want to put them in with the other chickens because of their small size, so we are thinking about making them their own chicken tractor and having them work down the rows of the garden too. They don't really need nesting boxes since they are too young to lay, so we think it might be a great option for them this summer. I'll let you how both of those adventures go.

The bunnies were in a box outside and inside at night for the first few days that we had them. One night Thomas woke up in the middle of the night to find bunny poo everywhere. The black and white one had escaped and was wondering the house making a mess. Did you know bunnies are nocturnal? I sure didn't. After a thorough house cleaning we got a pen made for them outside. I'm just waiting on a waterer from Amazon and then we'll move them over to the garden.

The chicks happened to show up the night that the bunnies were staying out in their new pen, so we just put everyone in there together. I was a little nervous, do chickens and rabbits live together? But they have sure done well for the last 2 days. I went out to check on them this morning and there was a chick sleeping on top of a sleeping bunny! It was the stuff Hallmark cards are made of, but of course they had moved by the time I came back out with my camera. We'll separate them this weekend when we get everyone set up at the garden, but until then, they seem to be unlikely friends. 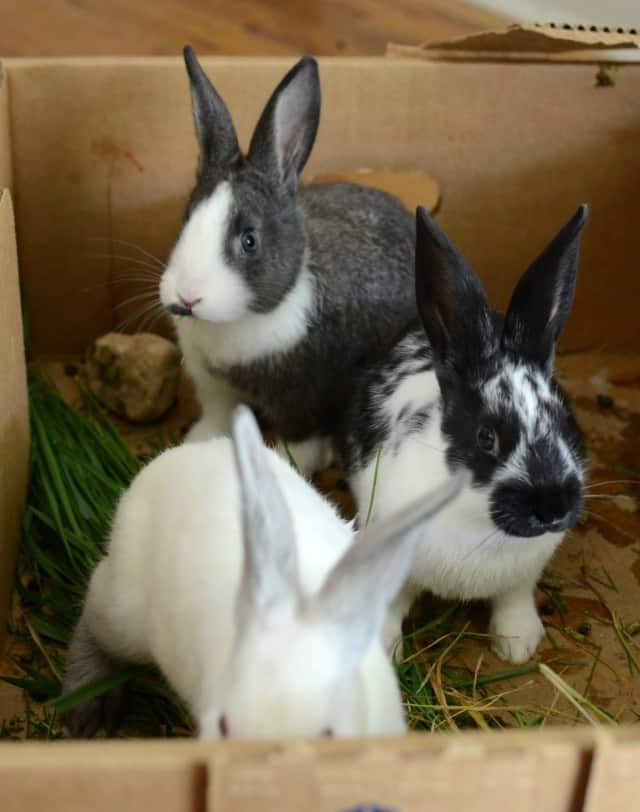 And the last but not least. We have a pig! 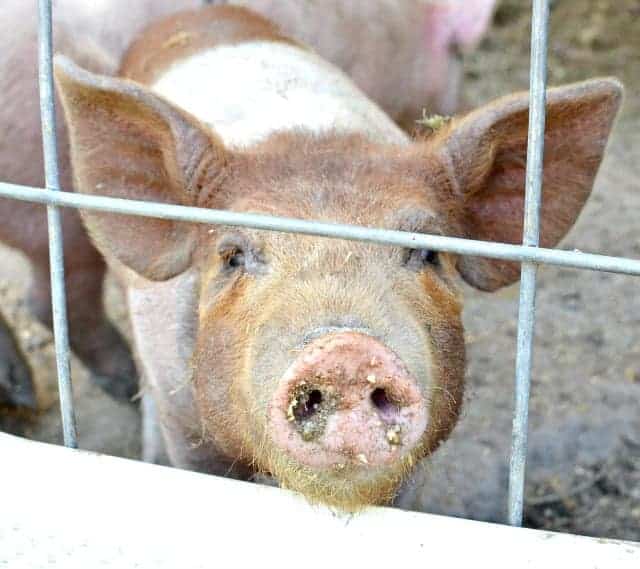 His name is Brownie and he lives at my niece's house with her show pig for the fair. We don't really do anything with him and have only gone over once to say hi. His purpose is to live a happy life and then we'll put him in the freezer in the fall. I'm a little glad that we don't have a relationship with him or have him on our property. Pigs have smart and knowing eyes and I think it might be harder for me to eat them in the end. So for now, my niece and sister-in-law take care of him and we are just paying for him and his feed.

I've also been planting my garden like a mad woman the last 3 weeks. It's now safe, weather speaking, to put anything you want in the garden in Southern Utah and I've been doing just that. Thomas has been gone a lot so I have literally planted the entire thing myself, with the kids in tow. I wear the baby on my back and he falls asleep and the big kids help me plants a little (they planted three rows of corn the green beans), play in the mud a lot, and we bring bikes over too. It's a fun hobby and I'm grateful I have the land to do it. I know my kids are going to have great memories of our mornings at The Shanty. 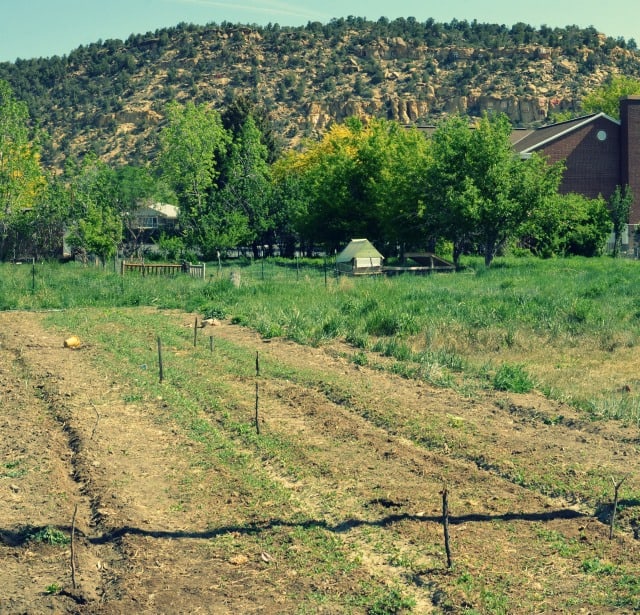 Here's the already weedy garden. It's about ⅕ of an acre. Can you see the chicken coop in the back ground? We move them over here for the summer to enjoy all the grass and we are planning on getting lambs again this year. Four this time instead of just two (are we crazy?!).

I love having a huge garden. I love cooking with it, I love canning and storing it, I love sharing it, and this year, I hope to sell some of the bounty at the farmer's market.

I've said it before and I'll say it again, I'm a total hobby snob and I think I have the best hobbies around. Long live the hobby farm!

Now tell me, what do YOU have in your garden this year? What do you look forward to the most?