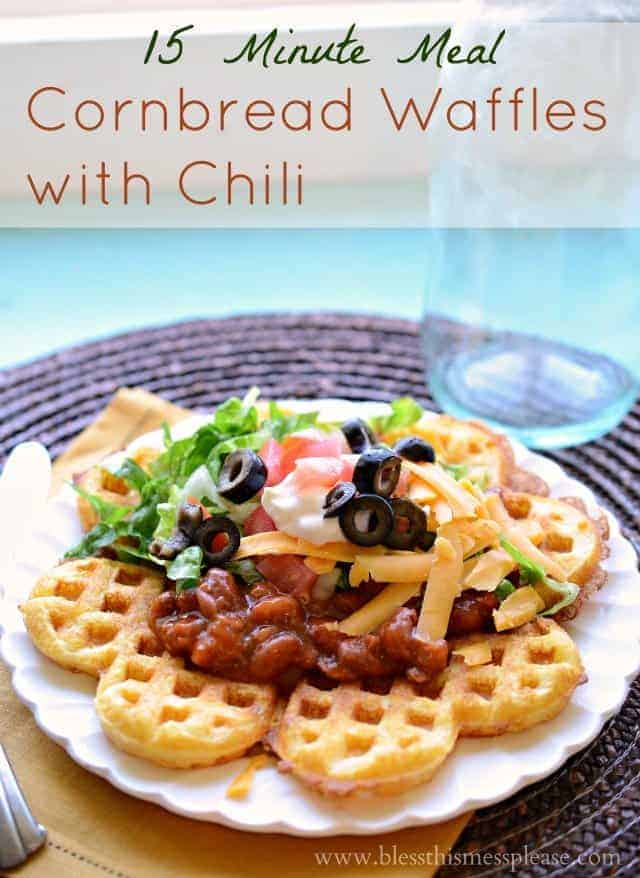 This easy Cornbread Waffles with Chili recipe takes 15 minutes to get on the table! The whole family will love adding their own toppings to this breakfast for dinner meal! 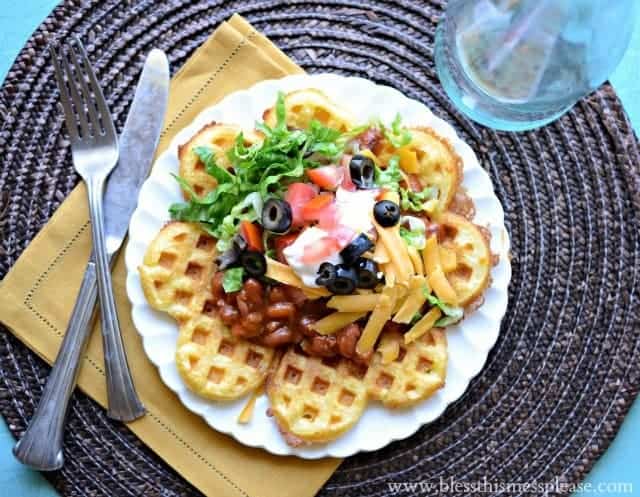 A Quick Dinner Idea Your Family Will Love!

My mom and I have really bonded over the blog. In the last 18 months or so we have spent tons of time on the phone talking about recipes, craft ideas, working through problems or comments that may have stung a little. She's definitely my number one blog fan and it means the world to me. She came across a few recipes in her local newspaper and was excited to share them with me. She was on the phone telling me about cornbread, cooked in a waffle iron, with chili on top. Huh?? I'd never even heard of such a thing. It sounded easy enough and for some reason I just had to make it. I went to the store and picked up what I needed and made it that very night.

Are cornbread waffles easy to make?

Cornbread waffles with chili was shockingly delicious and probably the easiest thing in the world. You can't beat a meal that takes 15 minutes to put together, and I didn't have to turn on my oven in this summer heat either. Double win! I was shocked at how much my family loved it. If you have ever had Navajo Tacos, this eats a lot like those, which is a very good thing. The corn bread and chili were a great base for all of your favorite toppings. My kids love anything that they can customize and this was just perfect for them.

In the notes of the recipe, I mention how to use your favorite cornbread recipe and homemade chili instead of the store-bought stuff if that is more your style. I honestly had to go pick up the mix and the can because they aren't things I keep on the shelf.

So trust me on this one and make it soon. It was tasty, fast, and needs no oven - always a good thing in my book.

Tips and Tricks for Making Cornbread Waffles with Chili

Craving more? Subscribe to Bless this Mess to get new recipes, meal plans, and a newsletter delivered straight to your inbox! If you try this recipe, let me know what you think! Leave a comment, pin it, and don’t forget to tag a picture #blessthismesseats on Instagram. I love to see your kitchen skills in action!

This easy Cornbread Waffles with Chili recipe takes 15 minutes to get on the table! The whole family will love adding their own toppings to this breakfast for dinner meal!

For the Cornbread Waffle

The recipe comes from my Mom's newspaper in Kentucky and it sites the Jiffy Cornbread box as where it got the recipe.

So what do you think? Do cornbread waffles with chili sound good or weird you out?!

Enjoy from my kitchen to yours!