It's been months since I've updated you on my feathered babies, and they've grown up right before my eyes! The ladies are now four months old and all of their adult feathers are in. They roam the yard and find their way back into their coop at night. They eat chicken food, table scraps, foliage, and bugs that they find. They meander and find shade wherever they go.

The rooster started to find his voice a few weeks ago. He sounded just like a teenager going through puberty. He squawked and his voice would crack mid cock-a-doodle-doo. It was hilarious and awful. Can you imagine being woken up by a puberty-stricken rooster at 4:45 am every morning? He also started to establish a pecking order. He would chase and pin down the ladies, plucking feathers from the back of their necks (the less feathers they have on their necks, the farther down his favorites list they are). I will be the first to admit that I was not a fan; the kids got worried every time he'd harass the ladies, too. I know what comes next in the life of a rooster, too, and I have no desire to see chickens copulating in my backyard (and try explaining that to a kid). So I gave the rooster away.

I waited until the birds went back into the coop for the night, and then I opened the top and snatched him up. I put him inside a box and drove him to a friend's dad's farm where I tossed him over the fence into their coral. I'm sure that the farmer got a surprise in the morning because later my friend told me that she forgot to tell her dad that I was bringing him over! Oops. It's nice to have him gone even though he was getting so very pretty. I thought about trying to eat him in the fall, but I knew that I wouldn't be able to do it. 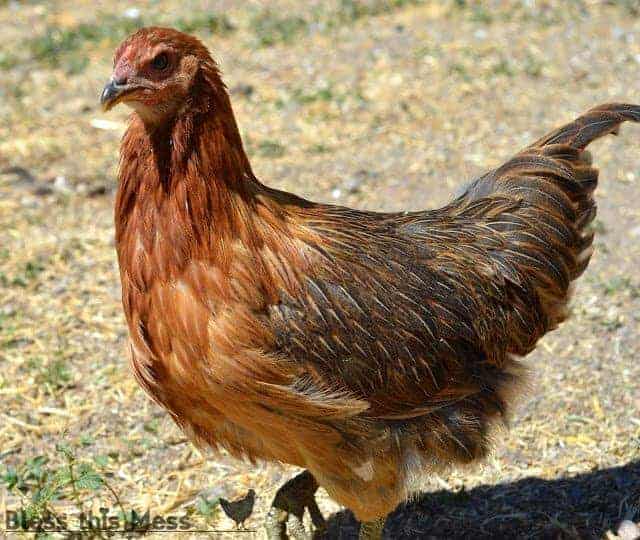 Dirt baths in the garden.

Lounging and eating in my peas... naughty birds.

More dirty baths. Seriously, it is such a funny and cute thing to watch. 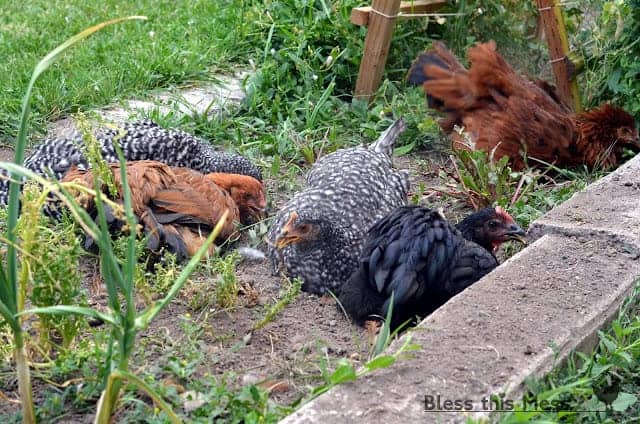 There you have it. My feathered babies are getting big. I'm down to seven hens (since one was a rooster) and I should have eggs sometime soonish. I'm not sure if all the breeds start laying at the same time, but guaranteed you'll know when I find my first egg. I'm so excited to see some return on my investment.

Now that some time has passed I would strongly recommend getting a backyard brood if you've been thinking about it. I enjoy it much more than I thought I would. Watching the chickens peck around the yard is just calming and entertaining. We laugh all of the time at the silly things they do and they have been really easy to take care of. Urban homesteading is trendy for a reason...it's great.