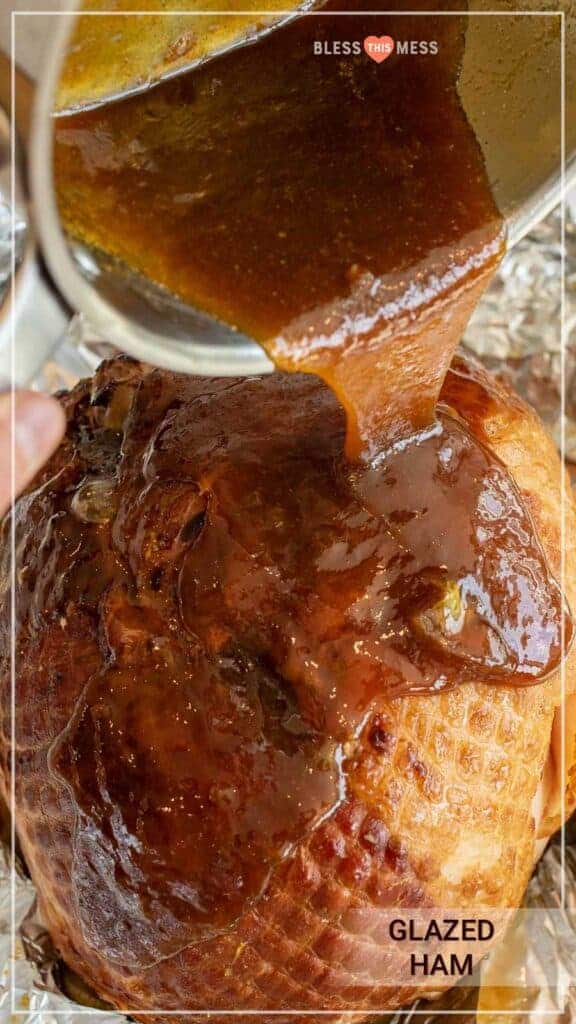 Brown sugar glazed ham is an easy, flavorful recipe for juicy ham with a sweet and salty, caramelized outside, perfect to serve to a crowd for a holiday meal.

Ham is a holiday meal staple, and this simple recipe gives you all the tools to glaze your own at home for big flavor and a satisfying and delicious end product. 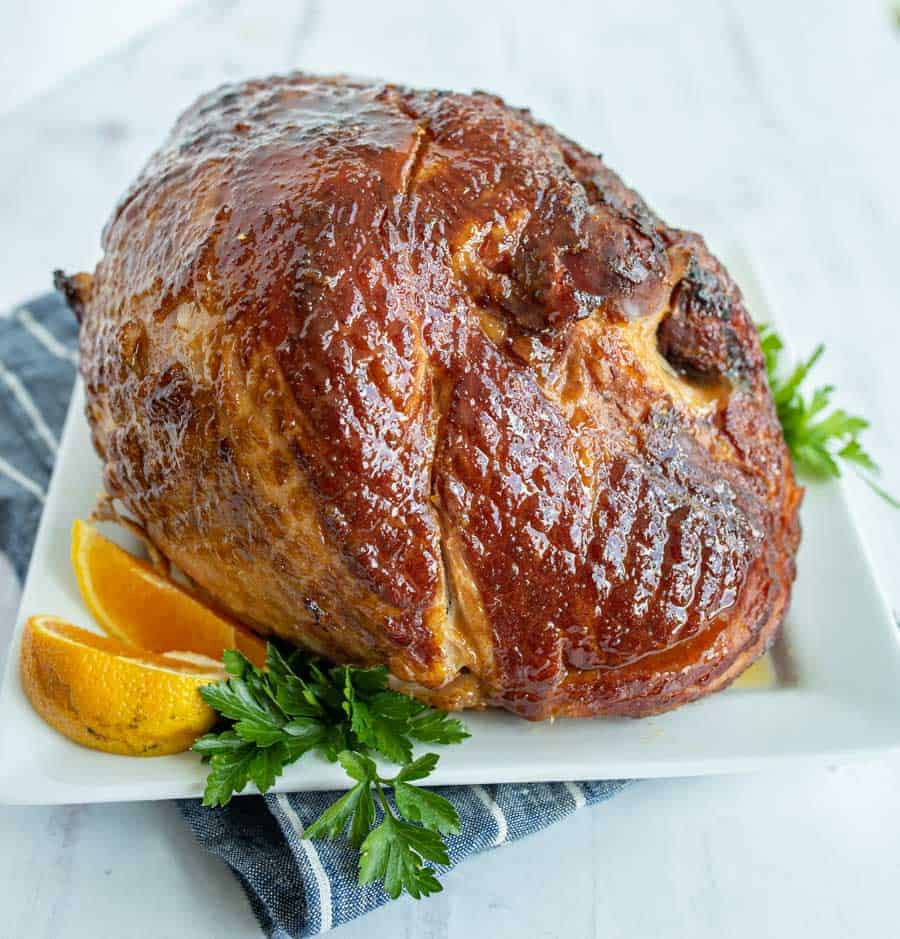 Which side of the holiday protein debate are you on: team turkey or team ham? Personally, I like a little bit of both on my plate, and if you're a ham lover, then this brown sugar glazed ham recipe is going to be right up your alley. To make it super-simple, you just start with an already cooked ham, add the flavorful glaze ingredients, and bake it for a few hours. If you want to start with an uncooked ham, you definitely can do that, but make sure the correct internal temperature is reached before serving to ensure it's properly cooked.

This recipe creates juicy, big-flavored, slightly sweet and salty slices of ham every time, and it's the perfect option for a holiday dinner where you have a big crowd to serve. And, it's the dish that keeps giving because glazed ham leftovers are seriously divine on rolls, sandwiches, or just by itself with other holiday fixin's. You'll love this easy, scrumptious, rich ham recipe that is a great recipe for any big gathering or holiday meal. 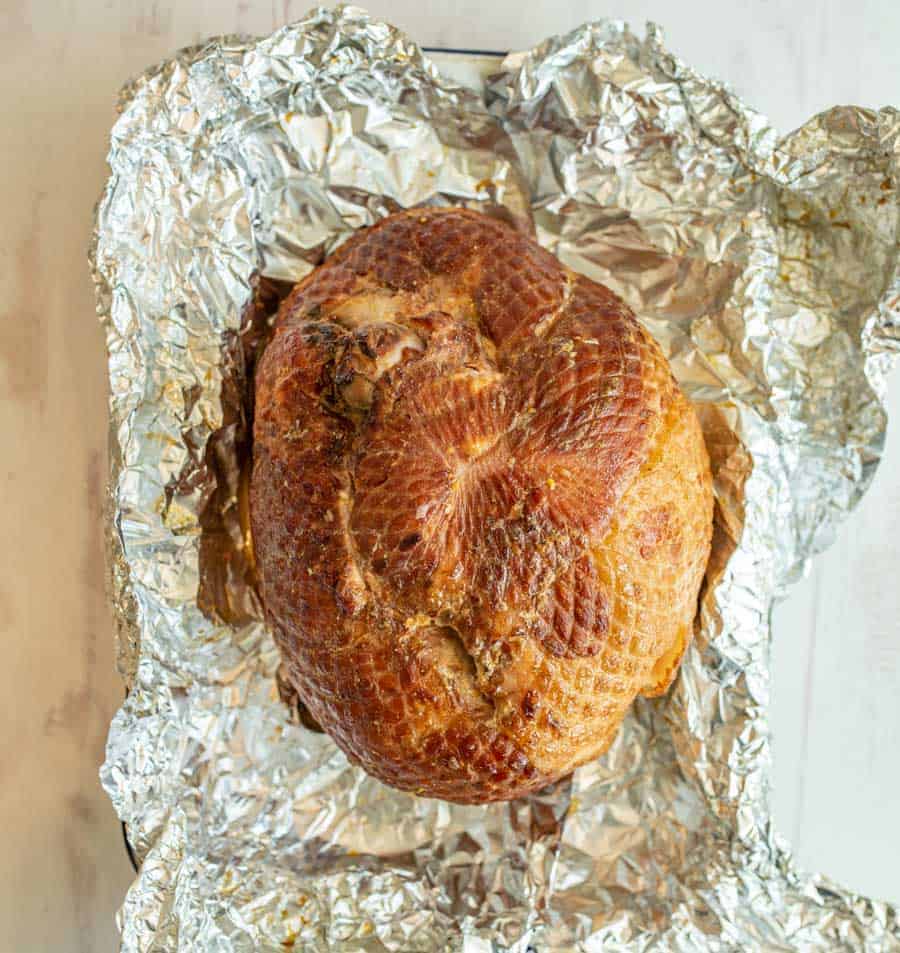 Do you have to glaze a ham?

Glazing a ham is optional, but I think it adds the best flavor and texture to the end product, and keeps the ham nice and moist. I love this glaze because it's a little sweet and a little savory and it goes so nicely with a salty ham.

How do I cook a precooked ham?

I love getting a precooked ham and glazing it to add more flavor and a caramelized texture to the outside. To cook it, preheat your oven to 325 degrees F., and add ⅓ of your glaze to the ham before wrapping it in foil and placing it in a baking dish in the oven. Cook it for about 15 minutes per pound of meat, until the internal temperature is 100 to 110 degrees F. 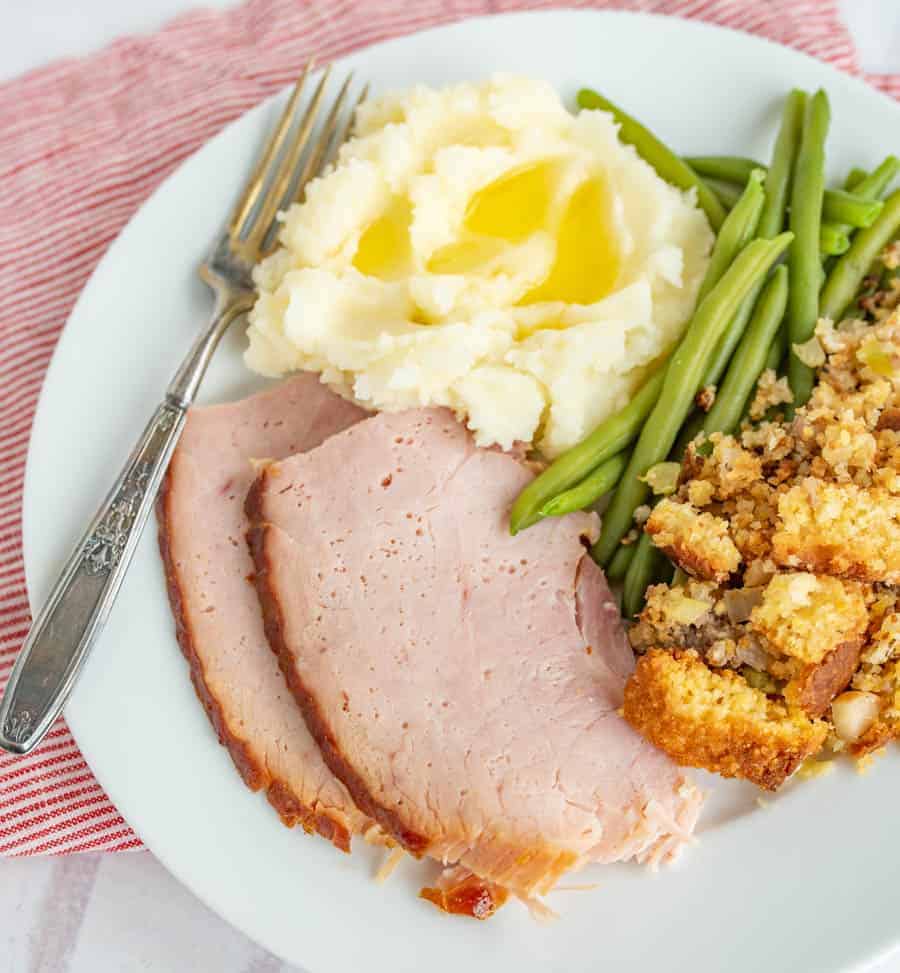 Why is my ham tough?

Ham requires slow, long cooking in order for it to become really tender. It's a dense cut of meat, so low and slow is the way to go for juicy, tender, melt-in-your-mouth ham. A 15-pound precooked ham will take about 3 hours of cook time to get it glazed, heated, and ready to eat.

How do you keep a ham from drying out?

Using water, stock, or a glaze will help to keep ham moist. Also, covering it tightly with foil for the majority of the cook time helps to lock in moisture and keep the meat nice and tender. 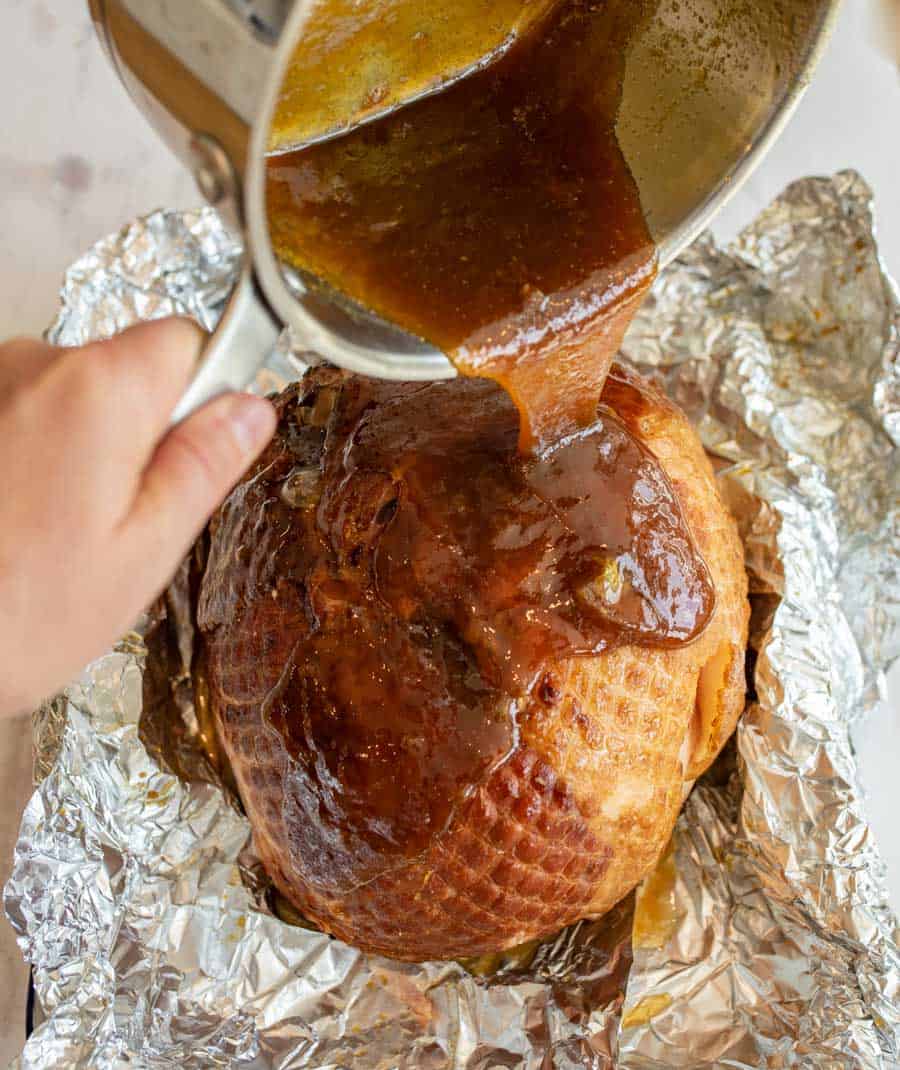 How to make glazed ham: 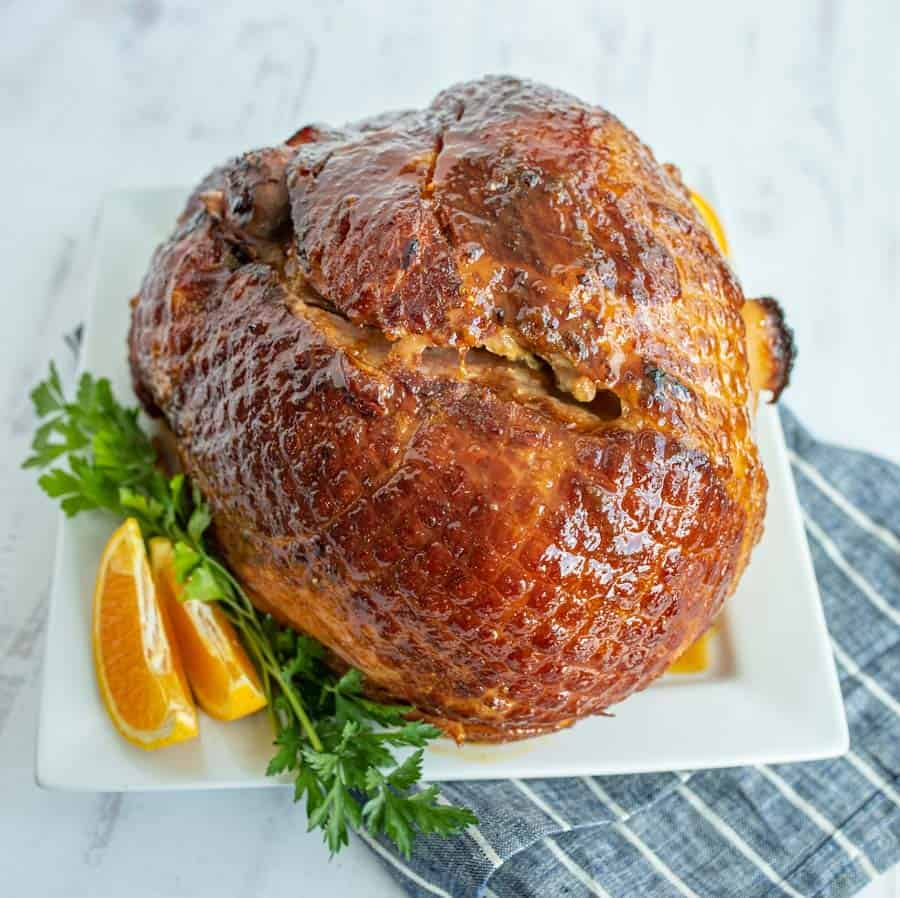 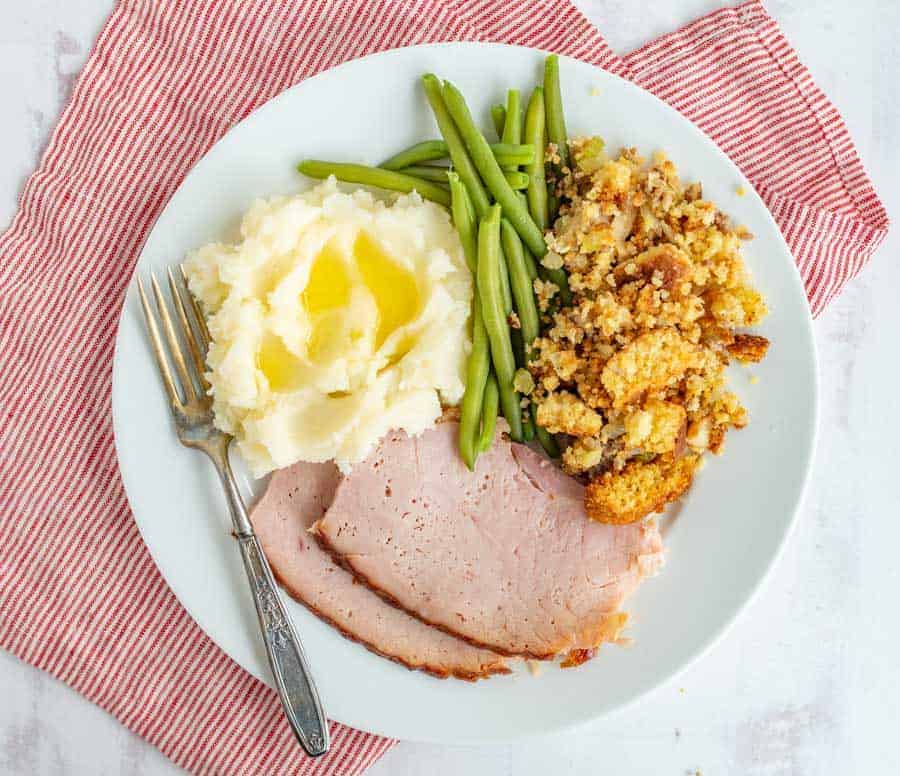 Brown sugar glazed ham is an easy, flavorful recipe for juicy ham with a sweet and salty, caramelized outside, perfect to serve to a crowd for a holiday meal. 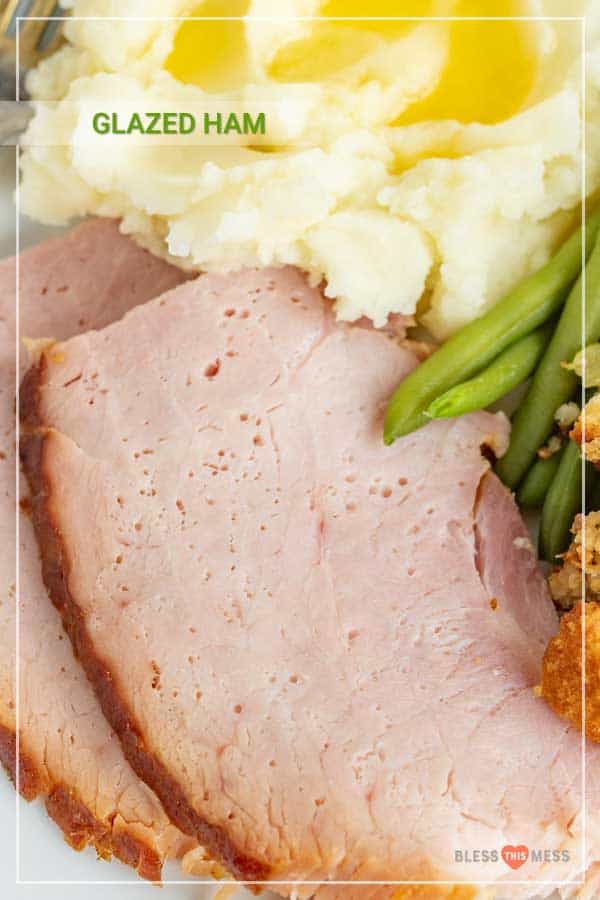 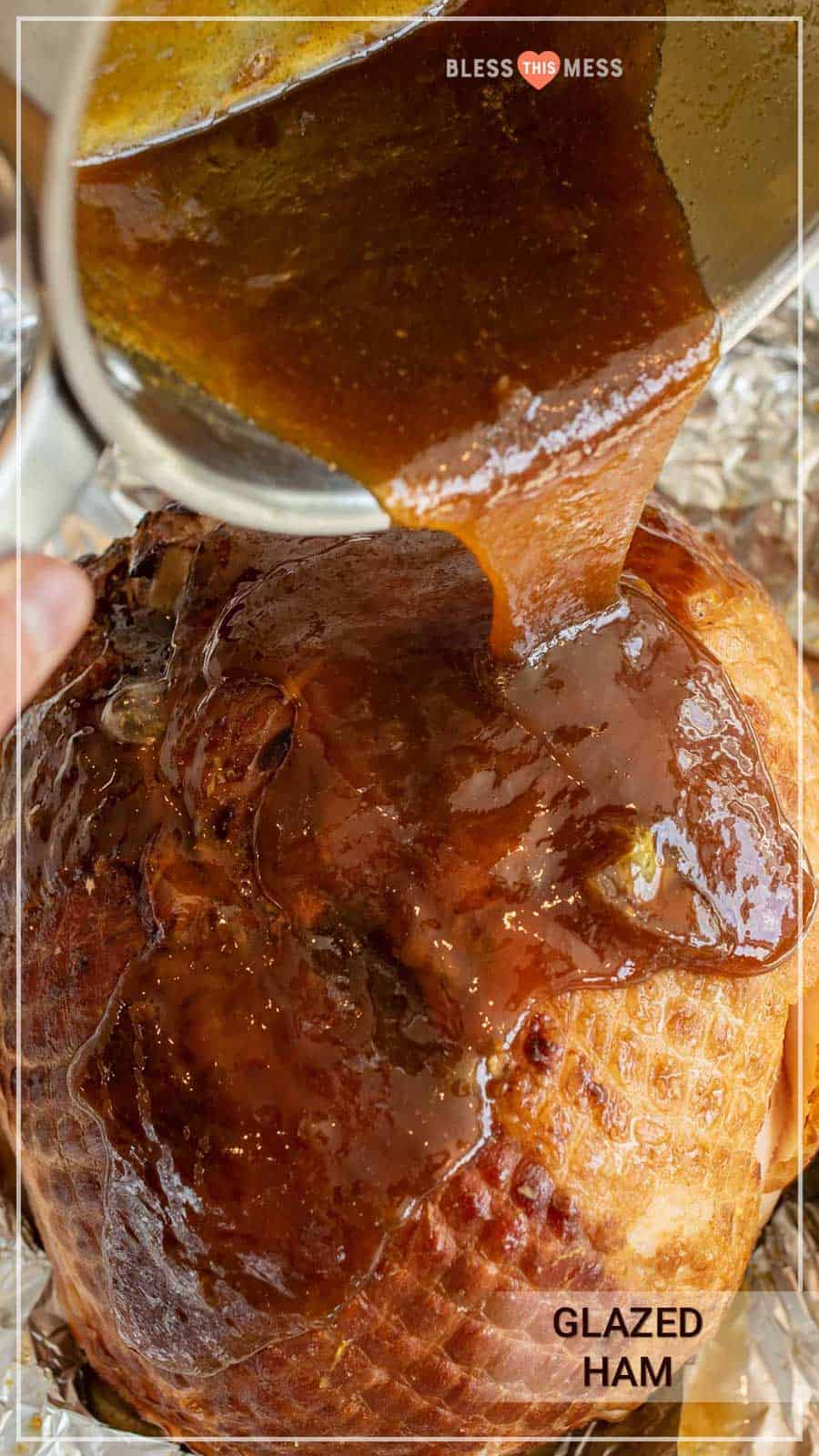 More Thanksgiving recipes you have to try:

Homemade glazed ham is such a delicious and simple holiday dish that's rich, flavorful, moist, and melt-in-your-mouth good. It cooks for a while, but hands-on time is minimal!