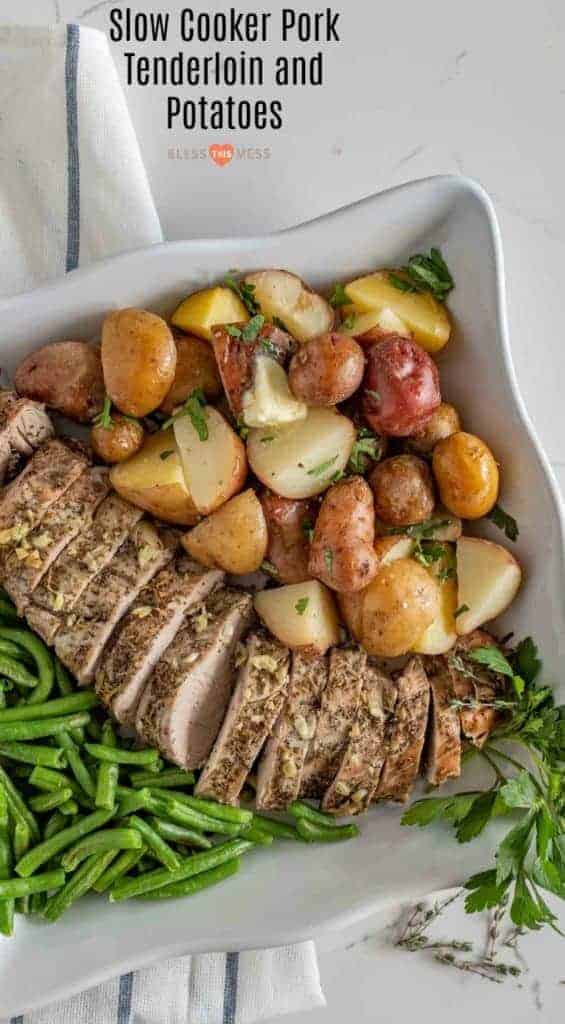 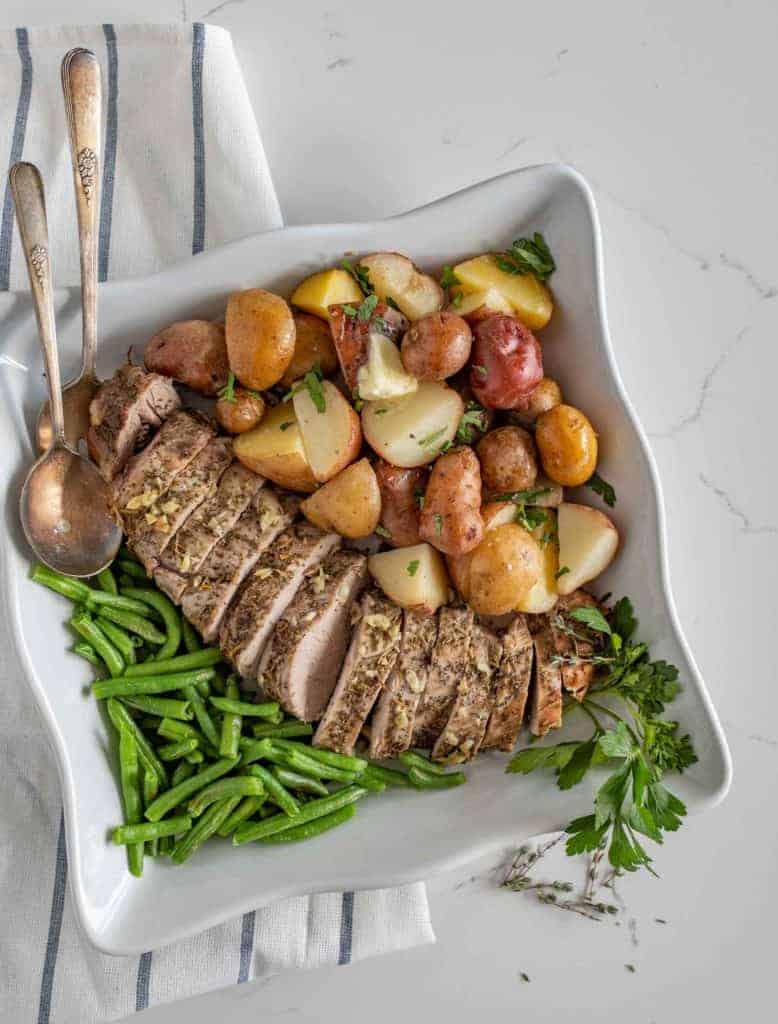 You all know I adore and live for a solid slow cooker recipe, and this one is here to woo and wow you. It’s a simple meal, but don’t let that discourage you from firing up the slow cooker and giving it a try. What it offers in flavor and heartiness makes it seem like a much more complicated recipe than it actually is!

But because it’s SO simple and so satisfying, I’m certain it’ll become one of those meals you make again and again. The cook time is about 4 hours, so it’s perfect to throw into the crockpot right before the kids come clamoring in the door after school. It’s also ideal for Sunday meals -- I let it cook away and work its magic while we go to church, OR I put it on after church and take a nap!

What a dream life, right? Slow cookers are just little miracle workers in that way, and I can’t wait to hear what you think of this miracle meal.

Why I Love This Pork Tenderloin Recipe

I also love Slow Cooker Pork Tenderloin and Potatoes because you cook the potatoes in a foil pouch instead of all together. The slow cooker cooks the potatoes perfectly but they don't get soggy because they aren't sitting in juices. You can use whatever potatoes you like and you can even use sweet potatoes or winter squash; they all work well. I love that you can cook your main dish pork tenderloin and the side dish at the same time. I just added some green beans and frozen peaches to the table and we had an easy and well-rounded dinner on the table in no time. Pro Tip: turn the leftover juices into gravy! Directions in the recipe notes. 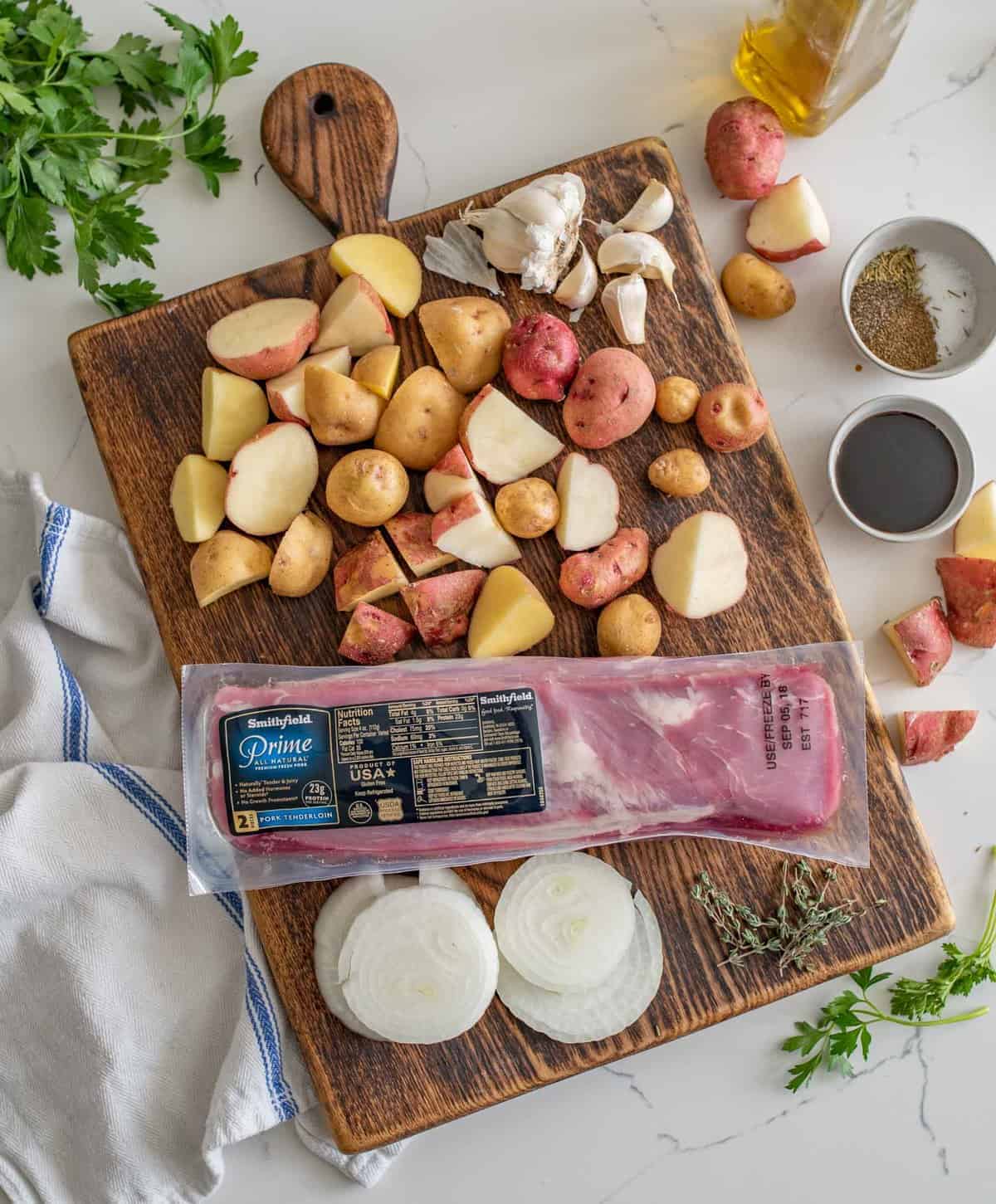 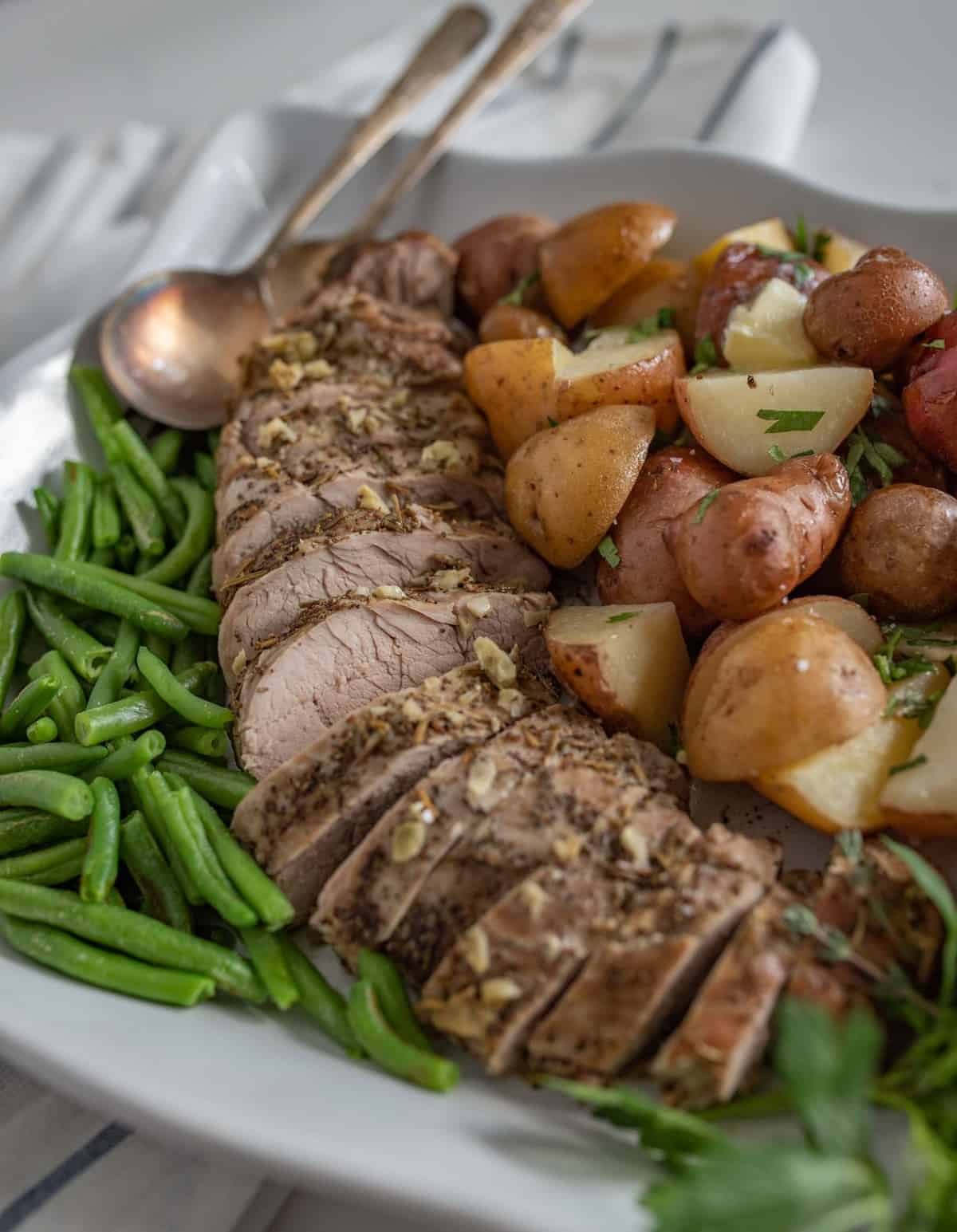 Do you put water in a slow cooker with pork?

For this recipe, you don’t need water or broth of any kind for the pork. All you’ll need is a few seasonings, some soy sauce, and some Worcestershire sauce. Some recipes do call for more liquid for extra-moist meat, but this recipe yields very tender and moist meat without all of that!

When should I put potatoes in a slow cooker?

I add the potatoes right after I place the onion and tenderloin in the crockpot. Put the onions and meat on one side, and then put your tightly sealed foil packet filled with chopped potatoes and some butter on the other side before cooking on low for about 4 hours.

What is the difference between pork loin and pork tenderloin?

Pork tenderloin and loin are two different parts of the animal. Tenderloin is thinner and smaller, and yields a leaner cut of meat, while loin is wide enough to cut steak-like piece of it. You cook them a lot differently, too, since they’re much different sizes and thickness. Make sure you snag a tenderloin for this recipe!

Can you cook pork in a slow cooker without liquid?

I always think you should add at least a little bit of liquid since the main idea behind slow cookers is to cook the meat for a low and slow period of time. Without any additional liquid, there’s a higher chance of the meat drying out, which nobody wants. A few tablespoons of Worcestershire and soy sauce are what I use in this recipe to add some nice moisture and flavor! 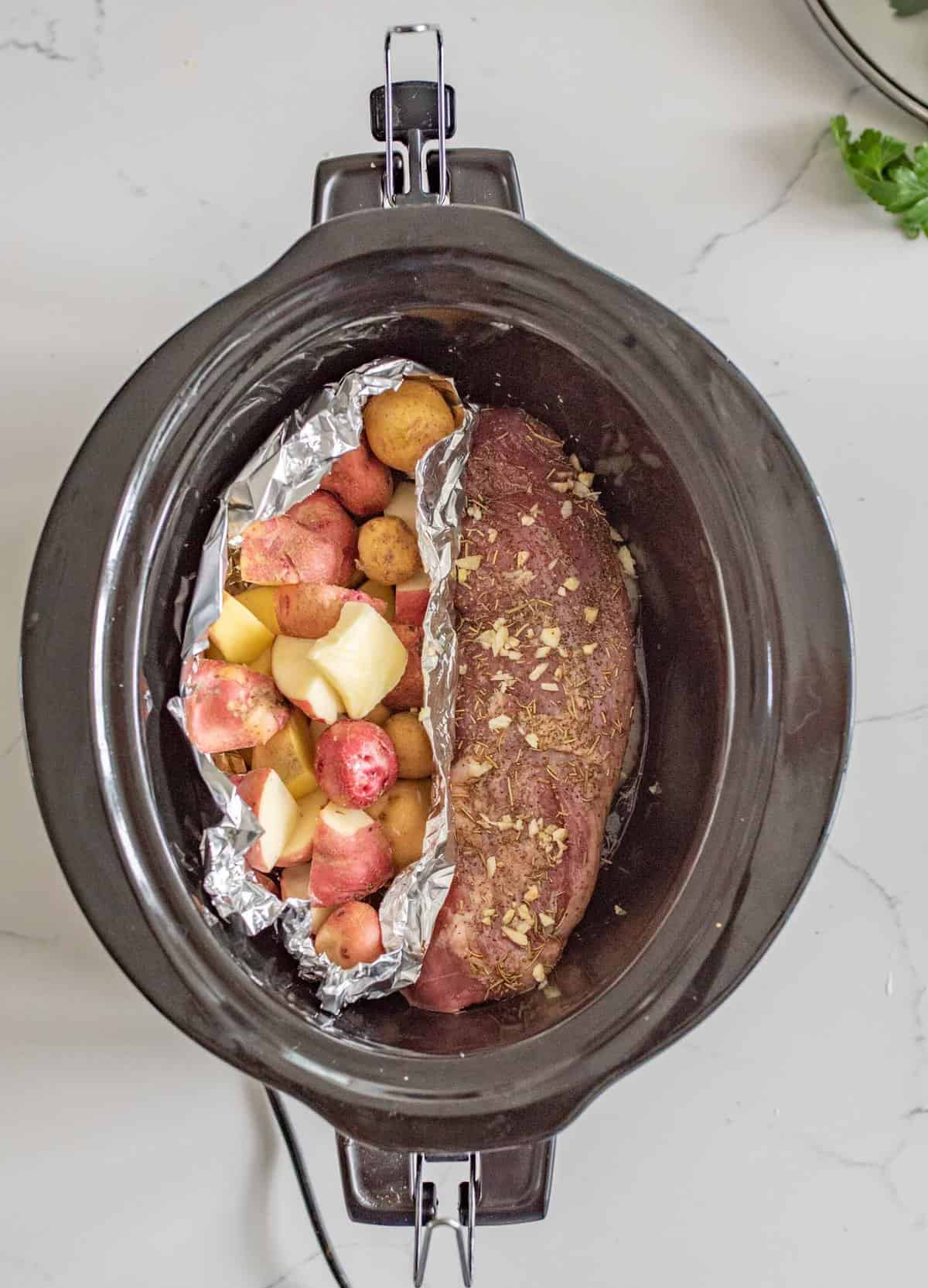 Long live the ease of a slow cooker, cooking the side and main at the same time, and delicious high quality pork that is the star of the show!

Sides that go great with pork and potatoes:

This post was originally published in 2018 and has been updated and rephotographed in July 2019.

This easy slow cooker pork and potato recipe is one of my favorite slow cooker meals to throw in the crock pot at lunch and forget about it until dinner. And I LOVE that the potatoes cook right along with the meat but the flavors stay separate. 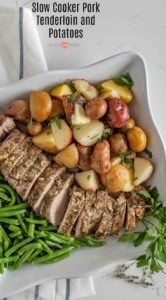 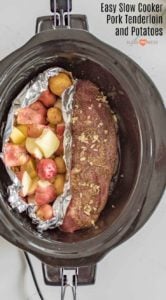