Prepping the Chickens for Winter + a video

We spent the bulk of a Saturday in the garden preparing the chickens for winter. We normally move their coop and run around once a week so the hens have fresh grass under them (I have two of each coop/run combo, 4 hens in one, 3 in the other, and Roostio the Rooster just roams free around the garden). When winter comes though moving them around gets a lot harder to do and the grass isn’t there anyways. So we decided we’d stick them right in the middle of the garden (which finally had a hard freeze and died last week). They’ll stay there all winter and I’ll add clean hay as needed for bedding and for them to scratch around in; then when the spring comes we’ll move them off and till all of their litter right into the soil. We winterized by running some electricity to them to keep a light on them a little (something I’ve never done). We also stacked hay bales around their runs to protect from wind and snow and put some clear plastic over the tops to help keep moisture and wind out. We got the hay for free from a friend and the plastic is just trash we salvaged from the grocery and hardware store.

I wanted to make a fun time lapse video of our Saturday for you to see our work. I had just such grand plans for this video. I read a lot about it, I downloaded an app, and I really tried to do some homework on this one. Video is super new to me but a goal I have for 2016, so I thought that this would be a simple place to start. Boy was I wrong. After I got a tripod all set up and rolling I just assumed it was working. After lunch Paul knocked the whole tripod over and broke the piece that attached to my phone/camera. My phone had died sometime before that though and so the file didn’t save properly. When the morning was over, all I had to show for my good intentions was a broken tripods and a corrupt MP4 file. Thomas knew how much I had wanted it to work though so he spent over an hour trying to restore the file. He’s a total wizard at that kind of thing though and got a big chunk of the video to work!

It’s not perfect but after all that effort I wanted to go ahead and post the video. After hours worth or recording and another hour trying to fix the file you have yourself 15 short seconds of fun.

I’ll be trying that again, but for a first time I sure liked how it turned out.

We ran power to the coops and put a light with a timer in both coops in an effort to encourage egg production a little this winter. Plus the light bulb gives off some heat. We also dug a little hole out and put 4 thick boards around it, placed a light bulb (in a little metal cover) in the hole, and then put their 5-gallon waters that we made on top of that. This lightbulb is plugged into some neat little thing that has a thermostat on it. When the temperature is cold, the power is on which means the light bulb is on, producing heat to keep the water from freezing. When it warms up enough outside the power goes off so that the light bulb doesn’t run unnecessarily. It was hard to find normal incandescent light bulbs that produce heat though, but we found a few and stocked up so that we can have them for this type of project in the future. Having the light bulbs produce a little heat is a convenient thing now and again.

In the picture below you can see their waterer, the light bulb is in between the boards on the bottom. 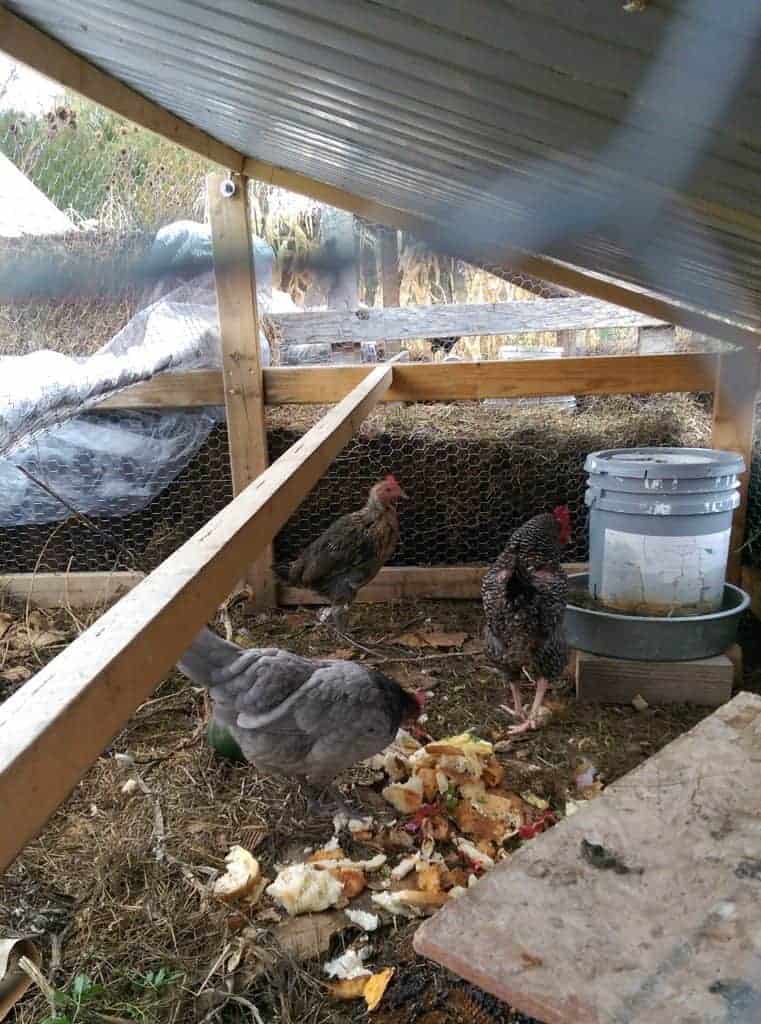 I thought the chickens would be really happy but I haven’t gotten a single eggs in almost 2 weeks. Not one! I chalked it up to cold weather, shorter days, and a few hens molting, but it’s now been so long since I’ve gotten any eggs I’m starting to wonder what is going on. I’m not sure if something is bothering them during the day and they are too stressed out or what. I really need to spend some time over there and try to see what is going on, but it’s just so cold and a newborn doesn’t love hanging out in the snow much.

It’s always disappointing to open up their coops and find empty nesting boxes. 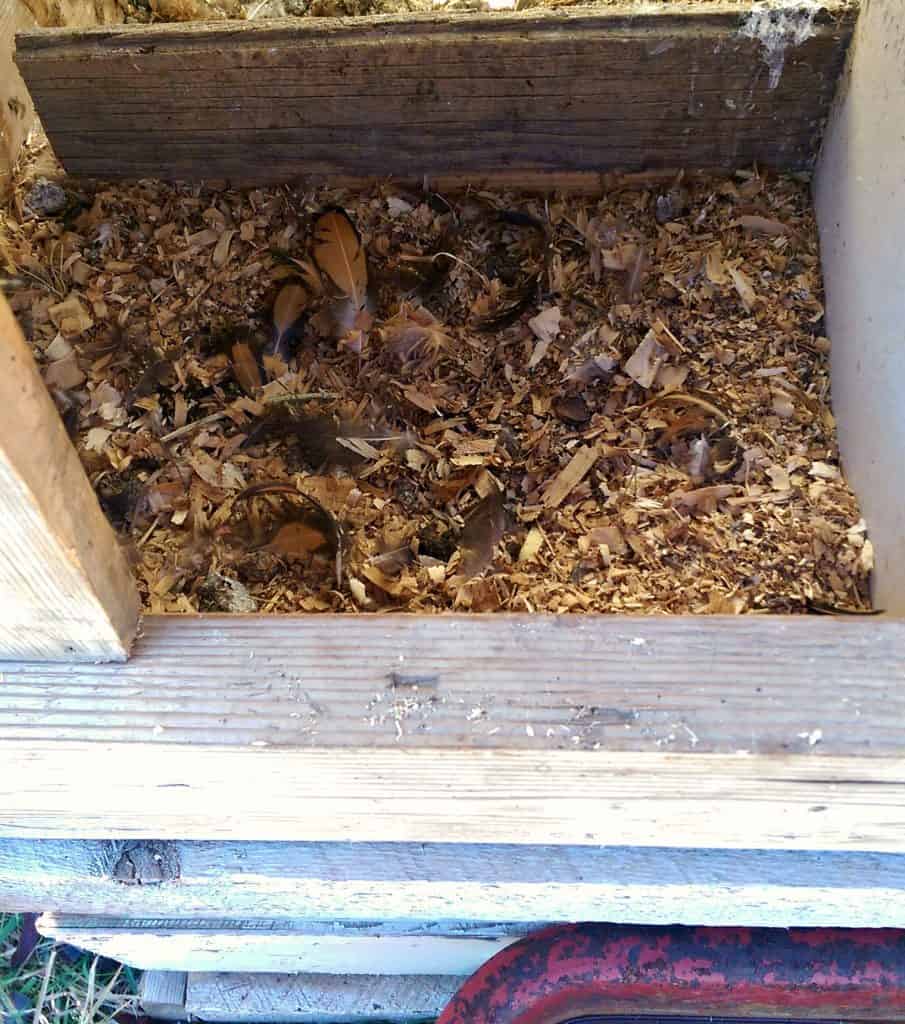 So for now I have some really expensive pets that aren’t giving much back in return and I’m having to settle for store-bought eggs which are just not the same.

It’s a mystery indeed! I was sure they’d be happy as clams once they got settled into their new warm homes, but so far, no luck.

And I’m still not sure what to do with Roostio this winter. I think I might find him a little dog house to snuggle up in overnight. I didn’t think we’d keep him around this long but he’s proving himself a good rooster.

There you have a chicken update and a goofy little video. Enjoy!

I hope they start laying again soon! Always throws me when you can’t figure things out… Good luck!

I so agree! Such a mystery and I don’t like that! LOL

haha, I love the video! I’m excited to see more. I hope your chickens start laying again soon, eggs are crazy expensive right now! Nate and I were talking about getting chickens in the spring, but I think we’re leaning towards meat rabbits. I’m super excited!

Could be the chickens are molting and will lay again when they are done. Can take 6-8 weeks.

The thing is only about hald are molting. I have a bunch of different ages for chickens too so they shouldn’t all be too old or too young either. I’m at a total loss on the why!