Spring is in the air and I thought I'd show you what we are up to in the farm and garden area of life.

All of our trees budded so nicely! Our property is exactly next to my in-laws and they share the same lane, so I've been driving past this neglected orchard for almost 10 years now. We've been wanting to buy it and talking to the owner for at least the last three, so while we were around we would turn on the water and water the trees once in a while but I never really went over there and I didn't pay much attention to what was growing. Last fall was the first fruit season that we owned the property and there were tons of apples, so I knew we had apples. This spring though has made us realize that we also have a pear, peach, cherry, and two plum trees! Everything needs a heavy pruning, which we didn't get to, but they bloomed none the less.

I love that the trees have an identity through and through. Peach blossoms are so very peach and the wood even has peach hues in it. 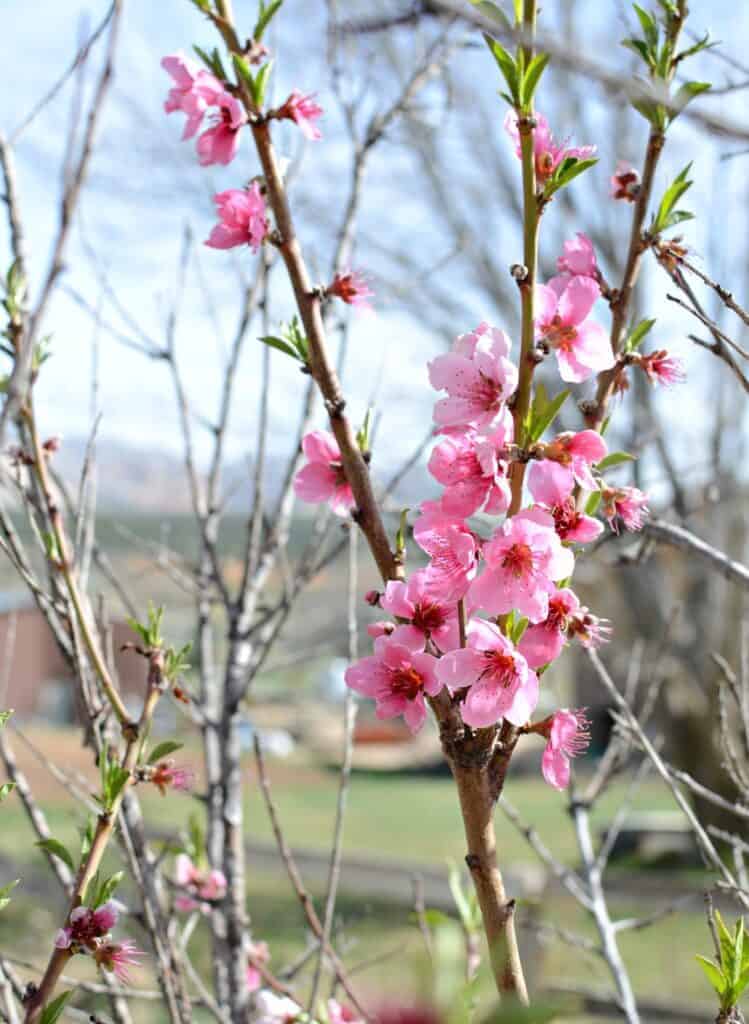 This is a "Moonglow" pear tree in full blossom. 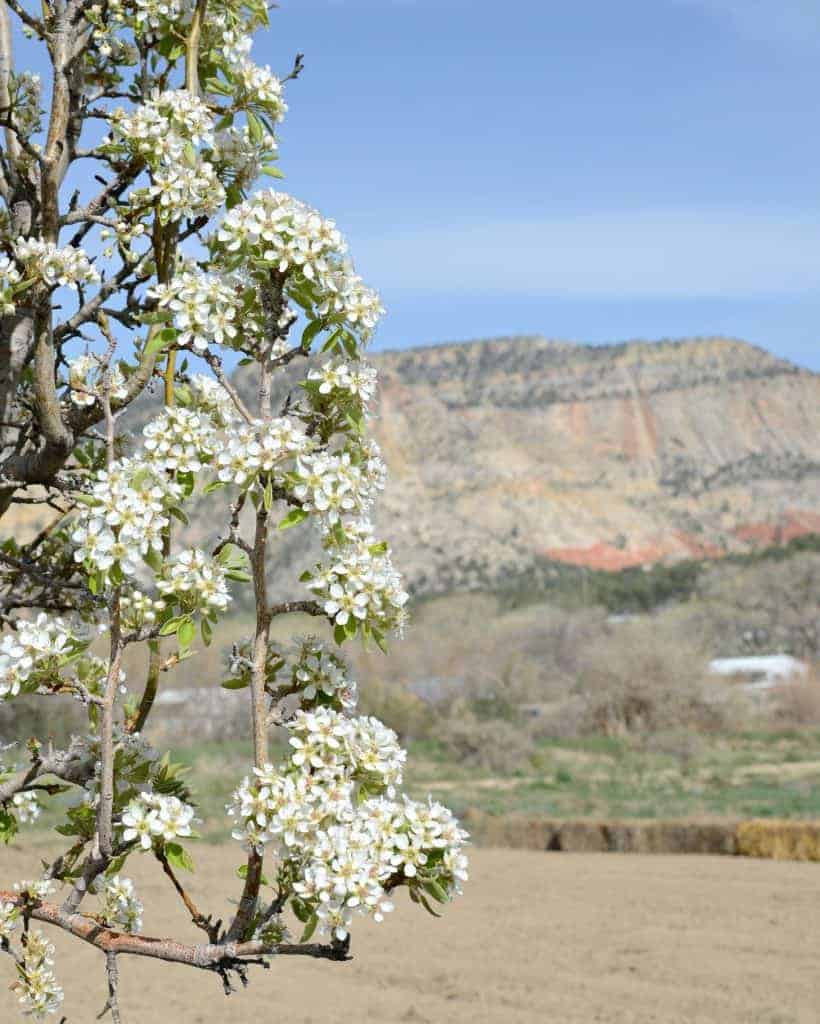 The bad part about living in the high desert is that it gets warm, all the blossoms come out, and then we'll get a clod snap at night and it freezes the blossoms. This already happened late last week. The apples haven't all bloomed yet, so we are still holding out for them, but we aren't expecting much of anything from the other varieties of fruit. We have quite a few dead trees in the orchard and I think we'll replace them with some hardier, late-blooming varieties of peaches and pears (I've been looking at trees that grow well in Canada, ha!) so we'll see if that option gets us peaches more than every 5 or 6 years.

I need to take a different wider lens with me next time, but here's a picture of some of the orchard. This is at the top of the property, then it will be our front yard/garden, a (hopefully) circle drive, our house, and then the alfalfa fields will be our "back yard", ending at the creek at the bottom of the property. The orchard will be a nice thing to look over while sitting on the front porch in the future. 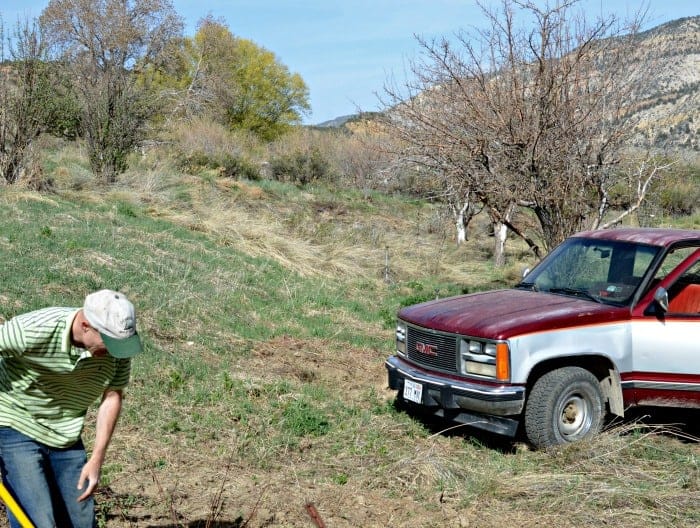 We spent a day last week clearing out unwanted elms, willows, and sage brush that had gotten very overgrown in the last 15 years. It was nice to feel like we were working on something. Thomas hooked up a metal cable/rope thing around the bottom of the plants and then I would drive the backhoe to pull them out by their roots. It was my first time driving a backhoe and it was pretty fun. The baby liked it too. 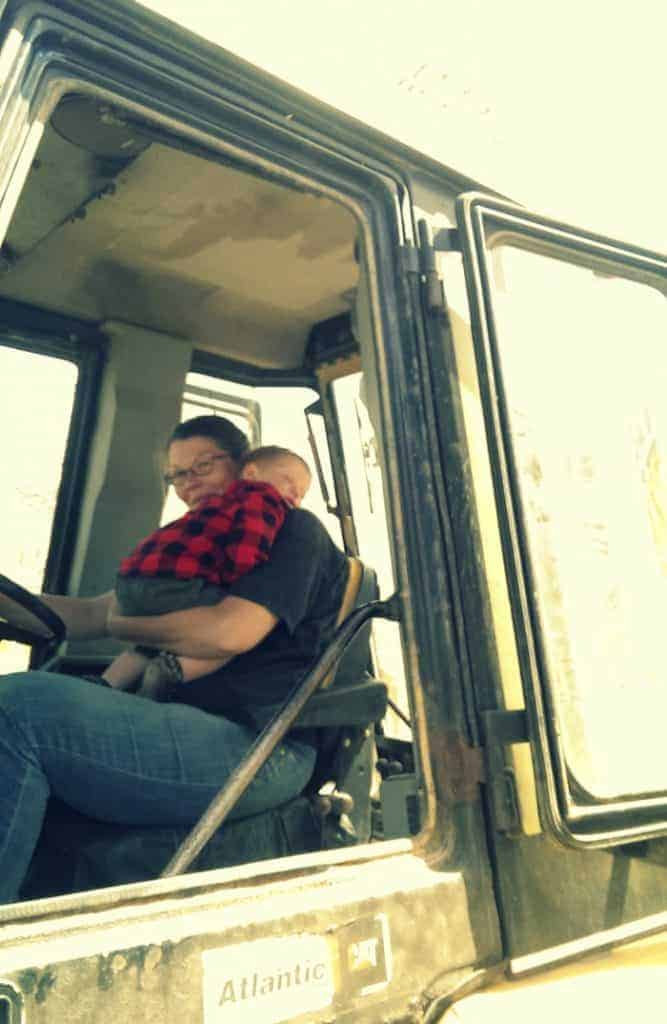 We also plowed and tilled a new garden spot. It's not quiet as big as last years, but I'm not planning on doing the farmer's market this year (since I'm due with baby #5 ANOTHER BOY! in late July). The only thing I really need to plant is green beans to can. I didn't can any last year and we are just about out. I'm good on tomatoes and my mother-in-law always grows more corn than she can eat, so the garden is mostly just for eating and enjoying this year. Here's some of what I have planned. 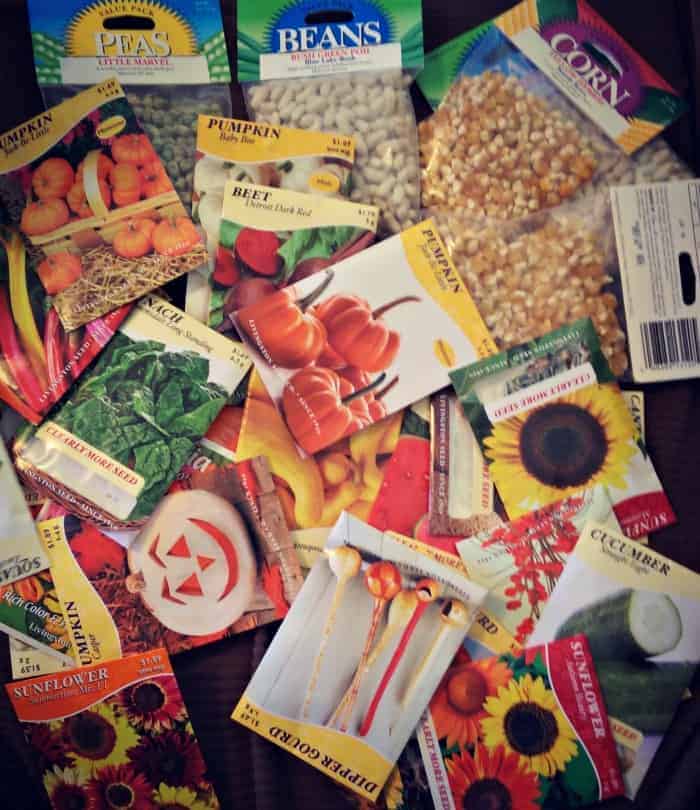 I had such an issue with weeds last year that I'm trying some new things this year like laying down cardboard and then old hay on top of that. I have to keep the hay wet though or the wind (which is really strong here) picks up the cardboard and makes a mess of my hard work. It's kind of a pain to water the rows everyday, but I think once it starts to breakdown a bit it will work better. Time will tell. And I can't wait to live here for gardening purposes. It's not convient to garden where you don't live. I feel like I go over and work but I never get to just go out and enjoy it or see it out  my window. I'm really anxious to live where my garden is.

I think I'll also try a row with just old hay, some with nothing, and if I can find a chipper, a row with small wood mulch. Our neighbor is also a casket/cabinet maker, so I might also try a row with fine sawdust. The goal is to keep on top of the weeds while using things that can be tilled in and will compost over the winter, adding to the soil. I'll let you know how it works. The hay and cardboard were all given to me, so I'm not out anything besides time if I don't like how it worked out. 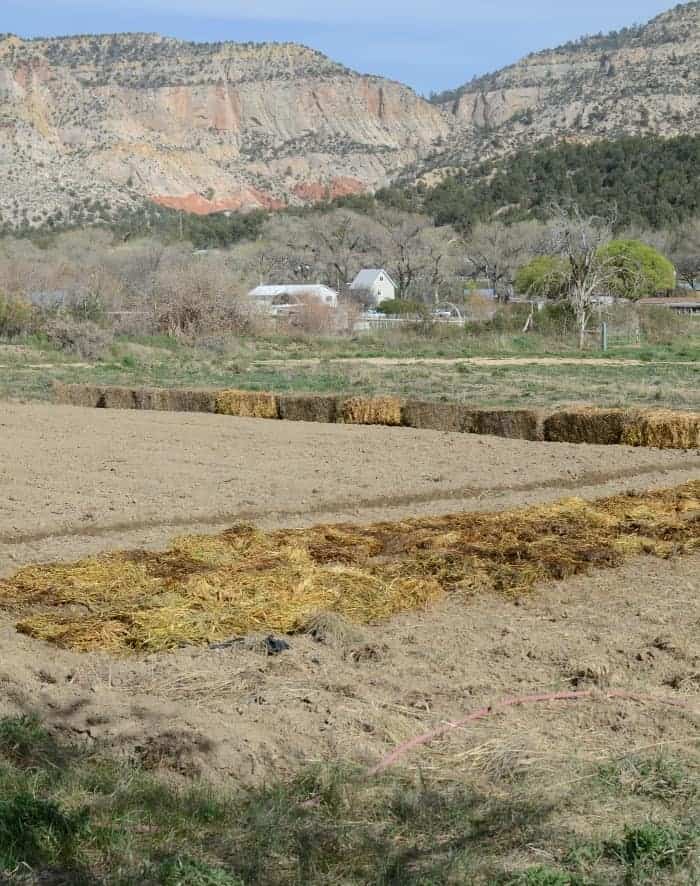 So far I planted 100 red onion sets, 100 white onion sets, a whole row of shell peas, and a row of carrots, beets, spinach, and Swiss chard. I planted a week ago today and nothing has popped through just yet, though I look with eager anticipation daily! We irrigate here, so I send water down those little trenches and the seeds are planted about half way up the "furrow" walls. The water soaks up into the dirt around the furrow and your plants are watered. I like irrigating because we don't rely so heavily on what the sky is going to provide (we assume it'll be just about nothing). In Indiana I remember a few years that were drought conditions as a kid and gardens just where not set up there to irrigate so lots of times they failed. We do get low on irrigation water from the creek and have to really conserve, but I generally always have access to water. 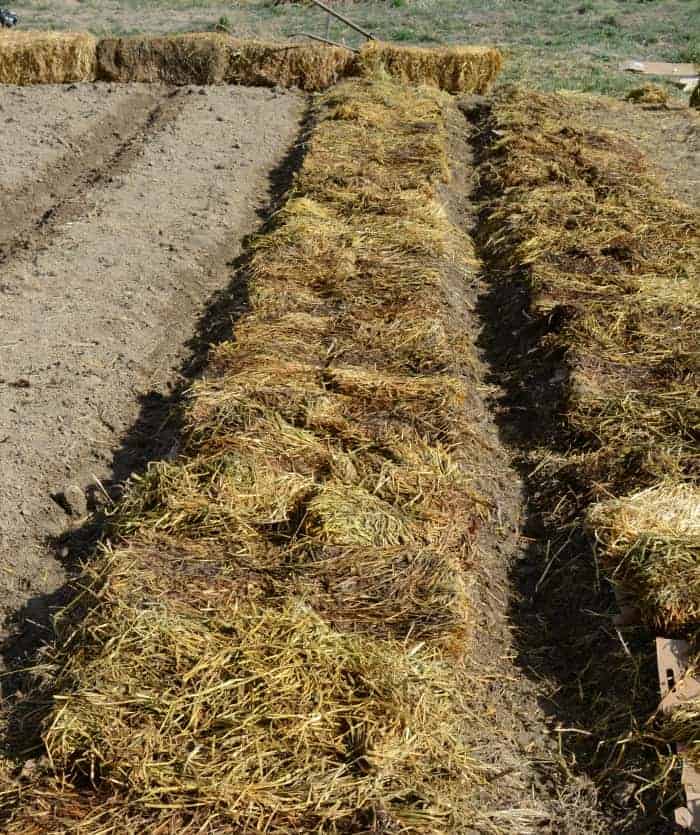 I also made a small make-shift "perennial" raised bed on the edge of the property. I moved some of my perennial herbs and rhubarb into it from The Shanty and I ordered a bunch of strawberry plants from the Indiana Berry Company to plant it in. It won't be the forever home for these things, but they'll be nice and safe there for the next few years as we continue to get settled and eventually build our house.

The only that is missing is my hens and I hope to move them over the next time Thomas has a day off. I did decide to incubate a second set of eggs and was so disappointed when I candled them on day 10; they looked like nothing was growing. I just left them in the incubator though. Yesterday (day 18 or so) I decided to throw them out while I was cleaning but thought maybe if I broke one open I'd really know they weren't growing. So I went outside and cracked open an egg and it was full of life. I committed chicken abortion. I was so shocked I gasped and then felt horrible. I accidentally killed a growing chick but now I know that maybe, just maybe, the other eggs are working. If that's the case I should have chicks this Saturday! I obviously have no idea what to look for when candling either, so that's something I'm going to have to have someone who does know their stuff show me in person. 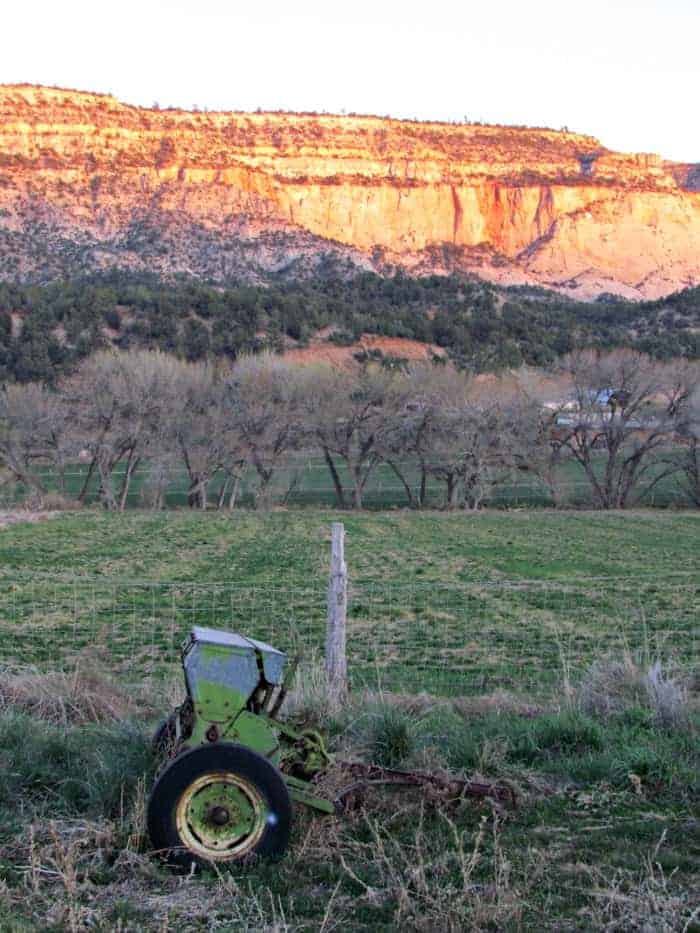 I have so much impatience and anxiety about building a house, when it will happen, and that it's not ever going to happen. Thomas is still working at least 50 hours a week at the hardware store plus he works a second 20 hour a week job doing Engineering to pay our bills. This leaves little to no time to get other things done. He's been working full-time with his extra Engineering job on the side for FIVE years this month and we are both so tired of it. He's burnt out and his wife is tired of living in dumpy houses waiting for her own. The store has been open for about 8 months now but he still has a list of things he'd like to get done before he feels like he can cut back on his hours. I'm about to have a 5th baby and my hormones don't make me a very happy or kind person some days. So my current dream is to strike it rich blogging and to be able to pay for the house myself. HA! I can dream though can't I?

In other news. We don't know how to heat and cool our house. I'd love to hear what you do and what works for you. Here's the catch- there's no natural gas available here and propane is very expensive. Electricity is a relatively low price but isn't something I necessarily want to depend on 100% and most people here use wood though I don't want to have to deal with that by myself for the next 60 years. We looked into underground heat pumps which sound really neat but the cost of actually getting it crazy high. There's got to be a good option but we have yet to find it.

Thanks for letting me share all of our fun with you!