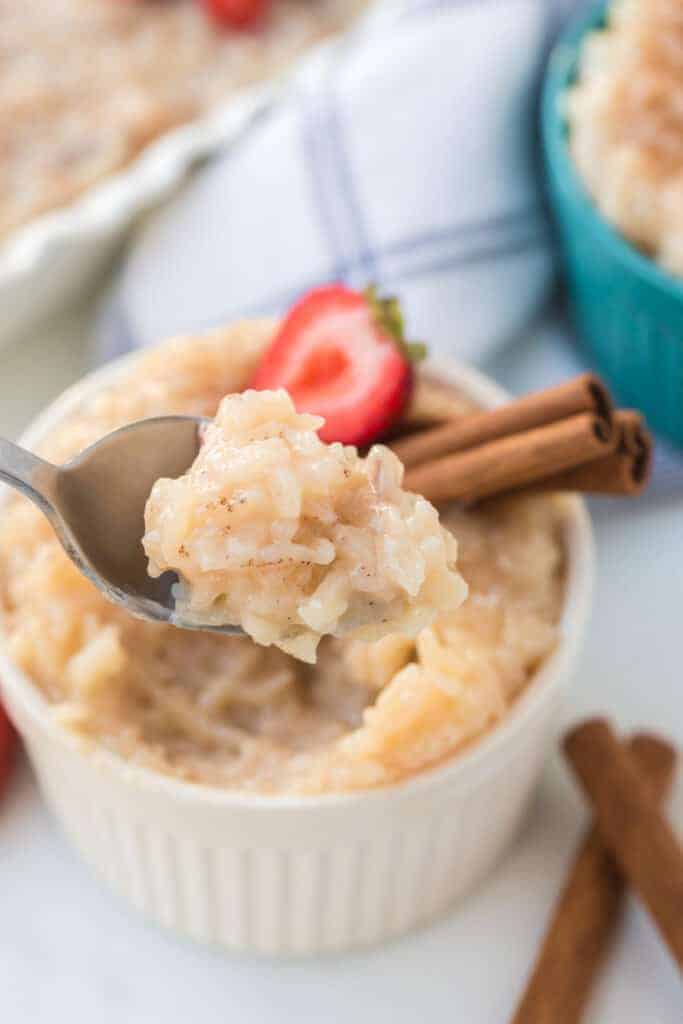 Rice pudding is one of the most delicious and easy desserts, made with warming cinnamon, condensed milk, and sugar to make a creamy, delectable sweet treat!

And it comes together so quickly and easily to make for a perfect dessert when entertaining or even for a simple weeknight sweet after dinner with your family!

Rice pudding is one of those desserts that looks fancy and complicated, but secretly, it's the easiest thing ever to make on your own! I think when we think of pudding, we assume it's going to take forever to make because traditional puddings take a while to set. But this one is ready to eat as soon as it's done cooking, and you'll be happy to dig in right away! Made with cinnamon, condensed milk, rice, and sugar, it has minimal ingredients but the best flavor and texture ever.

I love rice pudding in the chillier months because of the warming cinnamon, and because it's served warm, too! It's a cozy, comforting dessert that just feels like home. Anyone can make it, whether you love to bake or prefer to not measure ingredients just so -- either way, this rice pudding is impossible to mess up. And if you prefer a less creamy and sweet version, I've used half the milk and sugar before and it still turned out wonderful. Give it a try! You won't be disappointed.

How do you thicken rice pudding?

There are a couple ways to thicken rice pudding! Just letting it cool a bit naturally thickens the pudding because the rice absorbs more of the liquid. Or you can mix in a beaten egg, slowly whisking it in to allow it to cook into the mixture and thicken it up.

Is rice pudding good for your health?

Rice pudding is definitely a healthier alternative to other desserts with more sugar in them. Plus, it has fiber and complex carbs from the rice, which is a win! But you know me -- I'm all about enjoying yourself and eating what you like in moderation.

Homemade rice pudding will keep in your fridge for about 4 days. Pro tip: add fruit on top for a delicious breakfast or snack!

Can you freeze rice pudding?

Store rice pudding in a freezer-safe, airtight container for up to 3 months. But for this one, I always recommend to eat it sooner. The sooner you eat it, the better it tastes in my opinion!

Rice pudding is one of the most delicious desserts, made with warming cinnamon, condensed milk, and sugar to make a creamy, delectable sweet treat!

This post was originally published in 2010, and has been updated and rephotographed in December 2019.

Homemade rice pudding is such a tasty treat and will warm you up from the insider out with it's creamy, warm, cinnamon-filled flavors! You'll love how easy it is to make, too.