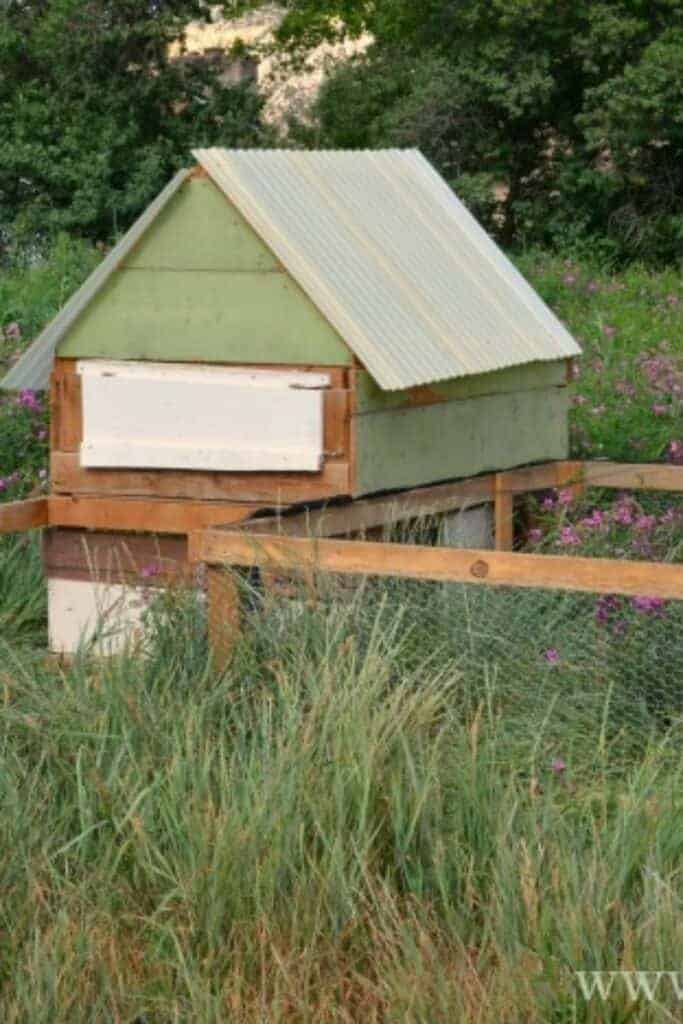 Last Saturday was awesomely productive and we got this puppy built, moved to the Shanty, and put all of the hens and chicks together. I present to you:  DIY portable chicken run. 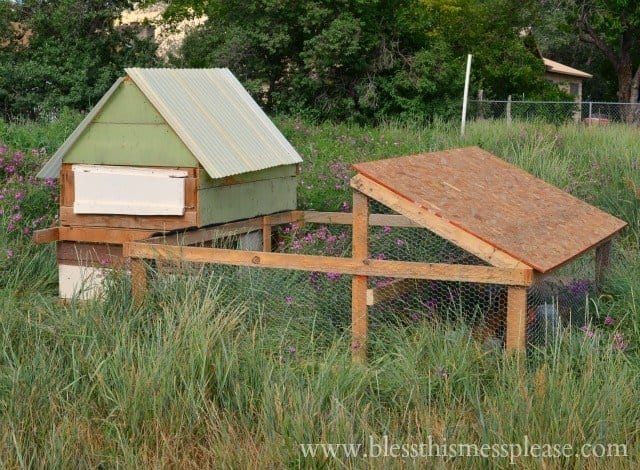 The coop to the left I built last year when I got my very first chickens (DIY Chicken Coop Tour Here) and the the "run" or the part they can come out into the grass and play in is what we built new. For the last year I've just had my hens roam free through our yard. Dogs killed the majority of my birds last winter and I've only had three hens until this spring when I got new chicks. Having three hens in our new little yard is one things but having 11 total would be too many. So we decided to move them all to the Shanty (our garden property). Since we don't live on the property I didn't want to have to go over every night to close their coop; skunks are a big problem here and love to kill chickens. I also didn't want to have the hens in my garden; they are ruthless to vegetables. So making a run that we can move around in conjunction with their coop is the best option for them at the moment.

Here's another look at the cuteness! 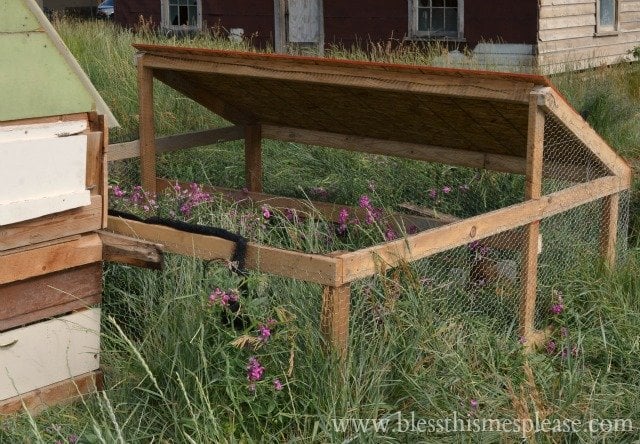 I have to give a big shout out to Ryobi Tools for helping out with this project. I have SO many things that I want to get done that require a little more than elbow grease. Husband's tools are still at our remodel and he doesn't love me stealing them anyhow (weird...). I had a connection with Ryobi from a conference I went to in April, so I sent her an email asking if could work together to make a little DIY magic. They have been amazing to work with! They sent me a huge bag of my very own tools that included a circular saw, a reciprocating saw, a drill, an impact driver (amazing!), a flashlight, and this other all-purpose tool that I still need to figure out. (You can see the tool kit they sent here on Home Depot's website.)

I told them in exchange for the tools I'd tell you all when I used them and about something pretty cool that they have going on. One things I like about Ryobi is that it's so much more than a tool company. They have worked really hard to put together a website/community called Ryobi Nation. Ryobi Nation is essentially pinterest for the DIYer but way more interactive. If you click on this link or on the image below then it will zip you over to Ryobi Nation. 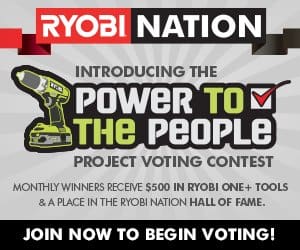 Ryobi Nation is a community where people have uploaded pictures and some details about projects they've been working on. By signing up you can vote for projects and leave comments (or ask questions!). And there are prizes every week based on voting. Even if you aren't submitting your own projects it's an amazing source of inspiration. I've seen everything from chicken coops to rustic benches and DIY Star Wars beds to bead-board picture frames. People are so creative and handy! Just popping on the site makes my "wanna-make-that" list grow by at least 3 things. It's a super fun site and I'm pretty excited to get some of my projects uploaded too.

Thanks for the tools Ryobi. This wouldn't have gotten done without you.

Now lets take a closer look at that run. We decided to just make it an 8 foot by 8 foot square so that there wasn't more cutting than necessary for us (2x4's and the plywood all came in 8 foot lengths...). Space wasn't an issue so that size didn't matter; it just needed to be light enough that Thomas and I could pick it up and move it once the chickens had made a mess of things and stomped all the grass day. Surprisingly we need to move it about once a week. Chickens are pretty yucky.

Hey look! It's me, my pregnant belly, and my fancy tools 🙂 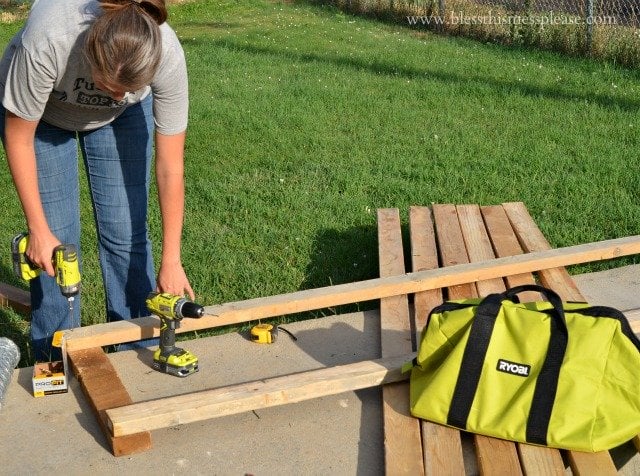 We built the coop at our house and then loaded it on to the truck to drive it the 2 blocks to the Shanty. It was pretty funny to drive with it in the truck. We used standard chicken wire on the edges and then enclosed the top with netting used to keep birds out of fruit trees. The netting is light and flexible so it allows for enough headroom for the hens if they want to perch on the 2x4 that we have there in the middle.

We just left a hole in one end the side of the run and then lined it up with the door of the coop when it's all together. Easy. The run definitely isn't light, but it's not too hard for two able-bodies people to slide to a fresh patch of grass. It is lighter than my coop though that thing is beastly portable! 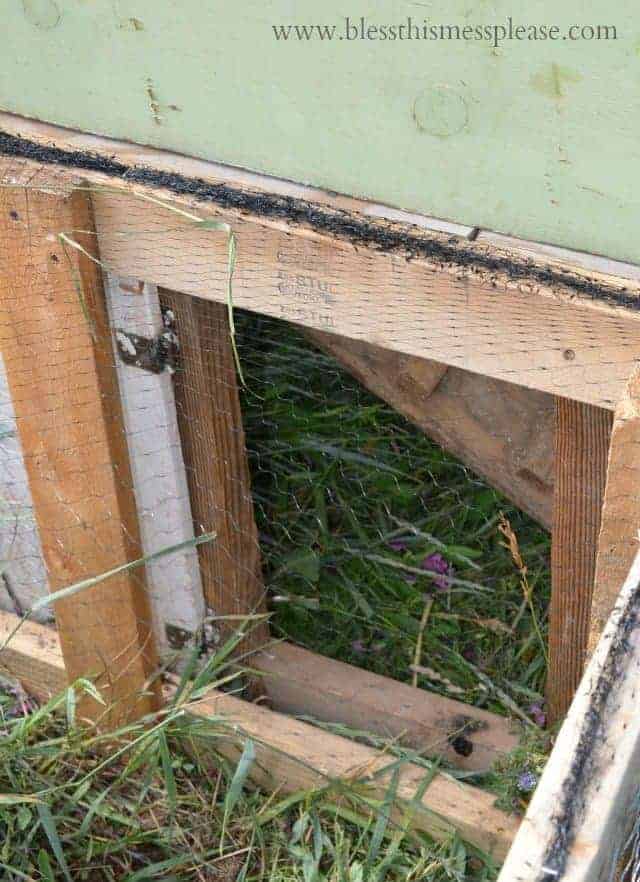 Here are the big girls chillin'. Like I said they don't love it; it's still a cage to them. But they are slowly getting used to it. I made a 5-gallon chicken feeder and a water too that I'll show you how to do later in the week. 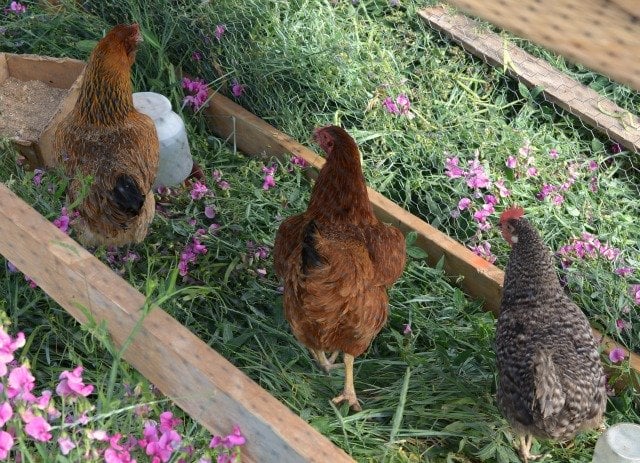 The board on the top provides shade (chickens don't like direct sun unless it's really cold), protection from a bit of rain, and it is hinged so it is how I change their food and water or throw in food scraps. Not only did Ryobi help, but so did my husband. I was planning on just getting it done on my own and when he offered to help I sure took it. Marrying an Engineer has its perks... he's so good at things like this and it was so much easier to have another set of hands.

Well there you have it! A new set up for the hens and chicks and a sweet new website to get inspired by. Thanks Ryobi!