I've wanted chickens for years and my dream came true this week! I took the kids down to IFA this week to go chick shopping. Even if you aren't interested in buying chicks, you should take your kids to IFA to visit the chicks. The chicks make a lot of cute noises and stick their heads out of the crates to eat and drink. We went last year a few times just to visit the animals. In a few weeks they will have bunnies for sale in the store, too. The people have always been extremely kind and will let the kids get a bunny out to pet.
Speaking of kind, while we were there buying chicks the IFA workers gave the kids a box of Peeps to snack on. A chick snack for some chick shoppers. (And check out the cart. The carts are awesome! They're made to carry big bags of assorted animal food but my kids just like to ride on them.) 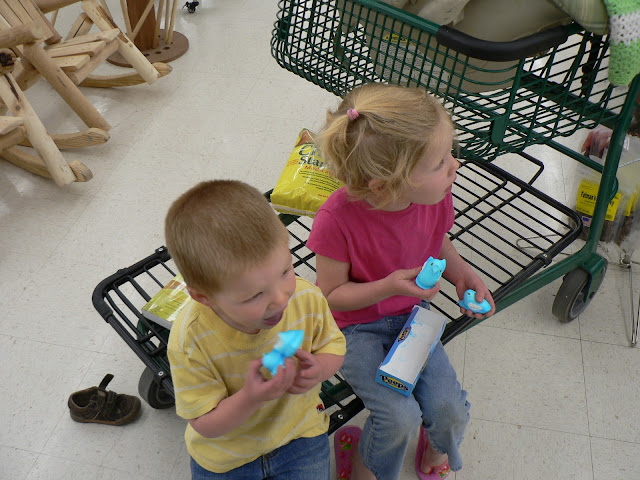 The chicks are in these stacked crates. There can be hundreds of chicks in the store at a time; their busy noises are adorable. All the kids in the store came to look and I noticed that none of the adults could resist stopping to take a peek either. Seriously, take your kids to see them; it's so much fun! 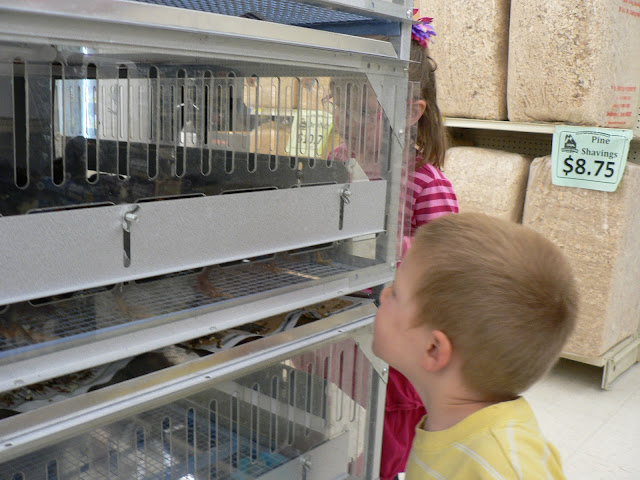 Chicks sticking their heads out to get a drink. 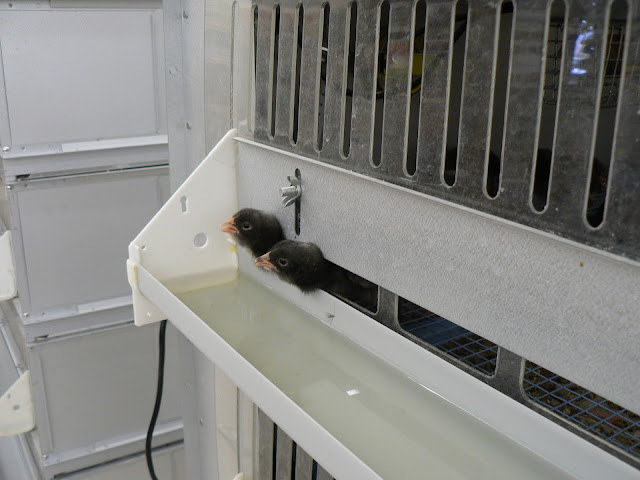 I told the lady helping me I wanted one of each kind of chick they had. I am most excited about the Ameraucana breed which have blue or green eggs. They had a big poster of the chicken breeds so I took a picture of the types I bought so that I could remember. 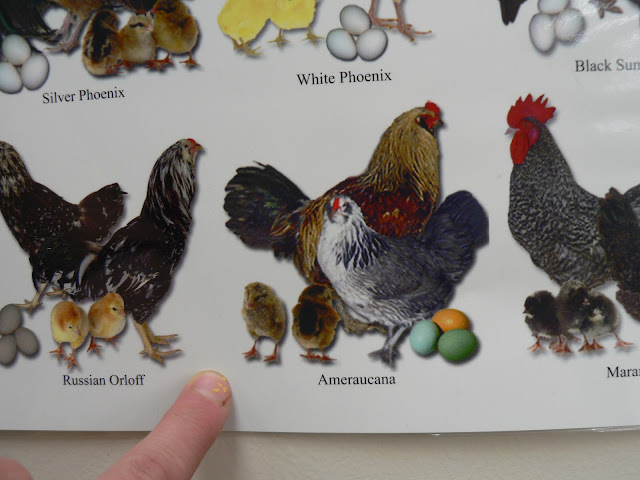 This chicken coop was priced at $489. We'll see what I can whip up. No way in Hades are the birds getting a nicer house than me :). 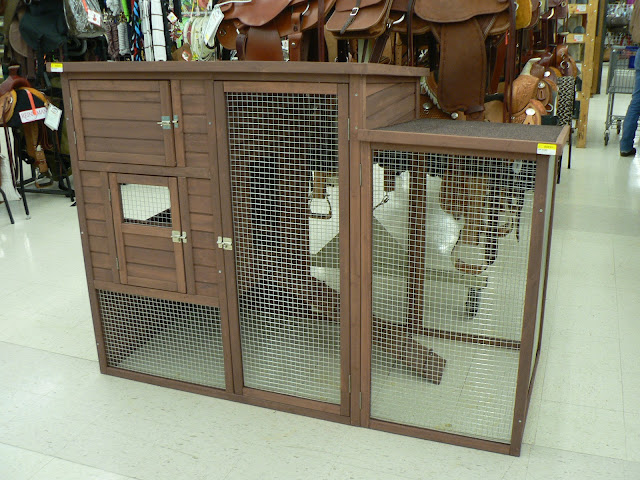 Here are three of the gals we brought home! 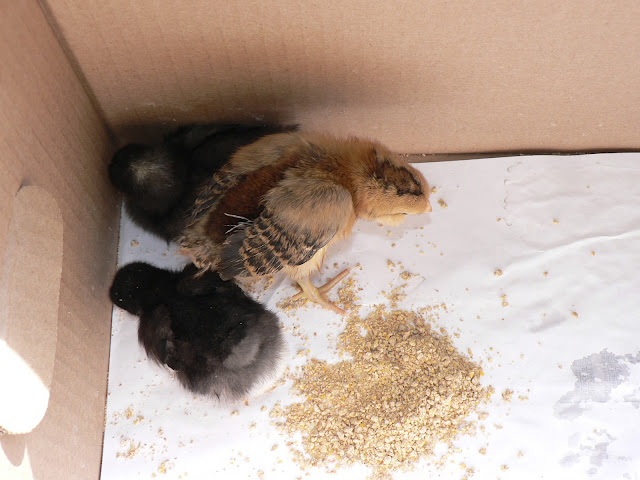 Here's a story for you. I had the woman at IFA just get me one of each breed. The chicks are hard to catch because you have to stick your hand in the crate and they run all over squawking their heads off. She was busy catching the birds while I was getting a feeder, watering thing, and some chick food. I didn't really pay attention to the birds she picked out. She put them in boxes that looked like the old Happy Meal boxes that close at the top over the handles. My kids were running around and I was trying to get what I needed, so I didn't even look at the chicks she picked out.

I got home and we open up the boxes and 2 of the chicks have something all over their bums. I didn't even know what it was. I finally realized that it was a huge (large shooter marble-sized) clump of poop! It was disgusting. Things like this creep me out. I want to be a farmer-woman but I don't really want to be a farmer-woman. Anyhow, I knew this couldn't be good. I was sure that their bowels were blocked which would kill them. So I manned up and took care of business. I held their little tooshie in warm water and cleaned them off with a cotton swab. It was awful; I was dry heaving part of the time. I have the weakest gag reflex.

After all that the two little birds started shaking uncontrollably. One was even sitting on its bum with its legs out and its eyes rolling back in its head. It was dying! I called my egg lady (who I buy fresh eggs from now) and asked her what to do. She said to wrap them up in a warm towel because they were probably cold from the water. I did just that and watched them for hours. It was really very dramatic; our babies were on the verge of death! To make a long story short, after our dramatic afternoon they finally started to get better and are now doing fine. One is even starting to regrow some feathers that she was missing. I do however have to wipe their little bums daily.

I'm sure you are all pretty concerned about this. After a little googling I have discovered that it is a condition called pasty butt (scientific huh). You can read all about it here.

I called Thomas to tell him what a good chicken farmer I had been and he just laughed at me. I am so proud of myself for helping them when part of me just wanted to return them for healthier chicks. 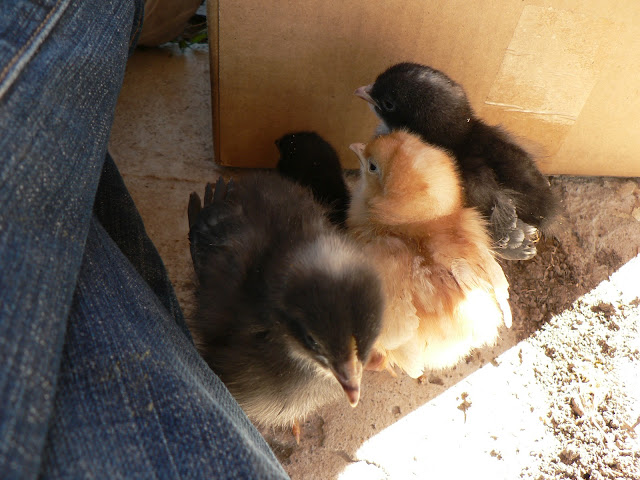 I've read that the more you handle them at this stage the friendlier they will be. So we have been treating them like pets. We get them out and hold them; we took them outside yesterday when it was nice and warm so they could explore a bit. The cats were super interested in them. I let them get close but kept a good eye on them. The chicks will even fall asleep when you hold them and pet their heads. It's beyond cute. 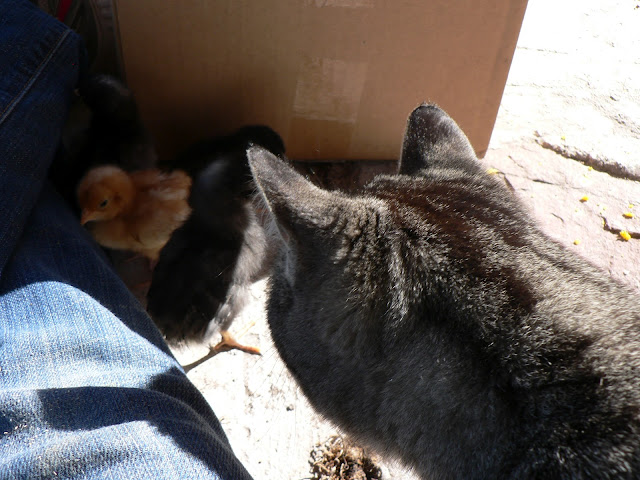 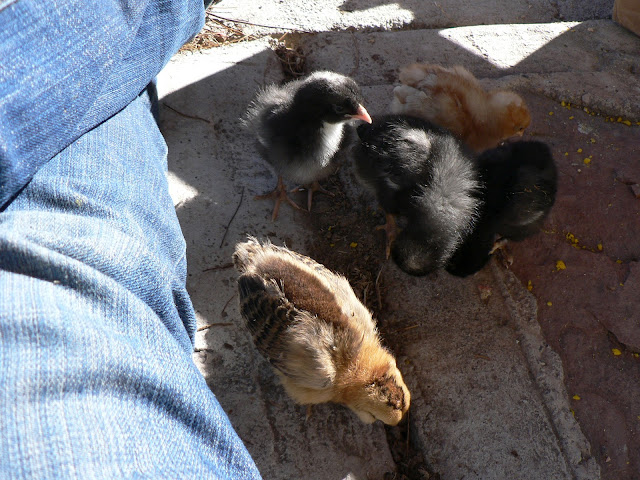 Notice the cat creeper in this picture: 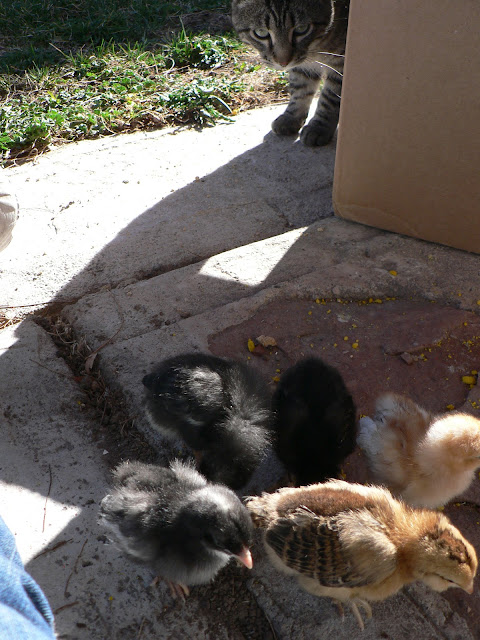 I plan on letting the ladies roam the yard during the day when they are bigger and they'll stay in a coop at night. One reason to let them roam is to help with bugs. Who needs to spray your yard when chickens can just eat the spiders. Speaking of spiders, check out what we found in the bathroom today. I don't think I'll ever be able to pee during the night again. 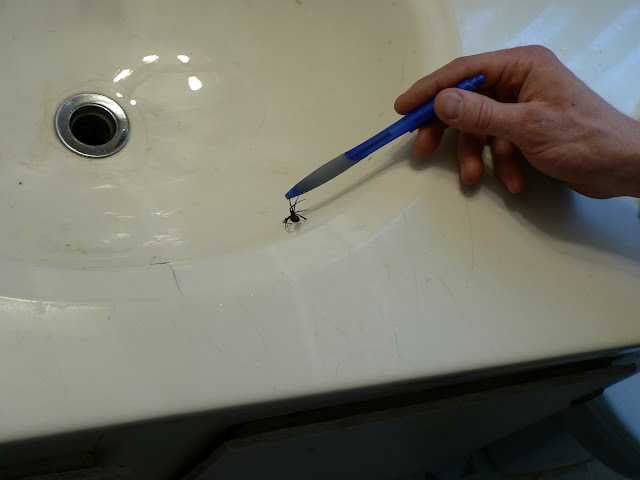 It's a Black Widow FYI. Awesome. Maybe I'll let the chicks roam the house too. Ok, maybe not.

Happy Friday! Anyone Hunger Gamin' it up this weekend?