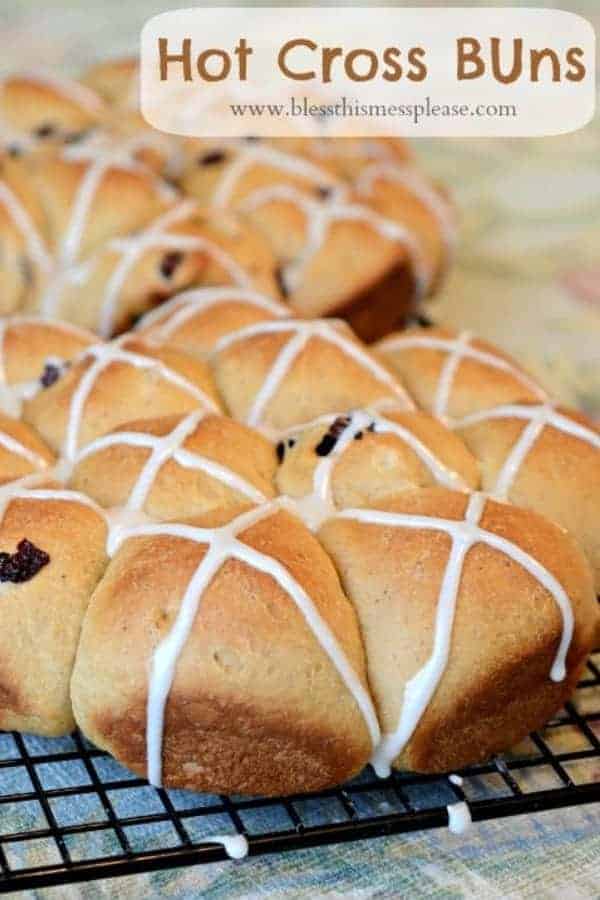 Whole Wheat Hot Cross Buns are a light sweet bread with fruit and a simple glaze on top. Think of them as a light and moist cousin of the cinnamon roll without all of the calories. 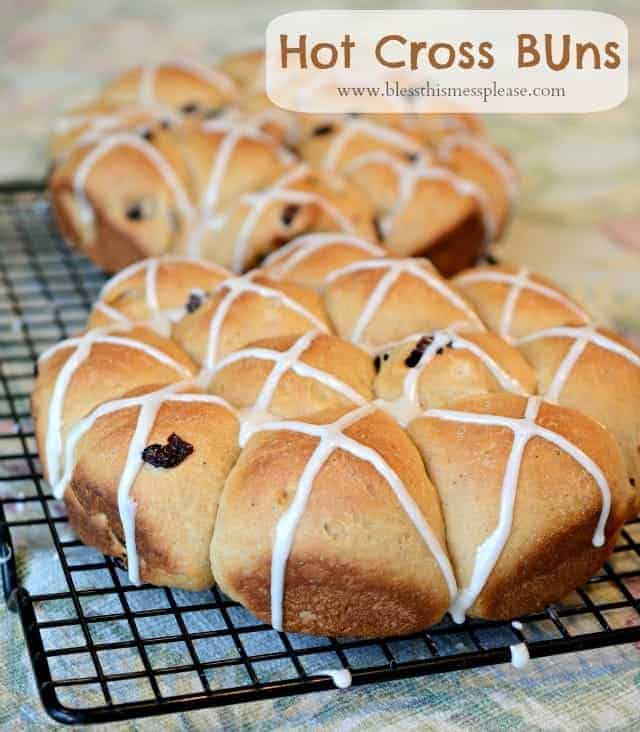 I'm so excited. We have another awesome giveaway today.

In January when I was contacting companies I love to see if we could work together, one of the very first emails I sent was to King Arthur Flour. My mom loves them (and my mom is never wrong), I won a giveaway from Bakeaholic Mama last year from King Arthur Flour which got me on their mailing list (the catalog that comes in the mail is the stuff my dreams are made of...), and I've been borrowing the King Arthur Flour Whole Grain Baking cookbook from the library for years. When they said they would love to work on a project together I knew just what I'd like to do - hook you all up with that awesome whole grain cookbook!

So they sent me two different kinds of whole wheat flour and their Whole Grain Baking book to work with and I have been in love. In the last three weeks I've made seven recipes from the book and they are all wonderful.

Remember how I love America's Test Kitchen because their cookbooks are like attending a cooking class? They are so full of great knowledge that really teach you why and how to do things. We'll America's Test Kitchen and King Arthur Flour are two peas in a pod. They really are BFF companies in real-life and a lady from America's Test Kitchen even wrote one of the chapters in the King Arthur book. Score! You'll feel so much smarter after reading the book and it is a must-have for anyone serious about understanding and getting good at baking with a variety of whole grains.

Now on to the recipe! I whipped up a batch of whole wheat hot cross buns the other day and this was definitely the best recipe I've tried. What are whole wheat hot cross buns you might ask?! Well it's a light sweet bread with fruit (in my case homemade dried cherries!) with a simple glaze on top. It's traditionally eaten after Lent and is very much a spring and Easter-time food. I plan to serve these with our Easter breakfast because they reheated very very well the second day.  You'll love them, I promise!

And don't get so excited about the buns that your forget to enter the giveaway at the bottom of the post! King Arthur Flour has generously agreed to give away a gorgeous hardback copy of King Arthur Flour Whole Grain Baking along with a coupon for a free 5 lb. bag of their flour! This book is a great resource that you will want on your shelf!

Where did the name Hot Cross Buns come from?

Hot cross buns may date back to the 12th century. From what I researched, a monk made these buns and used the icing to form a cross in honor of Lent ending. These buns became a symbol of Easter and are traditionally served over that holiday.

Can I use active dry yeast instead of instant yeast?

When is the best time to frost the buns?

Let the buns cool for at least 15 minutes before adding the icing or the icing will melt right off. Pipe the icing in the traditional cross pattern across the top of each bun and serve warm. 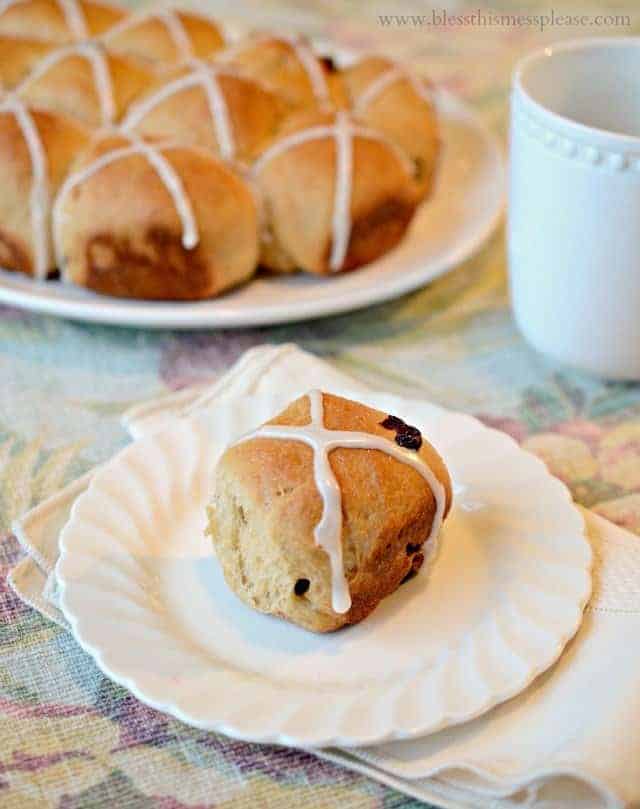 Whole wheat hot cross buns are a light sweet bread with fruit and a simple glaze on top. Think of them as a light and moist cousin of the cinnamon roll without all of the calories.

I had a lot of extra icing, so I just served it on the side and those who wanted to could spread a little extra on their bun as they liked.

I used homemade dried cherries and they were amazing.

These are delicious and warmed up very well the second day.

And now for the goods! Just use the gadget below to enter, it's very simple!

Disclosure: King Arthur Flour is providing the prize for the giveaway and doing the shipping. They sent me the book and 2 bags of flour in the mail to work on this post with. I wasn't paid to post or for my gushing, I just really like them, and you will too!

Here are some more bread recipes you should try:

Whole Wheat Hot Cross Buns are the light and moist cousin of the cinnamon roll without all of the calories. I know you'll love this sweet bread with fruit and a simple glaze on top.