0
Items : 0
Subtotal : $0.00
View CartCheck Out
Subscribe
Create an Account
Bless This Mess > Uncategorized > Fremantle Prison Tour
Good day mates! I’m still enjoying my stay in Perth, Australia and thought I’d share some of the adventure with you. I was debating whether or not to post trip pictures here – it is a food blog after all – but I’ve decided to go for it. If you were in Australia I’d want to see your pictures!
Yesterday I went to the Fremantle Prison in Fremantle, Western Australia (WA is the state). When we were in Sydney two years ago I went to the Hyde Park Museum, which was the prison in Sydney, and it was one of my favorite stops. There is something terribly interesting about these historic prisons that draws me to them. I knew I’d like the Fremantle Prison and I was right.
I took a ferry down the Swan River to Fremantle which is a port city right on the Indian Ocean. Most of Australia’s major cities were originally English convict settlements and this is the case with Fremantle. Convicts from England built their own prison in the middle of the 1850s and the prison was used as such until 1992. The grounds are massive and it is the largest prison in Australia. 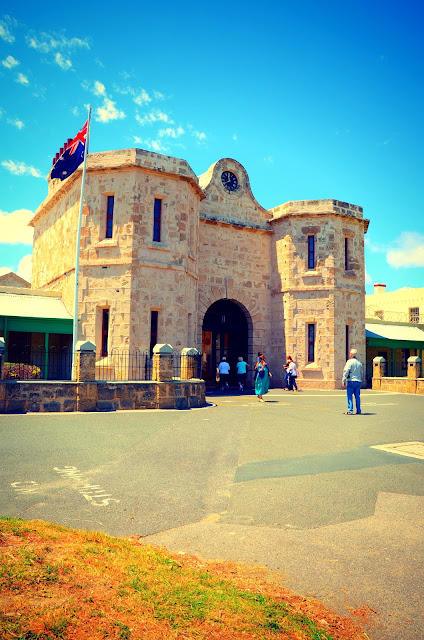 After the prison was closed in 1992 restoration of the site began and it is now a National Heritage Landmark. I took an hour-and-a-half guided tour of the massive prison and am so glad I did. There was so much to learn and see, and having a guide to tell you all the stories and secrets was well worth the $18.

This is the processing/booking room. 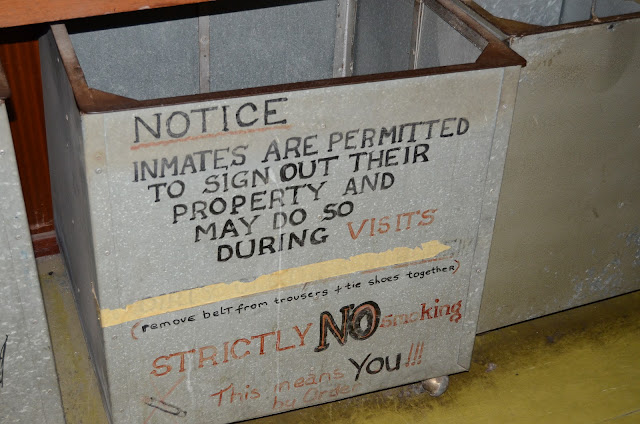 The inner courtyard past the gate. The large building you see is where prisoner cells are. 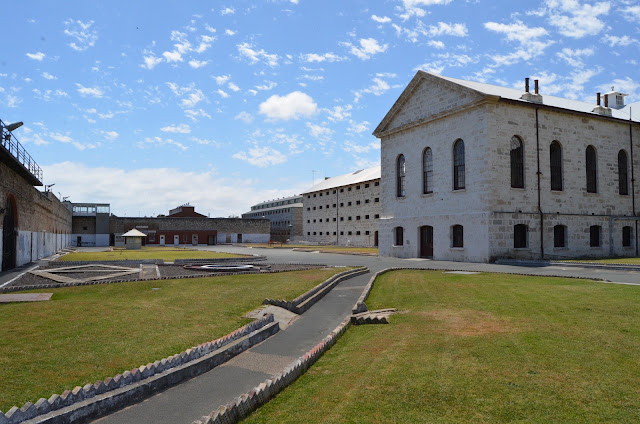 A huge razor-wire-topped wall surrounds the prison. Below it here were the prison gardens that helped feed and provide work for inmates. The gardens weren’t always allowed to grow because often a strange herb would be found growing in the tomatoes from time to time… 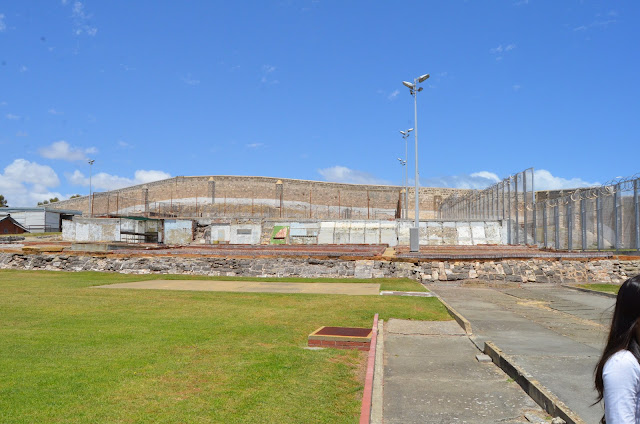 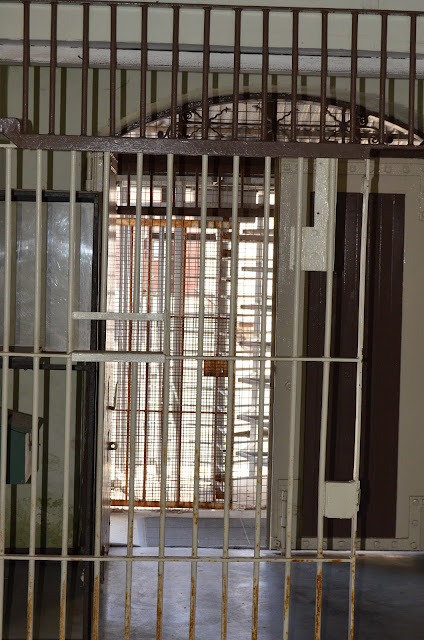 This net is called the suicide net… obviously meant to stop someone from hitting the ground if they jump from a floor above. 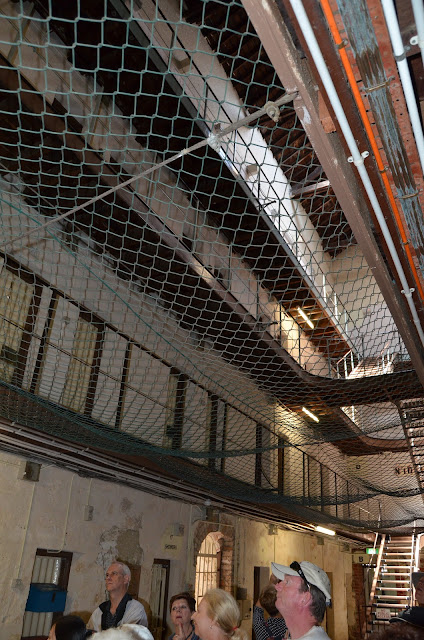 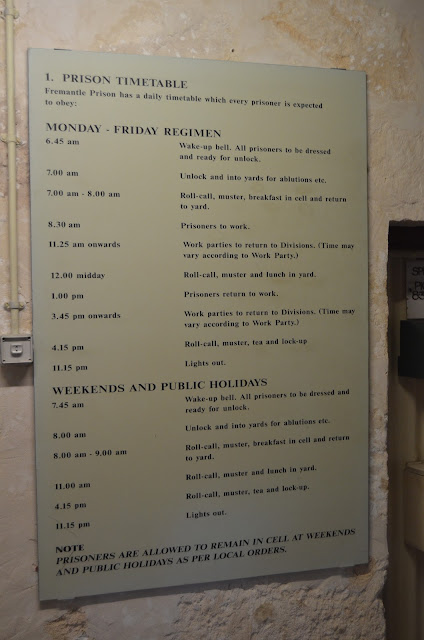 Convicts could work in the prison for small wages, and working in the kitchen was the best job of all. Kitchen workers were allowed to eat as much hot food as they liked, could watch TV while working, and were allowed to shower daily because they were working with food. This locking-cabinet is where all of the kitchen utensils were kept. There was an extensive checking in and out process and stealing any of the items would result in losing the job. I’d be nervous about letting criminals have knives, too! Look at the size of those things… 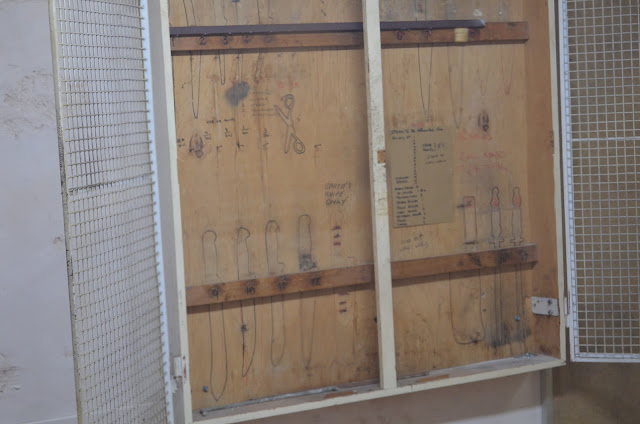 A picture of the kitchen in use: 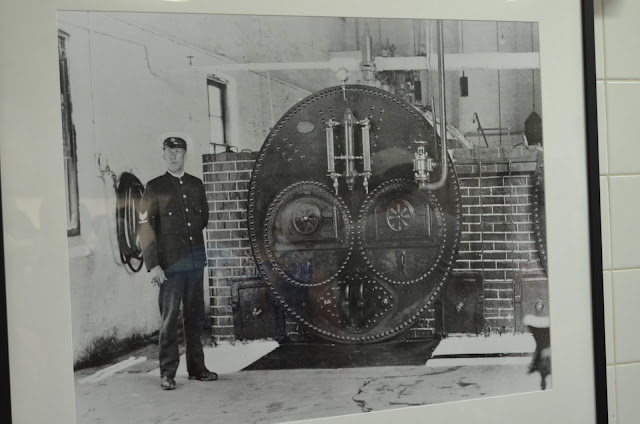 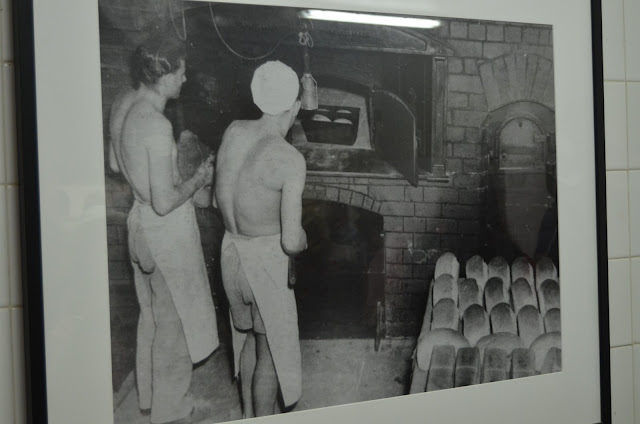 If the men didn’t have jobs they were sent outside to block yards (all year long, regardless of the weather, and a shelter house wasn’t added until the 1960s!). A guard would stand and watch inside of a locked holding area. The men were essentially free to do as they pleased. If a fight broke out the guard didn’t stop it, he just wrote down who was involved and they would be punished later. It was too dangerous for guards to go out into the yards and the yards were pretty dangerous for the convicts too. 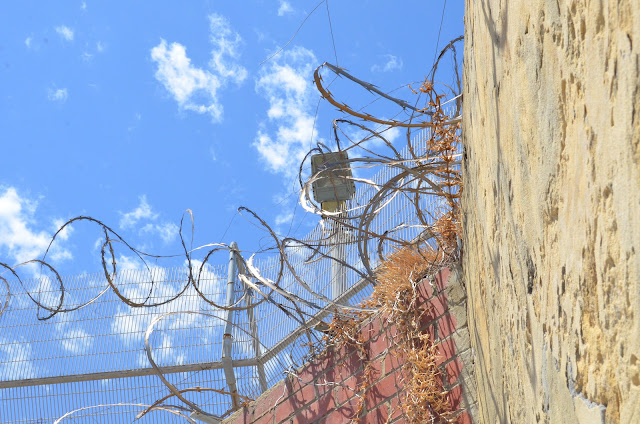 One of the block yards. There are toilets behind the little doors in the walls. 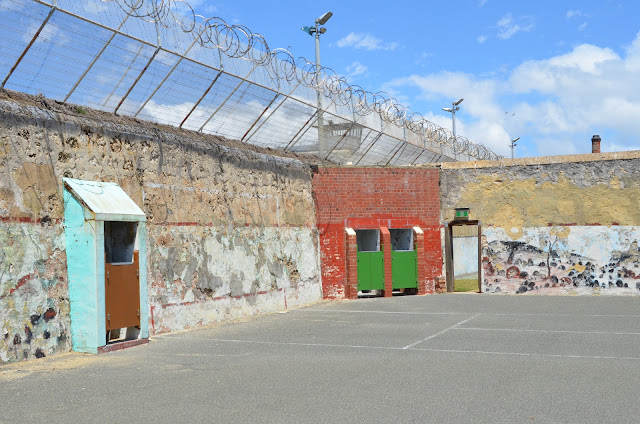 Inside is a church. I bet it’s the only church with iron bars and a lock on the door! You can actually get married there and lots of people do. 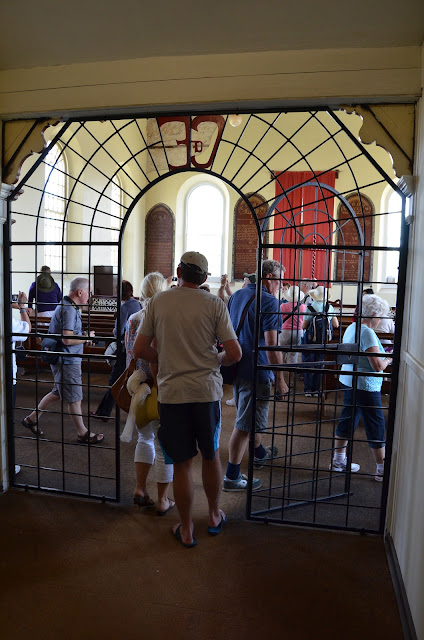 Ladies and Gents bathrooms (isn’t that cute!) in the office/administration area of the prison. 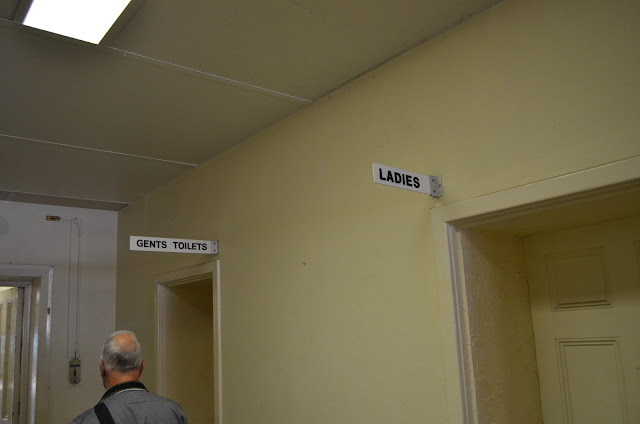 Inside you can see how the cells have changed over the years and they have changed very, very little. This prison was known for having terrible living conditions for the prisoner and guards alike. The cells are some of the smallest in the world. 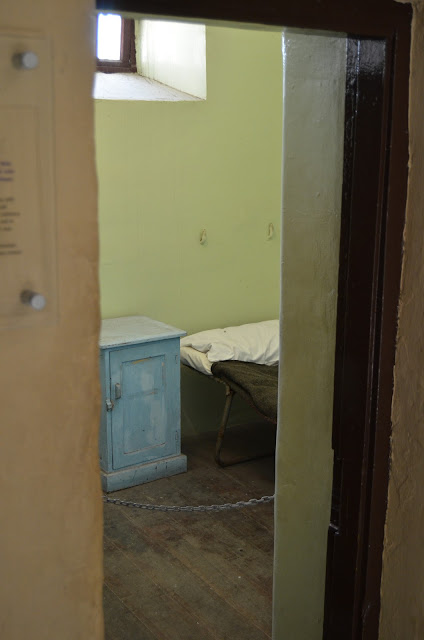 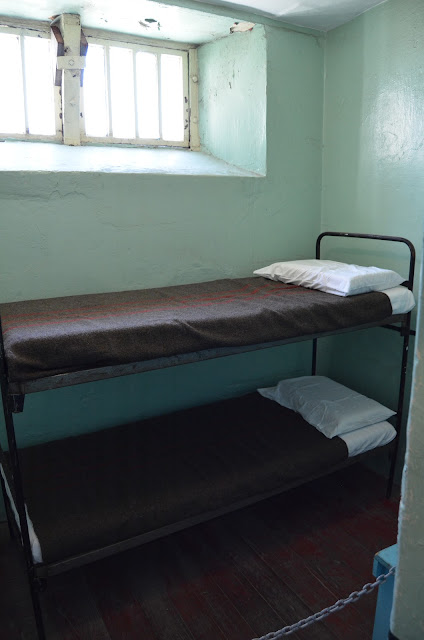 This prisoner was allowed to paint his walls for “therapeutic reasons”. I’m so glad they left his work and we were allowed to look at it. It was incredible. 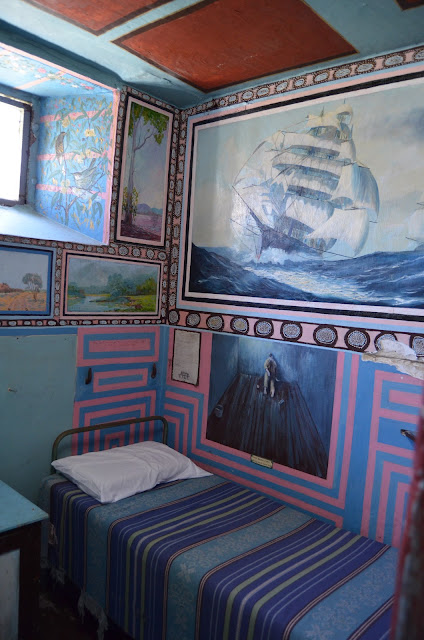 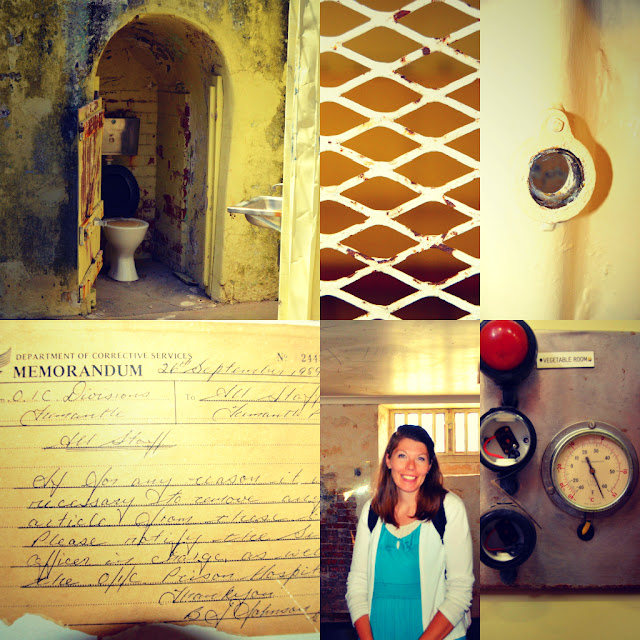 I tried to look closely and notice little things. I think I like the prison because it’s so real and raw. People lived and died here, people were kept from their families because of choices that they made, life happened here on a level that I can hardly comprehend. This was the most touching and personal little piece of history that I found. On a wall out in the block yards I found this: 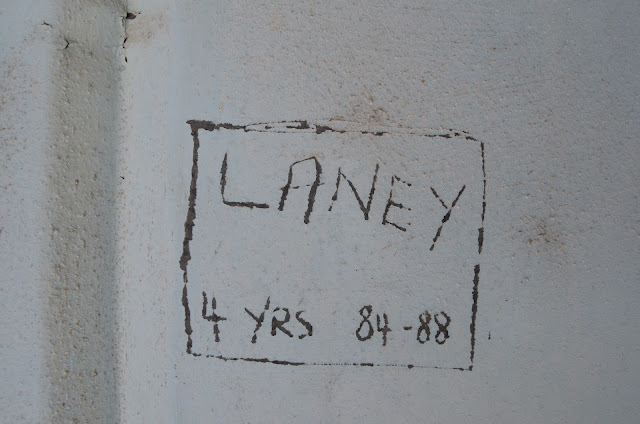 In my mind someone commemorated the loss of a child. Theirs? I don’t know, but a child nonetheless. It was scratched in the wall outside. Vandalizing things was punishable, but someone took the risk to record a life event that happened while they were locked away. I’m sure this man’s heart burned the day that Laney was buried and he could do nothing but remember her from inside the walls of this prison. This put a lot of reality into the visit.

This is a rusty basketball hoop outside in a block yard. 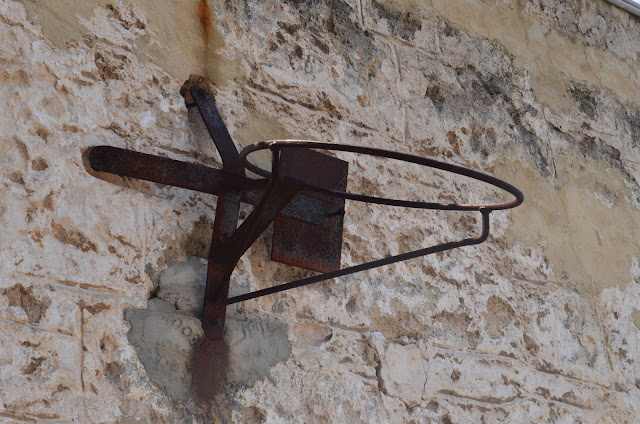 This is where the officers would watch the prisoners in the yards. The turn-style was added in the 1980s after a huge inmate riot where 6 guards were taken captive and parts of the prison set on fire. The riot lasted for 18 hours and amazing enough, no one was killed. 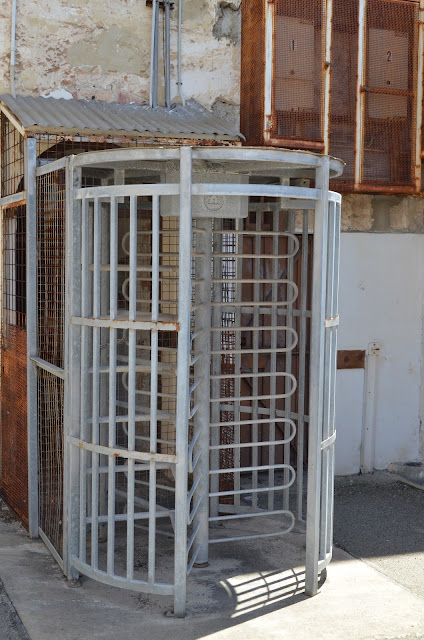 The riot was because the prisoners were sick of the living conditions. The temperature that summer was super hot and some of the cells recorded temperatures of over 120 degrees inside. There was also no indoor plumbing in the cells. Prisoners used a bucket until the prison closed in 1992! Sick. The guide said they waited a year to start renovating so that the building could air out because the smell was unbearable. 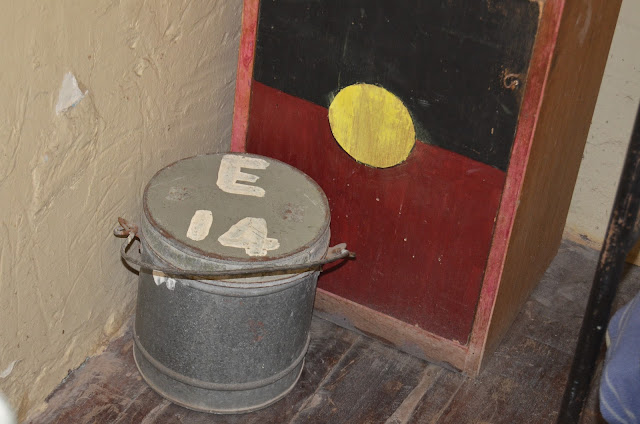 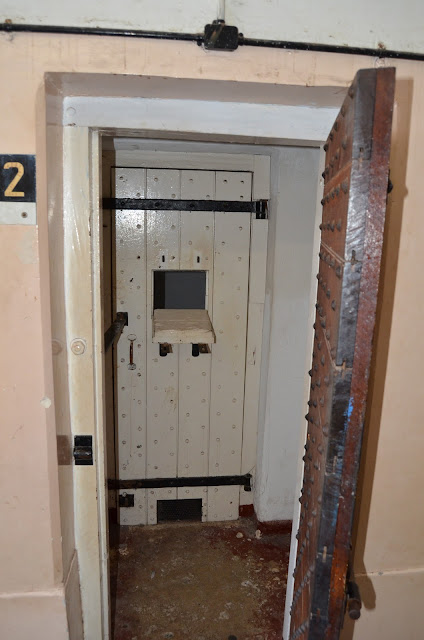 Forty-five people were hanged in this prison and the guide told us how their last day went. It was very sobering. The prisoner was brought to this cell before having a bag placed over his head and then walked to the gallows. This window would have been their last glimpse of sunlight and the sky before they died. 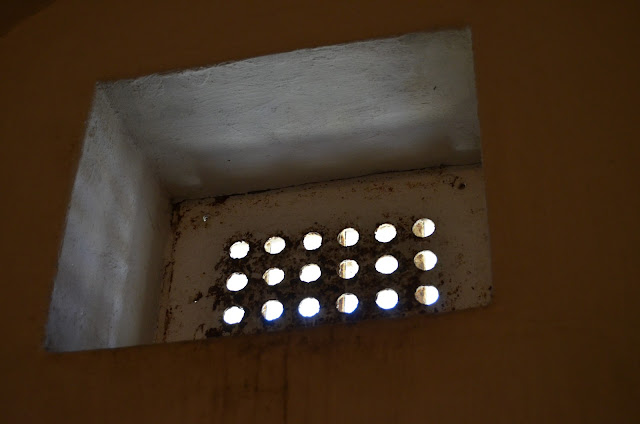 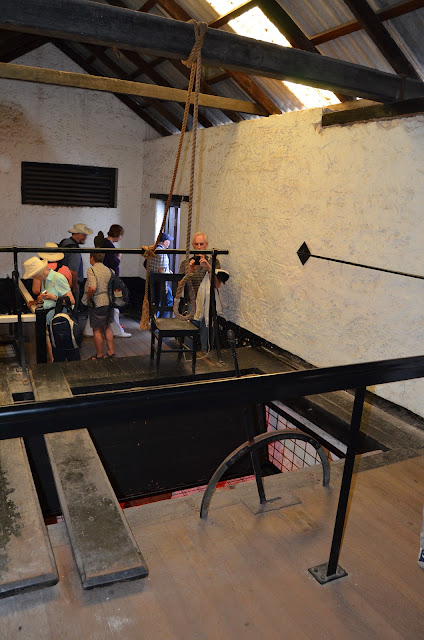 Double locking door to the gallows. 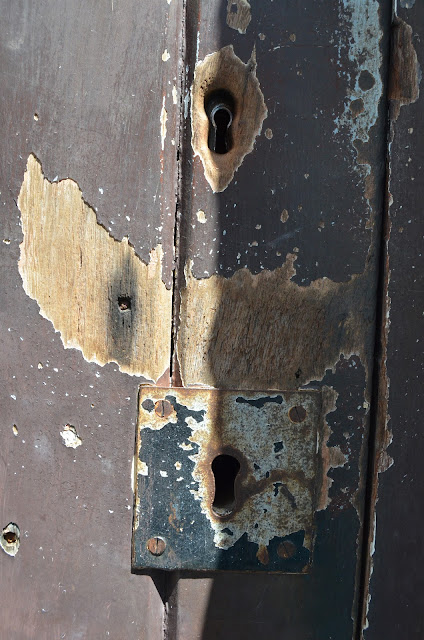 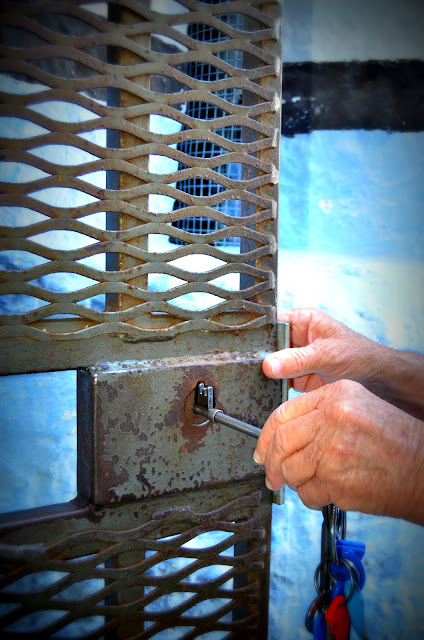 Pretty neat, huh? Australia has such a cool history and that has been one of my very favorite things to learn about on my trip here.

Today I’m exploring downtown Perth, so be expecting something about that soon.

Thanks for stopping in,

Keep in touch! Blogging is way more fun when I get a chance to connect with you.
I frequent Facebook and Pinterest most, so by all means, tag along and say hello.

How I love me a prison tour. Loves all the little touches. Way to tour lady, you fancy fancy lady.

Hooray!! Joy all around! Hens are doing good, and happy bday Thomas tomorrow (or probably right now your time!)

This is very interesting. Thanks for sharing – love the pics.

Fascinating. Wish I was there exploring it all with you!

The more I read your blog, the more I think…………..where have you been all my life?! You seriously like and do alot of the same things I do! I love it! We need to hang out!:)

This was a really cool post! I loved learning the history of it!