Drama Llama Poem for Girls Camp to read the first night to your girls to help set the ton and expectations of camp for the week.

Have you all read the Llama Llama books by Anna Dewdney? We are in love with them at this house. I own most of them and just found out she even has a newer collection of board books which we got for the baby's first birthday. The llama books are great because they are so fun to read. Anna's writing style is unmatched in rhythm and meter; I love reading them out loud. Check them out from the library!

Anyhow, in preparation for Girls Camp I wrote a poem of sorts using the Llama Llama books for inspiration. I am super excited for camp. I love camp songs, food, skits, crafting, hiking, and not showering. The thing I am most worried about is the girls. Is that terrible? I'm just helping with camp; I'm not with the girls on Sunday, and honestly don't know many of them very well. I know I'll get to know them, camp equals serious bonding, but in an effort to get things started off on the right foot I felt this poem would be fun. I'm making a sign to hang at our campsite with a llama picture and "No Drama Llama Allowed" written on it. I feel like this will be a fun and light-hearted way to address inevitable issues. If someone is having trouble helping or whining, I can just say, "What is that? Is that a drama llama that I hear?!" I'll let you know how it works. 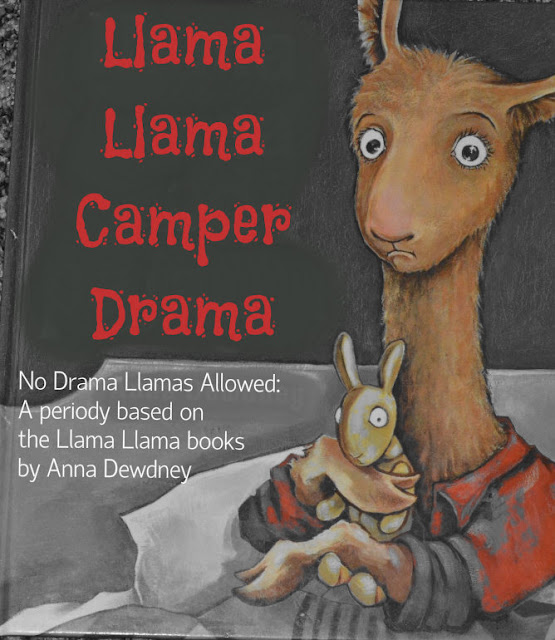 Llama Llama packs her bag.
Hugs her mama
And her dad.

Llama Llama
Goes to camp,
Without her mama
Like a champ.

Sure she’ll miss them this is true,
But at camp, there’s no time to be blue.

Get to camp and set things out.
But when llama’s asked to help,
Llama Llama starts to doubt.

Time to laugh and hike and play.
Wait a minute, what’d she say?

Gobble up dinner and laugh at a skit.
Bedtime already? Llama pitches a fit.

I have to sleep here
While you get a cabin?
Not with her and her,
They don’t stop blabbin’!
No electricity in there.
How do I blow-dry my hair?

Llama llama go to bed,
After all your scriptures are read.

Wakey Wakey Leader Says
But I can’t, I’m feeling dead.
It’s too early, My hair's too curly,
I want to shower, come back in an hour.

I miss my ipad and my phone,
I bet my boyfriend’s all alone.

Clean the toilet?
No, not me!
This llama just won’t go pee.

Sneak off to another ward,
When llama starts feeling bored.

She was looking at me funny,
Cause I still sleep with my bunny.

I swear I heard them say my name,
While playing some ridiculous game.

We aren’t friends at high school,
So why should things here be cool?

She was rude and mean and ornery,
Where oh where is my dear mommy?

Drama llama runs the show
Because she wants you all to know
That she’s not happy, not one bit
This drama llama will throw a fit.

No one likes me
It’s not fair.
No one even really cares.

Dear llama llama, Don’t you know
That we all really love you so?

Long meetings and prayers were handled with care,
With hopes you’d grow a testimony to share.

We want you at camp
To learn and to grow,
We want you to go home
With something to show.

Drama llamas are no fun
And ruin the day for everyone.

Instead of crying and boo-hooing
Let’s talk and counsel and discuss,
So that camp's not spoiled for the rest of us.

When you come to camp
Leave behind the drama.
Don’t you know we are all sister llamas?

Forget what happened at school this year.
Help wash dishes like a good little dear.

When it’s time to wake up
Let’s do it with a smile.
We have a lot to enjoy this week
Like walking multiple miles.

When you are tired, thirsty, and hot
Don’t complain, we're all in the same spot.

Let’s work together
Me and you.
We’ll become stronger
That’s just what we’ll do.

We’ll learn and we’ll grow
And find strength in His light.
We’ll work harder together
By day and by night.

This camp is for girls who are kind and who care,
So let’s all remember
No Drama Llamas Allowed!

2019 UPDATE: This poem has been used a quite a few camps and the girls LOVE it! I normally have them get all comfy in PJ's the first night and tell them I'm going to read them a bedtime story. I bust out the book and they laugh but then the words are different than they have heard.

Throughout the week if girls are feeling whiny, unhelpful, or catty I'll make a casual "Is that a drama llama I hear?!" comment and they get the idea that maybe they could think about their attitude. It was an easy way to bring attention to their behavior without feeling naggy or like I'm calling them out to directly. It's worked well for the camps I've been at for sure.

Happy Camping friends! Hope you'll pop back on the blog and check out some recipes too.